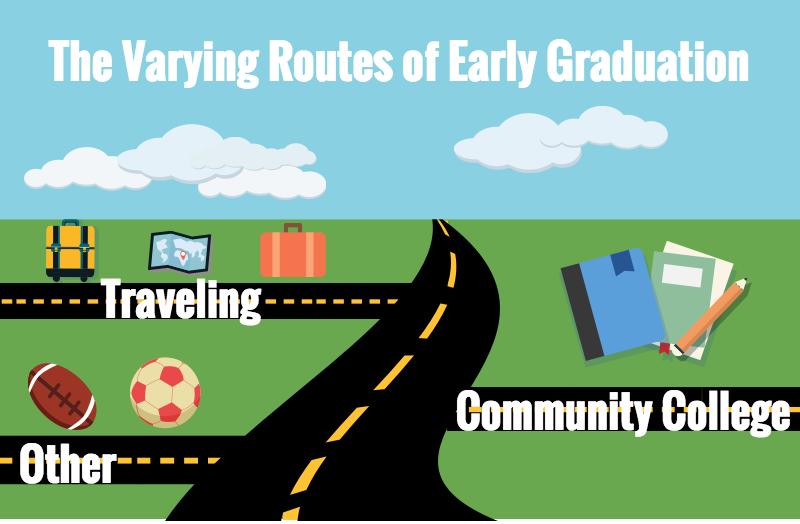 For the majority of seniors, completing finals in December earns them about three school-free weeks before entering back into their regular public high school life. For six seniors who selected to graduate a semester early, it meant the last time they would sit in the green-tiled, fluorescent-lit classrooms of Redwood High School.

An option typically brought up during junior conferences, many students opt to graduate early from high school to get ahead in community college classes, pursue travels or escape the high school environment, according to counselor Tami Wall.

“Everybody has their own reason but I think the majority is to do something else valuable, to avoid that senioritis,” Wall said.

As for missing out on school-sponsored spring semester activities such as prom, grad night and walking during graduation, the students who graduate early are still able to participate in all of these events. 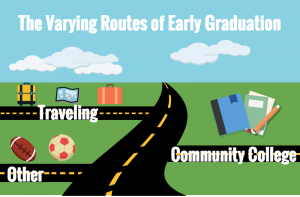 “Even though they are not physically in class anymore as of after Christmas break, everything is still as if they were a senior,” Wall said. “They are still the Class of 2016, they are just finishing a semester early and they have every right to participate in those Class of 2016 activities.”

Franchy Mascaro is one student who graduated early this academic year.

“I decided to graduate early because I kind of knew I had to do some soul searching,” Mascaro said. “I realized I wasn’t great at high school. In middle school I was a straight-A student but as soon as I got into high school I didn’t keep up with my grades and I wasn’t a great student.”

Leaving Redwood behind, Mascaro took what Wall considers the more common route: taking classes at College of Marin and getting a job.

“Having all this time to focus on myself is nice, you get to see what you become and how you have to deal with it,” Mascaro said. “ I’ve been told by a lot of my aunts and uncles that I’m a lot more independent now and they see me more as an adult now since I’m in college and have a job and am driving around.”

Jake Curhan, who graduated early to begin training for football, concurred that he feels he is being viewed more like an adult. He is one of the five football recruits who agreed to graduate early and begin college classes. The remaining 20 players will start during the fall semester.

“You’re independent and have to do things for yourself, which is nice, but sometimes you wish you had someone there who could help you out,” Curhan said.

His decision of graduating early was encouraged by the ability to start classes early at UC Berkeley as well as participate in spring training for their Division One football team. Curhan believes his choice will pay off in the future since he will enter the fall semester with college classes complete and familiarity with college football.

“There’s times where you waver back and forth but I think ultimately when all the other [football players] show up and they are having a harder time figuring out things, I’ll be happy that I did it,” Curhan said.