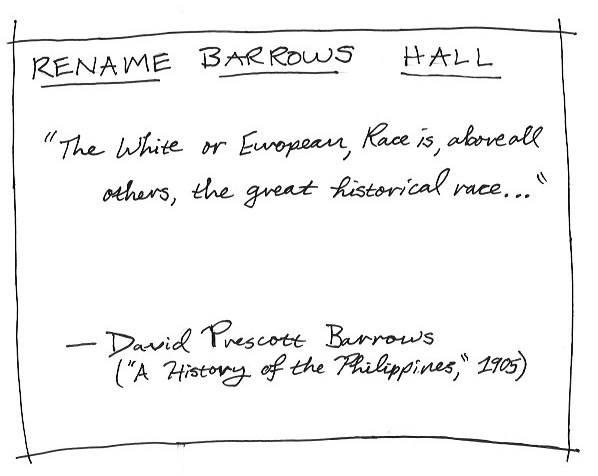 At UC Berkeley, students have called for the renaming of David Prescott Barrows Hall, condemning its namesake for what he wrote in his “A History of the Philippines.” “The White or European, Race is, above all others, the great historical race,” Barrows wrote in the 1905 book.

In recent years, students across the country have attempted to heighten awareness of the legacies of historical figures whose names appear on their campus buildings by petitioning for their removal. These figures include prominent politicians like Thomas Jefferson, Woodrow Wilson and John C. Calhoun, each of whom has a contentious historical reputation. Students’ protests have been met with backlash from those who see their calls for removal as attempts to erase history. 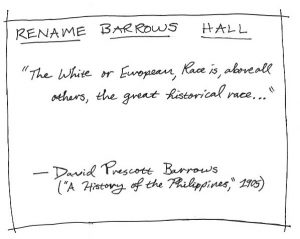 Those who oppose the calls for removal can’t be blamed entirely for their lack of awareness of all of American history. From a young age, many Americans are taught by parents and teachers that any exposure to our country’s historical wrongdoings is an attack on patriotism.

A new trend of learning American history in its entirety seems to be on the rise, however: Students are learning U.S. history from all perspectives, and not just through the comfort of a red, white and blue lens, as evidenced by the student protests. With each call for the removal of a statue or name, students show the public that we, young people, will apply the history we’ve learned to make our world more inclusive.

Many members of older generations are disgusted with the attitudes of younger generations, which they see as anti-American, disrespectful of their history or part of a growing shift toward “political correctness.” Rather, it is just the opposite—students have the utmost respect for their country, but do not wish to conflate its complex history with the glorification of figures who don’t share their values.

This trend toward political correctness must be welcomed, not loathed. It’s a healthy step along the way of our development as a country. Opponents of political correctness may yearn for the days when culture didn’t dictate that we think so carefully about our words. Unfortunately, for many, those were days of intolerance, and they are better left in our past.

It seems that awareness is the root problem of the conflict, and it’s what young students are trying to convey to older generations through their actions.

It is important to understand, regardless of your perspective on the argument, that most historical figures can’t be perfectly “good” or “evil.” Our tendency to classify a person as one of the two characteristics—excluding the gray area in between—seems a lost cause in the real world. Though everyone is conditioned by their time period and culture, that doesn’t mean the historical figures’ names must remain engraved as the totality of their actions and words comes to light.

Ultimately, we shouldn’t leave those figures’ names etched in stone because when a person’s name is written on a building, it inherently demands respect without question. They, and therefore their reputations, can’t be critically examined from that height.

Instead, we must recognize and honor the figures who stand out in history as true visionaries—the individuals who were representative of their time periods deserve less of our attention than those who were not only able to identify, but actively fight against, the injustices of their time.