Race at Redwood: The Achievement Gap 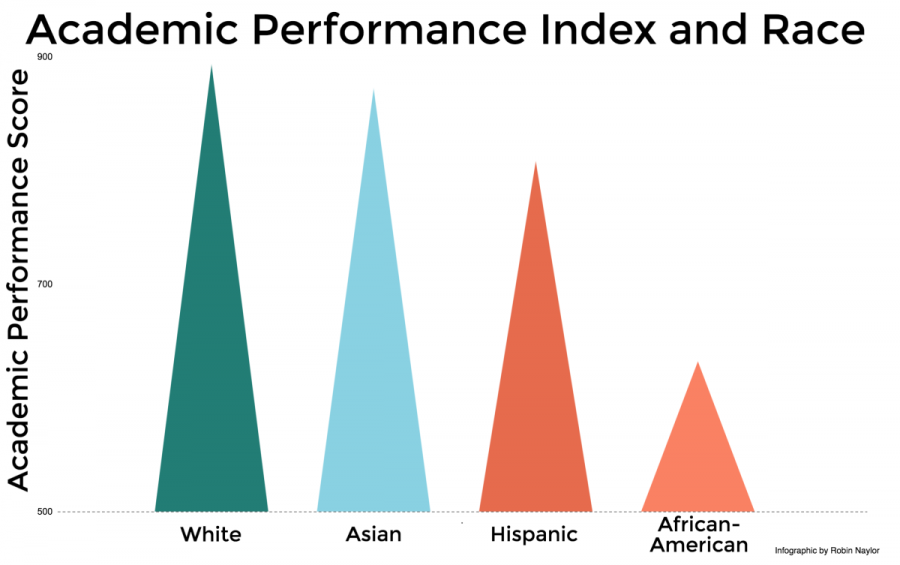 Race at Redwood: The Achievement Gap

by Megan Millard and Robin Naylor

In the April issue of the Bark, we published a series of infographics looking at the academic divide between two groups with disparate achievement: White and Asian students, who make up 83 percent of Redwood’s student body, and African American and Hispanic students, who make up 12 percent of the student body. These infographics were based on statistics from a 2014 report on Redwood student achievement from the Western Association of Schools and Colleges (WASC), which conducts district and individual school reviews every six years.

The Bark talked to people in the Redwood community to supplement the statistics in a further exploration of the achievement gap.

Redwood has garnered many awards in the last decade for its high student achievement, winning a national Blue Ribbon award in 2008 and a California Gold Ribbon award in 2015, given to schools in the top 15th percentile of state schools. In light of the WASC report, however, administrators have acknowledged that an academic gap exists.

According to the WASC report, African American students face the largest achievement gap of minority demographics. There is also a significant gap between Hispanic students as compared to the general population, though this gap has narrowed over the past five years.

The report recognizes the achievement gap in various contexts with extensive sets of statistics. There is a portion of the report looking at the large disparity regarding college eligibility, noting that African American and Hispanic students are underprepared to attend four-year colleges. 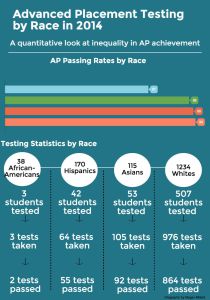 Out of 115 Asian students, 53 students took 105 total exams. Ninety-two of them were passed, making an exam passing rate of 87.6 percent.

Administrators and teachers have been trying to organize support systems such as peer tutoring, academic workshops, lunchtime interventions, and administrator meetings with minority students. This is an effort to encourage students to turn in their work, which they hope will help narrow the achievement gap.

“I think the biggest impact has been in our assistant principals’ meetings with students of color to try to get their perspective,” Sondheim said. “What do they see as things that are going well, what do they see as areas that we can improve on and work on? [We want to] try and take that and act on it.”

The meetings have been part of an effort to better understand the experience of minorities at Redwood, whose scores on the Academic Performance Index (API) are 200 points lower than their White and Asian peers.

API measures the total academic achievement of students by averaging results from the  California Standards Test and the CAHSEE. The 2013 federal 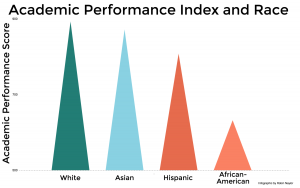 target for API was a score of 775, but generally the TUHSD performs well above this target.

White and Asian students’ API scores are well above the 850 range, but Hispanic API scores just broke 800 in 2012, above the federal target but below their peers within TUHSD. African American scores show the widest gap, rising to above 650 in 2012, but falling below that line in 2013, the only demographic with a downward trend.

As the administration works with teachers to improve the learning environment for students of color —– assistant principal Katy Foster said teachers have been inquiring about techniques to engage participation in class—it has also been looking into ways to allow more kids the opportunity to take AP courses.

“Under Principal Sondheim, the policies of kids getting into AP courses have been [more open]. There used to be many more restrictions for kids getting in,” Foster said.

In the past students had to obtain a minimum score on an entrance exam to enroll in many advanced classes. Now most courses have no testing requirement to enroll.

“It has been a goal of ours to get more kids into AP classes and we have been very successful to opening them up. However, the percentage of African American and Latino students in those classes is lower than the overall enrollment percentage for those two groups,” she said.

While the administration has taken steps to increase access to AP courses, minority students are still opting not to enroll and some have chosen to transfer to other schools within the district.

“I think it’s a challenge being at a school where you are the minority, and in the African American case, significantly so. It can often feel like, ‘God I’d like to be somewhere where there are more African Americans,’” Sondheim said.

Foster mentioned “White culture” as a possible reason for the declining minority enrollment at Redwood and in advanced courses. 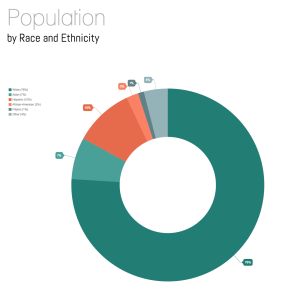 In addition to the lack of diversity within the student body, the district as a whole is also comprised almost entirely of White teachers.

“Look at our staff, do we have a single African American teacher right now? I don’t think so,” Sondheim said.

“We have two African American administrators. We had a Latino administrator up until two years ago, but we have had an easier time finding diverse administrators than we have with teachers,” Sondheim said.

Having so few minority teachers may affect the way students learn, according to a study by H. Richard Milner, an assistant professor of Education and Human Development at Vanderbilt University.

“I’ve noticed that I’ve never had any Black teachers, ever,” said junior Carl Simpson-Heil, who is a minority. “I haven’t really had anybody to look up to besides my mom.”

Simpson-Heil stated that it is important to individualize efforts to raise student achievement and consider socioeconomic background and family expectations.

“[The school] should be more interested in how people are educated from different places–– coming from Marin City or wherever else people of color may come from. I think it’s about [academic] preparation,” Simpson-Heil said. “Is anyone pushing them to be in these classes? The only reason I’m in all these classes or even know about them is because my parents have always pushed me to do it.”

The administration has been using PSAT results to help identify possible candidates for AP courses, according to Pratt. The school looks at the score reports and encourages teachers and academic counselors to reach out to candidates who may not be considering taking AP courses.