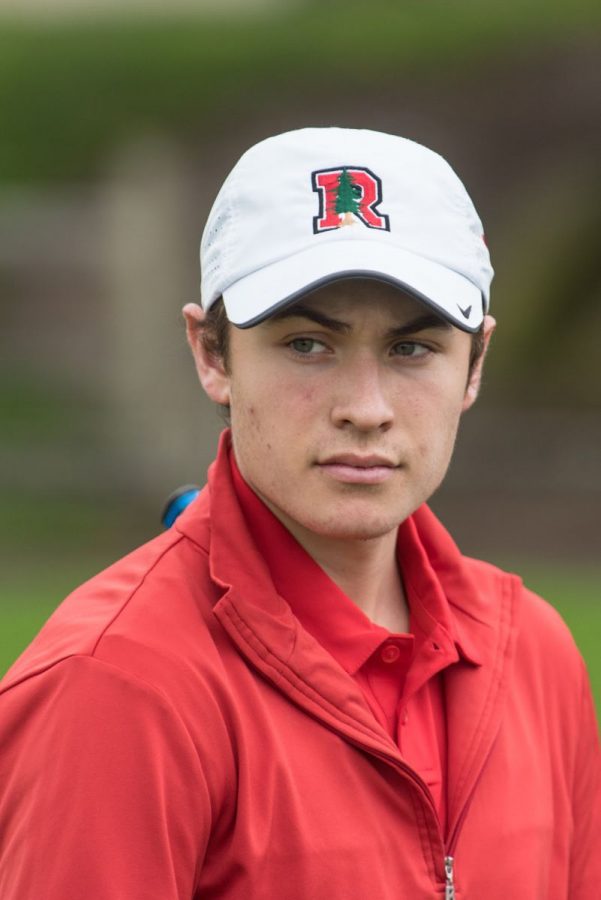 Whether it’s pulling up for a jump shot or swinging back for a powerful drive, Nick Laub’s athletic ability has been on full display in his career at Redwood.

As a captain of both the varsity basketball and golf teams this year for the Giants, Laub has not only showcased his talent as a player, but also as a leader. Considering his status as a four-year member of the varsity golf team and his pivotal role in its success as MCAL champions in 2013 and 2014 and runner-up in 2015, Laub’s leadership on the course has helped his teammates develop.

Teammate Ishan Pherwani attested to Laub’s influence on others and his relaxed nature on the golf course.

“Nick is someone who, even when the team is in dire straights, remains composed,” Pherwani said.

According to Pherwani, his unrelenting positive attitude on the course only improves his play.

“That still doesn’t take away from his intensity and driven nature,” Pherwani said. “He loves the sport, and you can see his dedication when you’re out there.”

Though he may have a focused mindset while on the course, it doesn’t affect Laub’s personality, according to Pherwani.

“Playing with Nick is really uncomparable to playing with anyone else. It’s so much fun to be out there [with him], until all of a sudden you look down at the scorecard and realize how far behind you are,” Pherwani said.

Laub is passionate about the sport because of its quiet, almost meditative nature. The tranquil atmosphere surrounding a golf match provides Laub a time for internal reflection, he said, which is not present elsewhere in his life.

“I love golf because it comes down to a lot of precision and concentration that you don’t get in basketball. In golf, every single shot matters, and having time to focus also gives the time to think,” Laub said.

Laub attributes much of his success to his supportive upbringing.

“My dad gave me a plastic set to get me started,” Laub said. “I swung my first putter when I was about six years old.”

Laub also believes that playing with his older brother, Chris, helped him foster his passion for golf. Because Chris was one of the most talented players in MCAL for the 2013 and 2014 seasons, Nick strived to emulate his game after Chris.

“I think that watching my brother play and overcome all the things that he has to become such a great golfer made me want to do the same,” Laub said.

Playing with his brother not only influenced his enthusiasm for golf, also allowed him to strengthen his fundamentals.

“Playing with Chris was really special because I got to hone my skills by watching him,” Laub said. “It was really helpful to have experienced playing with and learning from my brother.”

Since his brother’s graduation, Laub has grown to be a cornerstone of the team. Laub scored an average of 39 strokes, three over the 36-stroke par for the season, with strong performances against MCAL champion Drake as well as San Marin, hitting par.

Additionally, Laub hit one over in multiple matches, including those against Tam, San Rafael and Terra Linda. Laub’s success this season was apparent on the scorecard, as he led the team in lowest scoring average. He was also recognized as the team’s most valuable player.

Team coach Barry Briggs believes that Laub’s intellectual understanding of the game is what distinguishes him as a strong player.

“He is a very smart golfer, meaning that his decisions on the course are reflective of a player who really thinks,” Briggs said.

This isn’t only shown in Laub’s individual scores, according to Briggs, but in the performance of other athletes on the team as well.

“He has his pulse on the feelings and the attitudes of the team,” Briggs said. “For a coach, it’s really important to have a captain like that who can give you that kind of feedback.”

Briggs summed  up the experience of coaching Laub in one word: “Easy.”

“He is an extension of the coaching staff and yet he is very respected by his teammates,” said Briggs. “And he role models to his teammates the work ethic, the competitiveness, the balance, the demeanor, which are all things that you want in a leader.”

For Laub, whether in basketball or golf, his work ethic was the primary way he attempted to distinguish himself.

“Both in basketball and in golf, the parallel for success is putting in the work that it takes to get better,” Laub said. “Otherwise they’re completely different sports and that’s what, for me, makes them both special.”