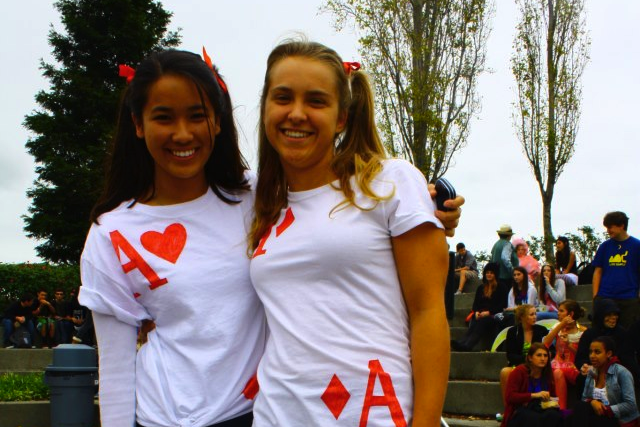 Although a majority of the student body was out with a mysterious and sudden illness on Halloween, many of the students who did attend school came dressed up for the holiday.

Some students took their costumes to the next level, sporting disguises that they’d made themselves, despite the low audience turnout.

Senior Katie Woolard, who handmade her entire dress, said that she was a little disappointed with the number of absentees on Halloween. “It is really gratifying to hear people say, ‘Wow, you made that, that is really incredible,’ so it was unfortunate that the Giants parade fell on the same day. But hey, they won the World Series, so it is a little more important.”

Junior Sarah Ogden, who dressed up as a pair of aces with a friend, said that she didn’t really mind that everyone was absent. “It was more something that we did for the two of us to have fun. There was definitely a different feel of the costume contest though, with only a handful of kids being there.”

Ogden said that they didn’t enter the contest, but later regretted the decision. “We realized after that a pair of aces would be a winning pair, so we were a little disappointed,” Ogden said.

Woolard also had qualms about the costume contest. “I didn’t really fit into any of the categories. If they had a homemade costume category, it would be incredible,” she said.

Woolard said that it took 11-12 hours to make her whole dress. “I cut out the pieces sometime in the first week or two of October,” she said. “Most of it I found myself doing the night before Halloween, so I worked from four in the afternoon until one in the morning.”

Like Woolard, Ogden said that her costume came together the night before. “We were talking the night before Halloween, so we needed to do something simple and that was the favorite idea that we came up with,” Ogden said.

“We just purchased plain white t-shirts and coordinated with what we already had: leggings and sneakers. We just kept it really simple,” she said.

“We had t-shirts that we decorated to have the suit and ace symbol,” said Ogden who was the ace of diamonds.

Ogden said that she has made her own costume for the past six or seven years, but her favorite was when she and two friend went as the trio of Snap, Crackle and Pop. “I think that was the cutest trio or even pair that we have done,” she said.

Like Ogden, Woolard is no stranger to homemade costumes. “My mom always made my Halloween costume, I have never actually had a store bought costume and then maybe eighth grade I started taking more part in the process. It is just really fun to try the different patterns,” Woolard said. “It’s all trial and error.”

Woolward said that Halloween isn’t the only occasion for which she makes dresses. “I have been making dresses now for a little bit, mainly just for big occasions like the Valentines Day party sophomore year and every Halloween since eighth grade,” she said. “Homecoming my sophomore year was also a homemade dress.”

“I go to Jo-Ann [Fabrics] and I just sit there at the table and go through these catalogs that are just full of all these different costumes, whether or not they are elaborate,” Woolard said. “I just kind of go with, ‘Hey, I really like that style of dresses,’ or ‘I really like that look. ‘”

Woolard said that she plans to continue dress-making in the future. “I don’t know how much time I will have in college, and I definitely won’t be able to have my sewing machine with me, so it will probably be limited to more taking stuff and modifying it by hand.”