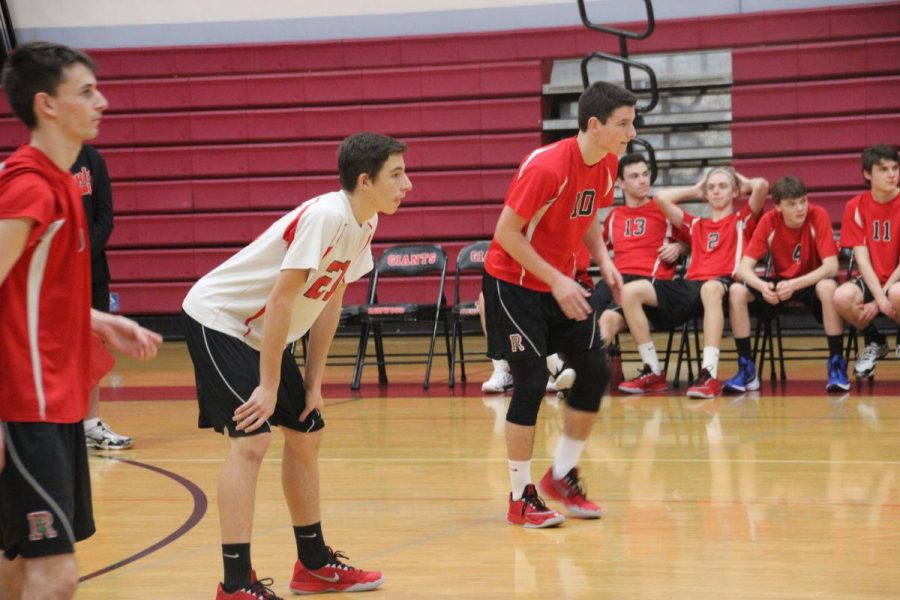 Lupario and Winters prepare to receive the serve. The two's relationship has been crucial to the success of the team.

Quickly gliding through the air, the speeding volleyball crosses the net onto the Redwood side of the court. Junior libero Andrew Lupario maneuvers to get under the ball before it reaches the hardwood, and strikes it, propelling high up into the air. Bump. Another teammate gets into position underneath the now descending volleyball, again driving it into the air and towards the net. Set. The ball is now in perfect position for junior outside hitter Brendan Winters. A jump, a perfect strike, and the ball instantly bounces off the gym floor. Spike.

This has become a common sight for spectators of the boys’ volleyball team this season, largely thanks to the efforts of Winters and Lupario. Many of Redwood’s possessions and winning points begin and end with Lupario and Winters. Together, along with senior Nate Orwig, they form one of the best serve-receive units in all of the North Coast Section.https://vimeo.com/162122396

“We pass together in serve-receive and our coach wants us to talk more to the other teammates, but we pretty much know when we’re going to get the ball and pass to each other,” Winters said.

Off the court the two have been best friends for as long as they can remember, and their athletic partnership started when the two began playing Tee-Ball over a decade ago. They began playing volleyball together freshman year and they say that their friendly yet intense competition has brought out the best in both players.

“I think coming in [Lupario] and two others were the only people I knew,” Winters said. “That really helped because we warmed up together and did things together off the court to strengthen our relationship.”

Lupario agreed, and elaborated on how their friendship has influenced their styles of play.

Together Lupario and Winters have silently emerged as leaders of the team, and their presence on the court is as reassuring to their teammates as it is to one another.

“It’s important to help individual people rather than the whole team because not everyone makes the same mistakes so it’s good to individualize and then put it all together,” Lupario said. “I play my hardest and work my hardest in practices to help younger kids try and learn from it and improve themselves.”

Crucial to the serve-receive unit, both players’ role in each play begins with defending the serve and then repositioning for the spike. While Lupario’s role as libero is more defense-oriented and Winters focuses more on scoring points, the two have dominated the court for Redwood thus far in the season.

“I think that we play pretty well together because we know each other’s strengths and weaknesses so we can help each other out in that way,” Winters said. “[Lupario] is a really good passer so his passing really helps me transition to prepare to hit the ball on the outside.”