Hillary Clinton was always going to be the nominee, and here is why: 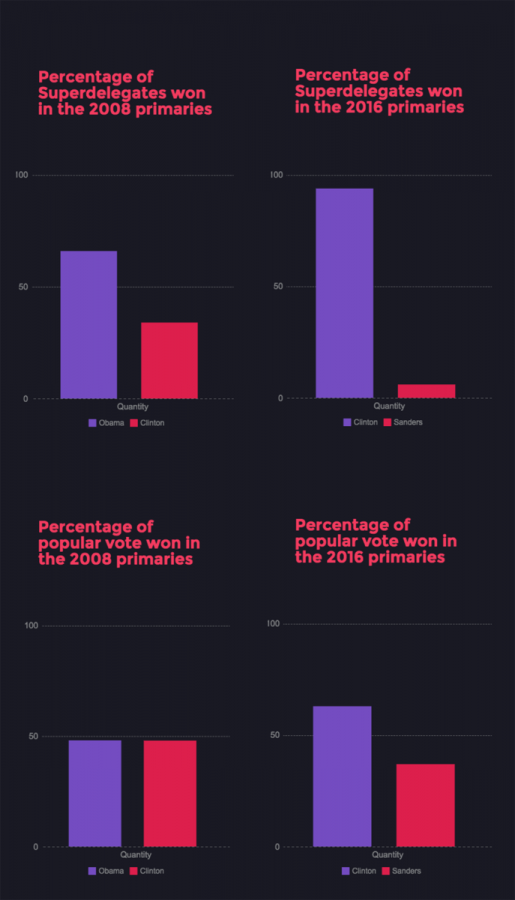 The 2016 presidential race has been dominated by Republican theatrics, as Donald Trump and Ted Cruz lead in the GOP primaries, outperforming establishment candidates and forcing party elites to bank on a limping John Kasich. Now, all the Republican party establishment can hope for is a contested convention so that it has the opportunity to nominate its candidate of choice (likely Kasich or Mitt Romney). However, there is no safeguard if Trump amasses a majority of delegates and automatically becomes the nominee. On the Democratic side, this is not at all the case. In fact, the level of influence the DNC has on the primaries is unprecedented.

For those unfamiliar with the primary system, the way a nominee earns a nomination from his/her party is by attaining a majority of delegates (1237 for Republicans and 2383 for Democrats), which are allotted to the different states based on the population of registered voters. However, the Democratic Party has 715 superdelegates, people appointed by the party to vote for the candidate of their choice. (Each vote from a superdelegate is the equivalent to earning a regular delegate). The Republican Party has superdelegates as well, but they are bound to the candidate that their state voted for. Having superdelegates is the DNC’s way of allowing party elites to choose their candidate regardless of whether or not they receive a majority of regular delegates in the primary. Since all Democratic delegates are awarded proportionately, whichever candidate who is backed by more superdelegates has a significant advantage. This year, Hillary Rodham Clinton, the former Secretary of State, has received excessive support from superdelegates, garnering pledges from 469 compared to the mere 31 who declared their support for Bernie Sanders, while 215 remain unpledged. With the current allotment of superdelegates, Clinton would only need about 42 percent of the vote to earn the necessary amount of delegates, while Bernie would have to get almost 55 percent, a huge discrepancy.

Going back to the 2008 democratic primaries, superdelegates were instrumental in then-Senator Barack Obama becoming the nominee. Neither him nor Clinton were able to reach the delegate mark (2118) without superdelegates (Clinton had 1639.5 and Obama had 1766.5). However, Obama’s edge in superdelegates (463 to 257) led to his nomination.

The superdelegate system may protect the DNC from having to back an outsider candidate (a very real possibility on the Republican side with Donald Trump), but it is the antithesis of democracy; rather than government by the people, it is government by a few. It is time for both parties to scrap their primary systems and install new ones which respect the voice of the people, rather than neglect it. It is our right as citizens to determine who is to lead the nation, not party elites. While we are a far cry away from a one-party system featured in Orwellian literature, allowing parties to have this much control marks the beginning of the decay of the democratic process.