Advisory period to be added to 2016-17 school year 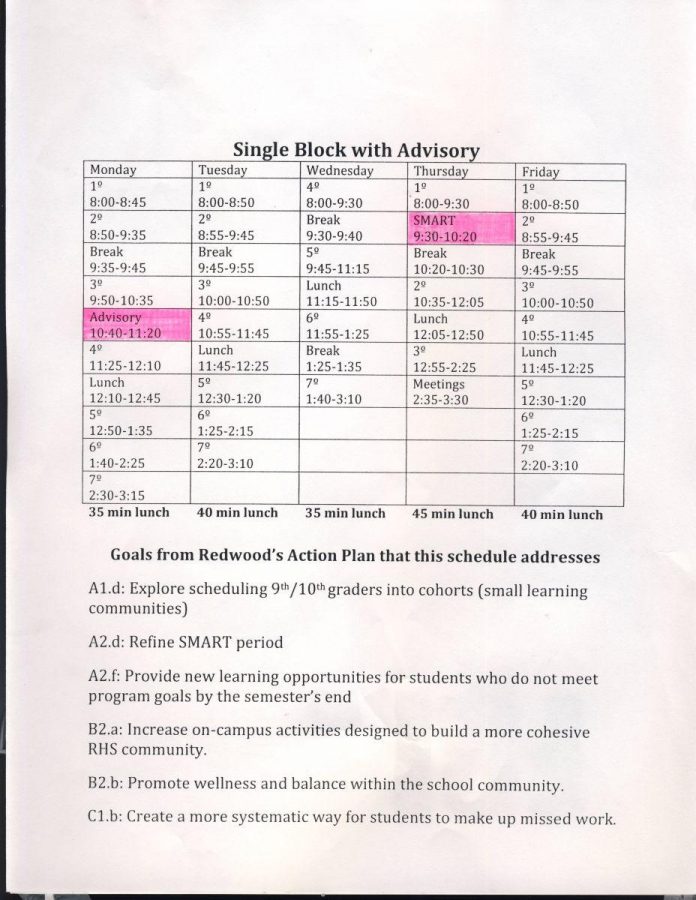 The Redwood Site Council and Link Crew teachers proposed a schedule change which will add an additional advisory period to the current schedule next fall. The schedule change was voted on by teachers and passed by a vote of 77 for, 16 against and 2 absent on Tuesday, March 29.

A number of teachers involved in Link Crew researched and constructed a new schedule that includes an additional advisory period in order to help build the community and reduce stress.

“One of the action plans of the school was to make a community, make a big school feel like a community, reduce stress, and also build relationships between students and teachers,”  said Assistant Principal Katy Foster.

The advisory period would not be considered as academically focused as the school’s current SMART period, according to Foster.

Students would be allowed to access non-academic resources, such as the Wellness Center or student run clubs,  said Erik Berkowitz, Link Crew teacher and one of the main founders of the schedule.

“There are also opportunities where a lot of departments lose time during the school years because there are admin who give the ‘seniors in good standing’ talk or the discipline chats for each of the different grade levels and some of those [meetings] could go on during the advisory,” Berkowitz said.

Over the year, students would have the opportunity to get to know their teachers in a different way due to the second advisory period, according to Foster.

When proposed, some students in Link Crew and Site Council saw it as a break: a time to talk to their friends, or a time to attend Link Crew activities.

Others saw it as a time to work on classwork and complete homework efficiently, Foster said.

There will be three changes to the current schedule, according to Berkowitz.

On Mondays, five minutes will be taken off of all seven periods and homeroom will be eliminated. Students will also be released five minutes earlier on Mondays.

By reducing the duration of the periods, there would be room in the schedule for the 40-minute advisory.

Secondly, on Tuesday and Friday, the five extra minutes in second period for reading The Twig would be added to the lunch period instead. This would create a 40-minute lunch instead of 35-minute lunch, according to Berkowitz.

After creating the freshman houses, the Link Crew teachers and mentors realized there wasn’t a system that allowed teachers to connect with the freshmen.

Several teachers involved in Link Crew were determined to change the schedule in hopes of creating time to meet with their houses, according to Berkowitz.

“We have been talking about having an advisory as a group for a long time and it seemed like now, with the implementation of the houses, that it was a good time to start it,” Berkowitz said.

While working with Beyond Differences, an organization whose mission is to end social isolation in middle schools, the Site Council gathered data and found that a large number of students felt that they weren’t connecting with any adults on campus.

The council also found there was an increased level of stress throughout the student body. This influenced the new schedule, according to Foster.

“One of the ideas among the Site  Council was to have an advisory period. After doing some research in the Site Council and we came up with some ideas, but in order to add an advisory there needed to be a schedule change,” Foster said.

Link Crew and Site Council have simultaneously been collecting data and research to present to any teachers in complaints or questions arise.

Although the idea had been around for a couple of years, the group effectively began to focus on the schedule in October or November, according to Berkowitz.

Once they began to research options, the teachers reached out to other groups by presenting the idea of an advisory period and asking how they might be able to use it. Once speaking, the group received a lot of feedback not related to Link Crew, Berkowitz said.

“There has been conversation in several different groups on campus,” Berkowitz said. “There has been input from teachers, from classified staff, from the food service, from parents, so there has been a lot of different feedback collected.”

Over the six months the two groups have figured out what the schedule will look like, what they might do, which concerns they might encounter, which departments might have issues and how it would all be set up, Berkowitz said.

Many of the ideas they gathered from groups were really creative and purely student driven, teacher driven, or resource driven, which led the two groups to come up with several creative ideas before agreeing on the advisory, Berkowitz stated.

In order for the schedule to be changed, a local option vote against the contract and schedule was required to take place among the teachers.

The contract says that teachers will work seven periods a day, five days a week, Foster said. If a group wants it changed, a vote among the teachers must take place.

In this vote, a mutual agreement between the teachers and the district administrators regarding the created schedule is required.

Student, parent and teacher input is acknowledged in the agreement as well.

“The only people that actually vote on the schedule are the teachers in the union because it more directly impacts the teachers and their contract. You need 2/3 of the staff to vote yes for it to pass,” Berkowitz said.

Since the recent schedule passed, it is connected to a two-year local option contract in order to work out any potential issues that could arise, Berkowitz stated.

In previous years, there have been two propositions to change the current schedule into four days of block periods and one seven period day on Friday.

The ideas were shut down as teachers felt that only meeting three times a week would get in the way of the students’ learning, according to Berkowitz.

While there has been no negative feedback received regarding the current change, Link Crew and Site Council teachers encountered several concerns about the change prior to the vote.

“Certain departments at different times have had concerns. As a staff we have talked about different things and I think that helped alleviate some of the concerns,” Berkowitz said.

A few details about the advisory are still being hammered out but will be settled over the next couple months once the schedule is implemented.

“I think we’ve now seen that there are a lot of benefits to a schedule change and having an advisory,” Berkowitz said.