Despite the fame of hosting, Olympics prove an unstable investment 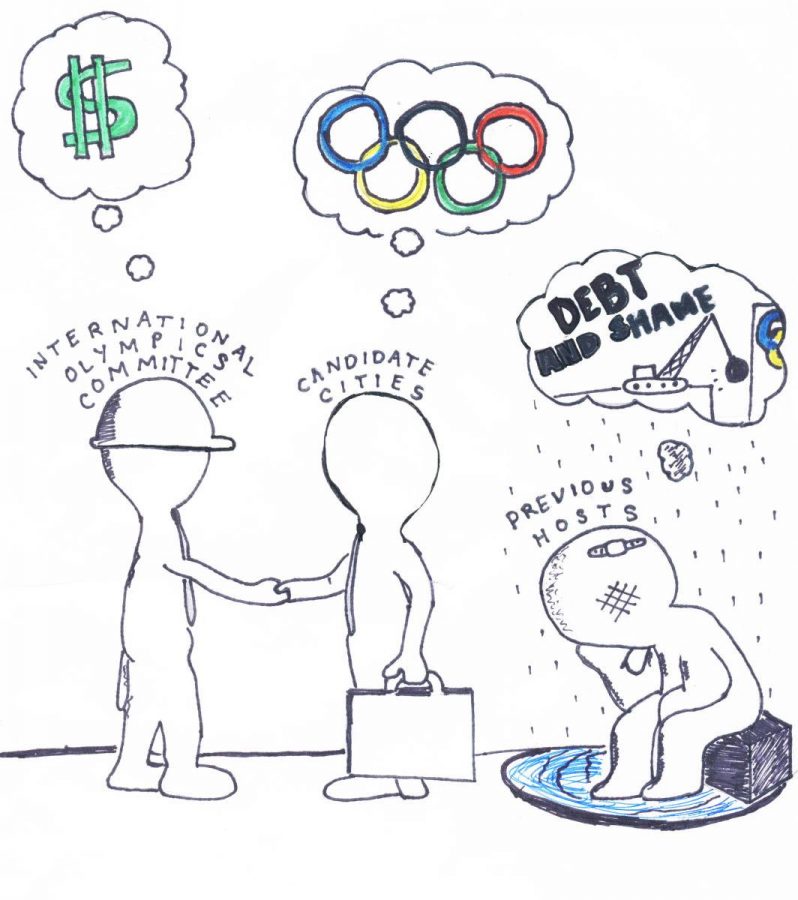 Though it may appear that hosting the Olympics will bring as much wealth as it does publicity, the reality is that, in most cases, it results in a bottomless spiral of government spending.

This June, the International Olympic Committee will select the nominees for hosting the 2024 Olympic Games, and major cities are already making strong pushes for their country’s nomination.

Rome, Paris, Budapest and Los Angeles are the primary candidates vying to host. And though there are apparent perks of increased tourism and the glamour of being the country’s nominee, that enthusiasm and patriotism soon fades as debt from the Olympic Games begins to pile on.

Hosting major events like the Olympics may fit’s seem like a very profitable investment but the further I investigate previous Olympic Games, the more risky an investment to the host country they seem.

For Los Angeles, the candidate representing the United States for the 2024 Olympics, the Southern California Committee for the Olympics Games has already developed the LA24 movement that outlines the city’s plans for hosting.

According to Los Angeles Daily News, hosting the 2024 Olympics in Los Angeles will cost $4.6 billion, and the profits for LA24, the non-profit organization submitting the bid on the city’s behalf, will be only $160 million.

Of course there are categories that aren’t being accounted for in the total revenue, however, unless the state is able to eventually regain $4.44 billion in taxes and tourism from the Olympics, it is truly not worth taxpayer dollars.

Despite this, countries seem to have no problem pouring billions of dollars into the preparation and execution of the Olympics. The Chinese government invested an estimated $44 billion in the Beijing Olympics in 2008, and Russia spent an estimated $51 billion for Sochi in 2014. In Sochi, the Fisht Olympic Stadium, which cost $779 million to build, was only used twice: For the opening and closing ceremony. It is now partially disassembled, and the once glamorous Olympic Park has become quiet.

Athens hosted the Olympics in 2004, and it cost Greek taxpayers nearly $11 billion to construct world-class facilities as well as national infrastructure to accommodate the expected influx of tourism. Twenty-one of the 22 (quite expensive) facilities built in Athens are no longer in use, and were deserted amid the debt crisis. The city lost over $14 billion from the Olympics and has since spiraled into over $360 billion in debt, on the brink of bankruptcy.

The same is true for Beijing, where the city’s once-prioritized Olympic facilities, including the rowing, baseball, and beach volleyball venues, have all been abandoned and are now flooded with garbage and debris.

According to the British newspaper The Independent, in 2000, the Australian government spent $6.6 billion hosting the summer Olympics in Sydney, and the city eventually lost over $2 billion from hosting. The heart of the 2000 Olympic village, Sydney Olympic Park, was torn down and rebuilt into a residential neighborhood in 2005, despite the billions contributed by Australian taxpayers to construct the Olympic center.

This excess spending to host major events is even present in our own community, a mere 45 minute drive from our school. This past February, San Francisco hosted the 50th Super Bowl, the most viewed U.S. event annually. Even though it cost $4.8 million to host, the city’s biggest issue was not the money, but the outrage sparked by hosting.

Super Bowl City stretched nearly five blocks from the Embarcadero to Fremont Street, and though the city’s efforts to honor the game may have stemmed from the best intentions, the fallout for hosting elevated it to the forefront of the media. Just several weeks before Super Bowl Sunday, the city relocated many homeless citizens living in locations near the Super Bowl city to other (oftentimes poorer) parts of the city.

In an article for the New York Times, writer Ian Lovett said, “To tidy up for the tourists, the city’s large homeless population has been swept out of view, which some people here see as evidence that this city, long a seat of leftist activism, has sold itself to corporate interests.”

San Francisco did earn profit from Super Bowl week, over $200 million as a matter of fact, it nonetheless however created a major gap between the government and its people and marginalized a large homeless population in the city.

What San Francisco will do with the Super Bowl earnings remains up for debate, but hopefully the city government comes to its senses and puts its money toward creating jobs, public works, or otherwise improving the city.

The writing is on the wall that city, state, and federal governments need to prioritize effective use of their funds. Though they may find that investing billions of dollars to put on major sporting events is truly worth their wealth and efforts, spending money to improve the general welfare of the public should be much higher on their to-do list.