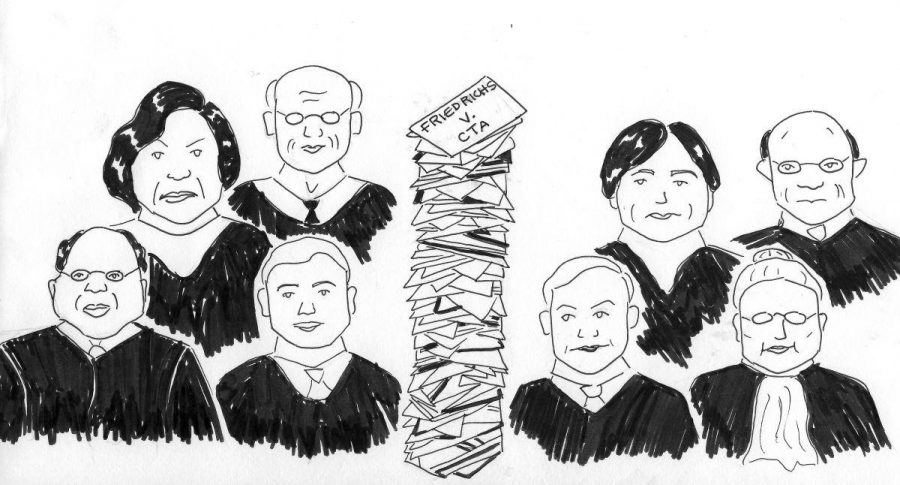 On March 29, the Supreme Court came out with their second 4-4 ruling following former Justice Antonin Scalia’s death in February. The case, Friedrichs v. California Teachers Association, was the first high-profile case to be ruled on this year by the Supreme Court and should serve as a reminder to the Republican majority in the Senate of the ramifications of not holding a vote for President Obama’s nominee Merrick Garland.

Nearly all Republican senators announced within 24 hours of Obama’s nomination of Garland that they would refuse to hold a vote. Many of their messages echoed the words of Senate Majority Leader Mitch McConnell.

“The American people may well elect a president who decides to nominate Judge Garland for Senate consideration. The next president may also nominate someone very different. Either way, our view is this: Give the people a voice in the filling of this vacancy,” McConnell said in a Senate floor statement on March 16 following Obama’s press conference that morning.

Additionally, some Republican senators have asserted that the Constitution does not require them to hold a vote for any nominated justice.

“A majority of the Senate has decided to fulfill its constitutional role of advice and consent by withholding support for the nomination during a presidential election year, with millions of votes having been cast in highly charged contests,” said Senate Judiciary Chairman Chuck Grassley following Obama’s nomination.

According to Article II, Section 2 of the Constitution, “[The President] shall nominate, and by and with the advice and consent of the Senate, shall appoint…judges of the Supreme Court.”

Although the Senate does not have a “duty” to appoint justices to the Supreme Court, by not doing so it is upholding the Constitutional process. The Senate may not be directly violating the words of the Constitution, but it is indirectly preventing the entire judicial system from fulfilling its duty.

The Supreme Court also recently ruled 4-4 on Hawkins v. Community Bank of Raymore, a minor banking case, in addition to Friedrichs v. CTA. Although we are still within the 75 to 90-day period prior to when a justice is traditionally confirmed, it is unacceptable for Congress to allow future cases such as Whole Woman’s Health v. Cole––one of two high-profile reproductive rights cases being heard this year––to be decided on in the same manner.

The most striking issue with the position that Republican senators are taking is that they are claiming to withhold voting to give opportunity to the democratic process and to leave the politics out of the Supreme Court. Only after the March 29 ruling on Friedrichs v. CTA, which reverted to the appellate court decision which favored unions and democrats alike, did 14 Republican senators agree to meet with Garland at all.

The senators themselves are the ones letting the political opportunity cloud their judgement rather than accept the fact that the democratic process worked in 2012 when the American people elected Obama to a four-year term.

While the Senate technically doesn’t have a Constitutional responsibility to hold a vote for Garland or any other potential nominee, it will prevent cases like Friedrichs v. CTA from being served by the justice system. Congress should do its job by considering Merrick Garland as a Supreme Court justice for the country they swore to serve.