Prep of the month: Loren Greene’s life on the ice 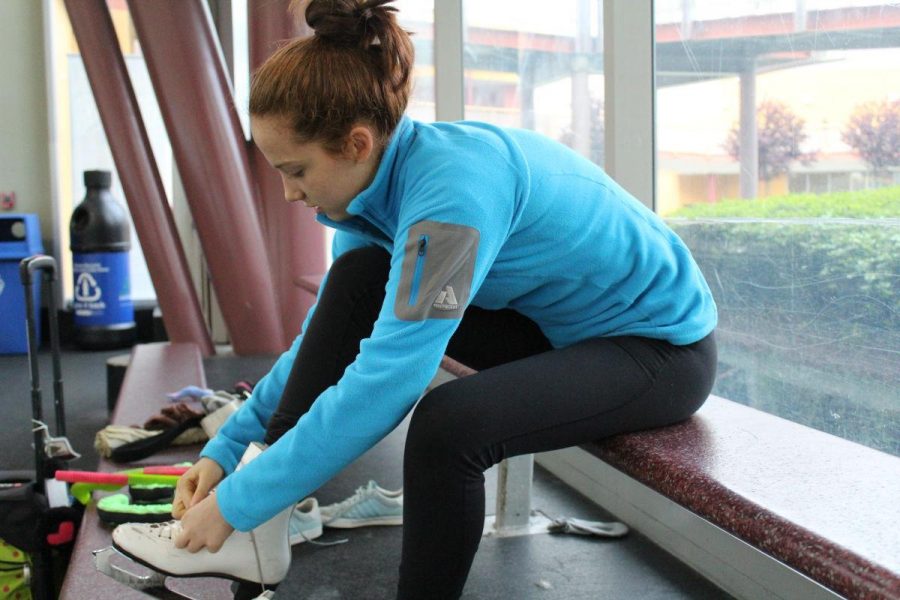 The early morning light shines through the orange bars of the Golden Gate Bridge as sophomore Loren Greene and her father share the road with other early commuters at 5:30 a.m.

Wearing her usual athletic leggings and fleece jacket to cover a long-sleeve shirt, Greene sits hunched in the car, trying to cram in her final pages of homework. Once Greene reaches the Yerba Buena Center in San Francisco, she grabs her skates and runs inside to begin her day with the activity she loves most: ice skating.

Seven years ago, Greene fell in love with ice skating after accompanying a friend to a lesson.

“It’s different than running and other sports because it has such fluid motions,” Greene said.

Greene began her skating career on a synchronized skating team. It was not until three years ago that she committed to individual competition at Yerba Buena.

Currently Greene is at the intermediate level, which entails performing double jumps and learning triple jumps.

Most days, Greene has to rush out of practice at 7:20 a.m. to try to make it to first period on time, yet is frequently tardy.

After an already long day, Greene returns straight home to finish her homework and studying, knowing that the next morning consists of an early wake-up and high expectations in practice.

Greene said that she has tried ice skating after school, but finds that it leaves no time for homework due to the increased amount of afternoon traffic crossing the bridge. Additionally, there are fewer people skating at the rink in the early morning, which makes it easier to have one-on-one time with her coach, according to Greene.

“I think it’s very cool that she is so invested in ice skating and that she has the motivation to wake up at four in the morning and actually go and do that kind of exercise,” said Olivia Carol, a friend of Greene.

Although other sports also interested her at a young age, the independence of ice-skaters drew her in. According to Greene, when you’re playing on a team, a mistake by one teammate affects the rest of the players, and she likes to be in control of her whole performance.

Despite Greene’s experience, ice skating still continues to pose challenges. If an ice skater learns a skill one day, it’s very likely that they won’t be able to perfect that skill for a couple of weeks.

“You have to keep doing it and doing it,” Greene said. “It’s what drives you, but it’s also the most annoying part.”

However, when Greene is skating across the ice her mind is clear and a sense of freedom overcomes her.

“When you’re going into a jump and you do it well, you feel super light and almost invincible,” Greene said.

Since she is now able to compete at a higher level, Greene spends most of her time perfecting new moves for her routine, which she will perform at competitions taking place over the summer.

“The routines are equivalent to a dance, but on the ice,” Greene said.

Most of the girls she skates with are close to her age and of similar skill levels. Many of them started skating around the same time, so the skaters have progressed together throughout the years.

Despite training with these girls and forming bonds with them, Greene must compete against them and other girls at competitions.

She is confident that continuing the sport will be an exciting experience after hearing from friends that have pursued a similar path.

“A couple of skaters that have already gone to college really love it,” Greene said. “They say it’s different because you’re competing individually, but you have a whole team there with you.”

Greene states that the support teammates give each other during competitions seems like a nice thing to be able to have.