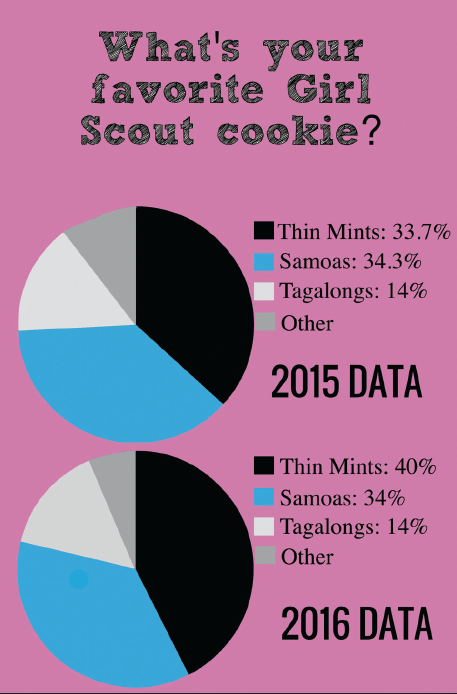 In recent months, Girl Scouts of Marin began selling their famous cookies once again. The baking and selling of these delectable treats has been going on for nearly 100 years.

These American classics have found themselves a place in the hearts of Redwood students.

The Bark conducted a survey asking students which Girl Scout Cookie was their favorite. The survey showed that Thin Mints and Samoas are Redwood’s two favorites.

“Thin mints are probably the most popular, then Samoas, then Tag-a-longs,” said Girl Scout Makenna Fergueson. Fergueson’s prediction was identical to Redwood’s results.

According to the Bark survey, 40 percent of Redwood students’ favorite Girl Scout Cookie is Thin Mints. Samoas come next with 35 percent of the vote and finally Tag-a longs with 13 percent.

This data varies from 2015, by Samoas being the favored cookie by .6 percent, followed by Thin Mints then Tagalongs. Many students tend to rave about their love for Thin Mints.

“Thin mints are my favorite,” said freshman Mary Tarantino. “I remember one time I cried when someone ate my box of Thin Mints.”

“Thin Mints would have to be my favorite because when they’re cold, like from the freezer, they just taste great. I first started eating them in third grade,” sophomore Tyler Cullen said.

Although Thin Mints seem to be the most craved variety when it comes to Girl Scout Cookies, some consumers still prefer the other varieties of flavors that the company offers.

Sophomore Brooke Christman said, “My favorite would have to be Tag-a-Longs. I like the combination of the peanut butter with the rest of it. I’ve been eating them

Girl Scout Cookies are not only famous for their addicting taste. For some, they bring back sentimental feelings from childhood.

“They kind of make me think of just being young and carefree,” Christman said as she bit into a Thin Mint during lunch.

The cookies remind him of family gatherings as they were often included as a casual snack on his family vacations.

According to Fergueson, cookie sales didn’t seem to thrive as much this year compared to past years.

“I didn’t sell as many this year,” Fergueson said. “I think it might be because people are trying to eat healthier.”

Whether it’s because of their brand or simply due to their flavor, Girl Scouts Cookies are one of those traditional snacks which never fail to leave us wanting more.