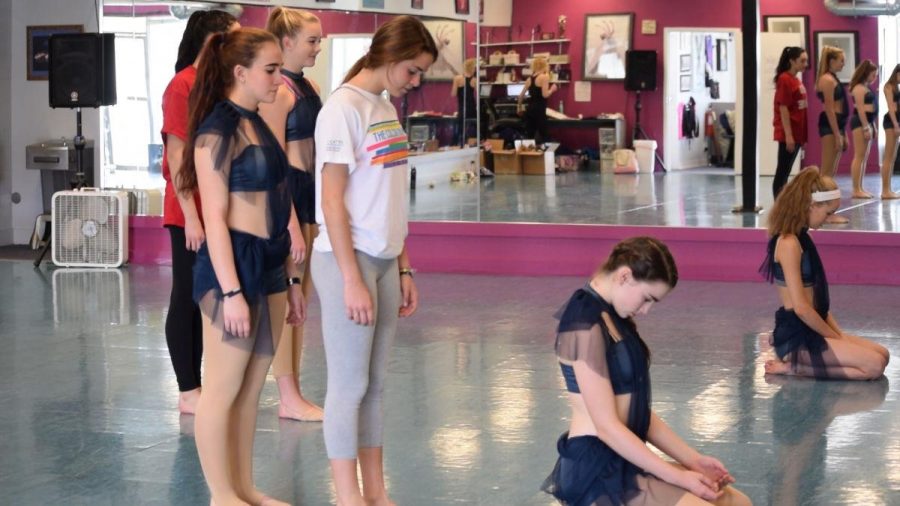 It’s Saturday morning, and the soft morning light shines through the side windows of the studio as the dancers slide gracefully across the floor. Competition dance teams have been preparing and perfecting their dances to show off to judges since September.

With regional dance competitions just around the corner, competitive dance teams around Marin are rehearsing and making last-minute adjustments to their routines before they compete.

The dancers will perform their routines in front of judges, along with teams from other studios around the Bay Area. Some soloists will get the chance to perform at Nationals if their score is high enough.

Competition season is in March and April, and the first competition occurred on the weekend of March 4.

Hemphill has been dancing for eight years, and this is her third year doing competition dance, which requires more effort, dedication, and time.

“[Competitive dance] is more work because not only is there pressure to do well for yourself, but you also have these teammates depending on you to do your very best,” Hemphill said. “But it’s generally a positive environment.”

Cramer, who has been dancing ever since she was two and is currently on her fifth year of competitive dance, believes that solos, rather than team dances, offer the chance to save the dance in spite of messing up.

“It’s pretty nerve-racking for solos because you don’t want to mess up,” Cramer said.  “But if you do mess up you can always do improv because no one exactly knows how your solo goes.”

Botas, who has been dancing since she was four and is also on her fifth year of competition, believes that being on a competitive team has added stress.

“In competition, there’s a lot more pressure to do well and when you’re actually practicing the dances they make you perfect it and the teachers are a lot harder on you,” Botas said.

Cramer agrees with Botas that there’s added pressure to be committed.

“[Regular dance classes] are not as hardworking because everyone is dancing and sometimes you won’t be in all of the dance,” Cramer said. “But in competition dance you’re in the whole entire dance, and you’re working your butt off. You really need to be committed.”

Before any race or performance, athletes have to overcome their nerves. To cope with the nerves, Hemphill’s team does breathing exercises together, and has recently been literally “shaking out” the extra energy and nerves before they perform.

“It’s definitely more nerve-racking backstage and in the wings, but once you actually get on stage it’s just the same piece that you’ve been rehearsing over and over so it’s muscle memory,” Hemphill said.

Hemphill also believes in having a strong positive mindset before stepping onto the stage.

“I try to think, ‘No matter what, this is really only going to affect me. So I should go out and do my best. Of course if I mess up it’s not going to be the end of the world. No one is going to remember this,’” Hemphill said.

For Cramer, after stepping on the stage, all the nerves disappear and are replaced with exhilaration.

“When you’re on stage, nothing really matters anymore. Personally I forget about everything that’s been bothering me and just have a really great time. And to really focus on having fun and doing my best,” Cramer said. “After you get off stage all the exhilaration just comes back to you.”

Jenna Jones, assistant director and dance teacher at Just Dance Academy, says that while the dancers practice for about six months to get their routines as clean and flawless as possible for the judges, Jones and the other competition teachers encourage the dancers not to focus on winning an award.

Jones believes that stage presence and the ability to captivate the audience are the most important factors of competition dance.

“Now that I’m in the audience watching, it’s more important that the girls are just killing it with the stage presence more than anything else,” Jones said.

Botas is a member of two advanced competition teams, and is accustomed to the process of practicing leading up the competition season.

“Especially when it’s coming up to competition, we just run the dance a lot and then we get a lot of corrections. We sit down at the end, usually before the competitions, and [the dance teacher] just gives us individual corrections to work on,” Botas said.

While performing well and receiving a decent score are desirable goals, the teams focuses on trying their best, according to Jones. Hemphill emphasizes that it’s not the end of the world if a mistake is made.

“Every year there’s always a person who doesn’t get the score they wished that they did, but even if you don’t get what you want, you’re still getting that performance experience,” Jones said.

Hemphill and Botas both believe that the enjoyment of dancing and being part of a team outweigh any unfavorable aspects of competition dance.

“Personally, I really want to be a performer as a career. So not only is [competing] a good experience for auditions, but it’s also a fun experience with friends. Going and traveling and competing, it’s just one big bonding experience,” Hemphill said.

Botas also does competition for the excitement and the contrast from other sports.

“I do competition for the thrill, it’s really fun. It’s different because you’re competing and people are watching it and judging it,” Botas said.

According to Jones, to make a competitive dance team at Just Dance Academy, one must have background of jazz and ballet and must be currently taking both a jazz and ballet class.