Focus on the issues, not insults 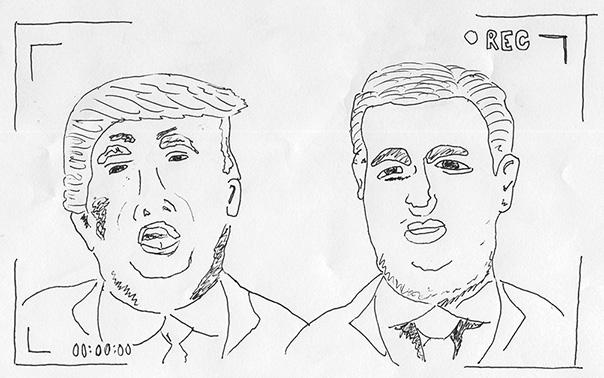 "Up next on the Real Housewives of Washington D.C...

Since January, presidential candidates have received an extreme amount of media coverage, most of which has to do with the insults candidates have been slinging at each other. The sheer audacity and number of these insults have made this election season feel more like a raucous sitcom than a presidential race. The American people are much more focused on immature defamations instead of the things that actually matter, like the candidates’ differing proposals for foreign and economic policy.

With the election process heating up, the presidential debates are becoming more and more important, causing a larger number of people to tune in. According to CBS, the most-viewed primary debate of 2016 so far had almost 17 million viewers. However, the most-viewed primary debate in 2012 only had about 7 million, according to TVNewser. This 240 percent increase in viewership seems to be occurring because people are watching for entertainment, not because they are politically engaged.

While concerns have been raised regarding many aspects of this year’s race for the White House, the most prevailing problem with this election is how rudely candidates have treated each other, especially during debates. Rather than using debates as a platform to present their individual opinions and policies, candidates have used them as opportunities to bash one another.

Republican candidate Marco Rubio recently made a derogatory comment regarding the size of front-runner Donald Trump’s hands, prompting an inappropriate moment during the Fox debate where Trump defended not only the size of his hands, but the size of another body part.

Rubio also took a jab at Trump in a different debate by saying, “If he hadn’t inherited $200 million, you know where Donald Trump would be right now? Selling watches in Manhattan.”

Presidential candidates should start acting like responsible adults, not like squabbling school children. If candidates can’t take the race seriously, how can we expect them to take the presidency seriously?

Others have noticed the particular harshness of this year’s race, as shown by videos like CNN’s “20 insults from the CNN debate in 1 minute.” In the video, Donald Trump, Marco Rubio and Ted Cruz all bombard each other with insults, very few of which actually pertain to political disagreements.

It is not just one party that has this issue, as both sides have been incredibly keen to use insulting language. During the Democratic debate on Feb. 4, Hillary Clinton accused Bernie Sanders of running a smear campaign regarding donations she allegedly received from Wall Street. Sanders has also had moments of inappropriate rudeness, including what some deemed to be condescending eye-rolling and hand gestures while Clinton was talking.

By definition, debates are meant to provoke discussions, but that does not mean they should turn into verbal cage-fights. Candidates should be focusing on building themselves up as candidates, not on tearing down their opponents.

However, in the recent debate on March 10, Republican candidates managed to remain civil and abstained from flinging insults at one another. This debate will hopefully set the tone for the future and help Americans remember what political debates are supposed to look like: people debating important issues in order to gain support.

Presidential candidates should be held to the highest of standards and should represent the most qualified and brightest politicians from both parties. If the next president of the United States is elected based on entertainment value, we de-emphasize the importance of politics and the presidency.

Americans are distracted from the real issues when debates feel more like reality TV shows rather than platforms for candidates to share their of policies. The youth is being introduced to a new breed of politics that focuses on ridicule, not the realities of our country.

If this trend of offensive politics continues, our generation could start believing that the presidential race should include cheap insults and entertaining sound bites. The current state of media and the attention we give to candidates only act to encourage the style of this offensive election cycle.

To solve this problem, Americans should ignore the candidates who refuse to act maturely, not reward them for their childishness with a tremendous amount of attention.

Americans need to start supporting qualified and intelligent candidates who hold themselves to the high standards that running for president demands. Additionally, the public must look beyond the enticing clickbait that is thrust upon them and instead look towards the men and women who are prepared and capable of running this country.