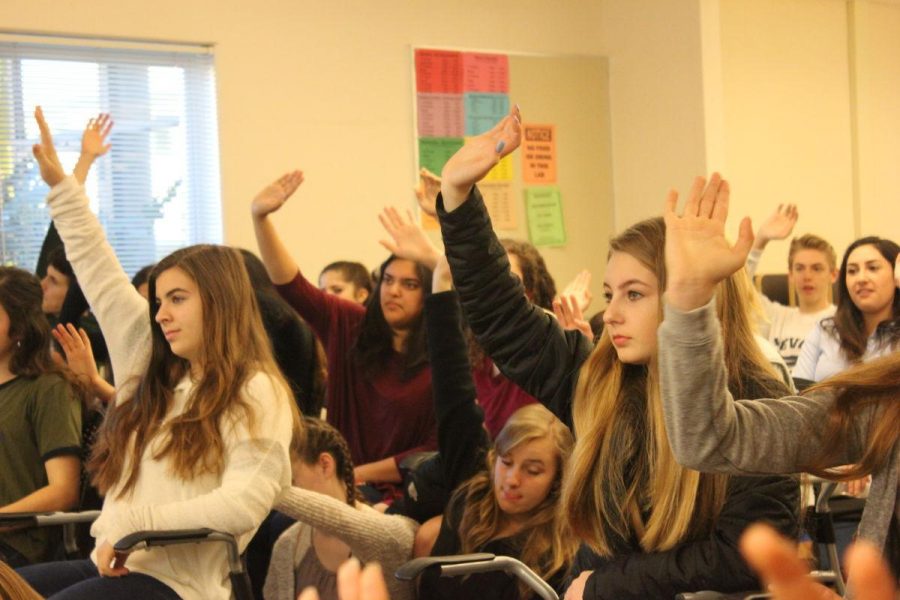 Students vote during an ASB meeting.

The Associated Student Body (ASB) found out this year that it can no longer give funding to individuals or unassociated students groups. It can now only provide money to official clubs registered with ASB.

This year, ASB was notified by the administration that the Scholarship Fund violated California Education Code, and that under the current Ed Code rules, ASB could not longer give money to individuals for fear that the money wasn’t being used properly.

ASB was also required to change the name of the fund to the Club Assistance Fund.

“The way that the Club Assistance Fund works now is basically we have an ASB operations fund, which consists of our income from all of our events that create money,” said ASB President Adelaide Shunk. “From ASB operations we set aside $3000 every semester and we use that money as an avenue for clubs to start events, host meetings, and go to conferences.”

The process for requesting money from ASB has remained relatively unchanged, according to Shunk, although it is limited to approved clubs.

“If you would like to get money from the Club Assistance Fund, you have to go to Room 107, fill out a sheet that says what your club is, why you need the money, what the event is, and how much money you need,” Shunk said. “Then you come back on Thursday morning at 7:30 a.m. and you come into Leadership and you explain what you’re doing.”

Shunk said that although the presentation isn’t formal and students don’t need to prepare long speeches, students in Leadership often ask many questions because they want to ensure that they are giving funds to clubs who will use it wisely.

“I’d read off your sheet in our meeting, and then the Leadership class asks questions like ‘We only have $3000 so why should we give you $1000?’ From there, we have the club step outside and we discuss it as a Leadership class, and then we vote,” Shunk said.

Even though the change in process means that fewer people can request money, Shunk said that there are still too many clubs requesting money for everyone to get funding.

“Most of the time we’ll give a smaller amount than [the clubs] ask for, just because we don’t want to give $1000 to the first three clubs in the first month and then have someone come in November and [Leaderships] says ‘That’s a way better idea than the one in September,’ and not be able to give them money,” Shunk said. “It’s kind of difficult, and clubs can get really frustrated with us, but the main goal is just to help support clubs so that they can run activities, run fundraisers, and get jump started.”

Junior Caroline Noble found the process of requesting funding for her club, Body Positive, to be smooth and easy when she needed $2000 for a training.

“The founder [of Body Positive] Elizabeth Scott said that I should start a club, and that they were hosting a training for high schools who wanted to attend. It was a two-day 15-hour intensive training that cost $2000 to send seven people to. So I was like, ‘How am I going to get $2000?’” Noble said.

At the suggestion of her club advisors Erin Schneider and Stephen Hart, Noble presented to the Leadership class and was granted $1000 for her training.

“Obviously [Leadership has] money to give and it was really generous and it helped us a lot,” Noble said. “The training changed everything.”

Noble received an additional $1000 from the PTSA, but other than that did not do any fundraising before going to Leadership.

Not everyone agrees that the ASB funding allocation process is working smoothly.

Senior Nate Orwig was denied $300 when he was asked for money so that the Environmental Action Club could buy transformers to decrease energy use at Redwood by automatically shutting down electronics at night.

Orwig said he was told that his club should have explored other fundraising options first before going to ASB for money.

Shunk said it is very important that clubs try to obtain money from other sources before requesting funds from Leadership.

“What Leadership wants to see is that you’ve exhausted other avenues before you come to us,” Shunk said. “You’ve had fundraisers, you’ve done a GoFundMe campaign or you did three bake sales last year, because as a Leadership class we do that a lot for our activities and so we understand that it’s not always easy to get a ton of money at first. Showing that you at least tried makes it a lot easier for us to justify giving you more money.”

“One of the main issues we run into is clubs that become dependent on the club assistance fund because then out of our $3000, $500 of it is going away every single time because they’re always asking us for money, versus if we could give a club $500 to help jumpstart this event, and then they can start fundraising,” Shunk said. “It’s a lot easier to [jumpstart clubs] than every year giving out the same amount.”

To get reimbursed, club members must bring their receipts to ASB.

“They can only use [the money] for things that we’ve approved, and so there’s never really a concern of [clubs] using this money in an inappropriate way, which is a really good thing,” Shunk said.