Til It Happens to You: Sexual Assault at Redwood and Beyond 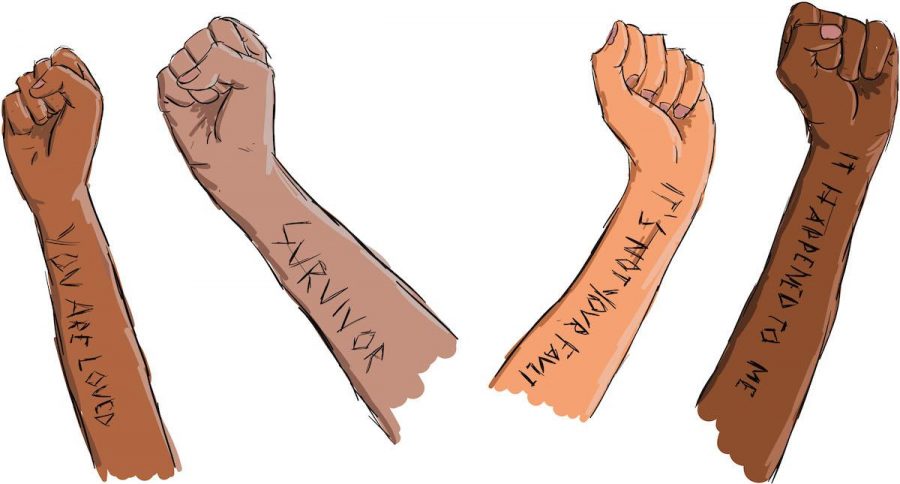 Til It Happens to You: Sexual Assault at Redwood and Beyond
By: Jenna Herz

“I woke up and he was on top of me,” said “Sadie,” a senior girl who wished to remain anonymous to protect her privacy. “He was having sex with me.”

According to a February Bark survey, 12 percent of Redwood students, 19 percent of seniors and 14 percent of females have also been involved in non-consensual sexual encounters.

Sadie’s night started with a consensual encounter with a friend of hers. Then, she fell asleep.

“I was asleep and he was not wearing a condom,” she said. “For two weeks I sort of just tried to forget about it and tried to understand what it was that happened.”

After suppressing her story for weeks, Sadie broke down in front of one of her teachers, who reported it to the police as required by federal law.

“If someone has harmed another student we have both an ethical and legal duty to report that to the necessary people,” said school counselor Lynne Kennedy. “If the student hasn’t reported it to the police, we explain the process and get them connected to the police. The great thing about having a school resource officer is that we have someone here who really understands teenagers and can demystify what can be very scary.”

Redwood’s resource officer is Detective Scott McKenna, who is now in his second year on the job. After an incident is reported to the police, victim protection is the first priority, according to McKenna.

“The first step is to get a support system set up around the victim so that when we do start talking they don’t feel overwhelmed or scared,” McKenna said.

Setting up a support system involves informing parents about the incident if they don’t already know, according to McKenna.

“I wasn’t the one to tell my parents. The police were,” Sadie said. “I avoided them for a while. I was so scared. But my parents ended up being the most supportive people. I’m so lucky. I know they would do anything for me.”

Sadie developed several methods of coping after her assault.

“Everyday I wrote in a journal. I had this one journal dedicated to healing. For over a month I would write in it every day,” Sadie said.

Aside from writing in a journal, Sadie turned to other methods of getting her anger out.

“Throughout the night he had choked me and scratched me and so I began cutting a lot all over my arms and body,” Sadie said. “I did it because I needed to feel my body again.”

Sadie eventually mustered the courage to tell her wellness counselor about her self-harm, and her counselor suggested healthier ways to cope.

“Before I would take a shower I would take a pen and write terrible things all over my body and cuts and then wash them off. That really helped. I would also take pictures of it just to document it. I think that was probably the most powerful thing,” Sadie said.

Sadie’s case is currently being investigated, but Sadie said that not a day goes by when she doesn’t think about her assault.

“Sometimes I would wake up at the exact same time it happened in the middle of the night and feel him on me,” Sadie said. “I’d have to pound on my bed to get it to stop and remind myself that I was OK.”

It is still extremely difficult for Sadie to see her assailant at school.

“I see this person everyday in several of my classes,” she said. “It was very difficult to sit through my classes. I would leave class at least once a day and just escape to either the office or the Wellness Center.”

Sadie said she experienced constant pain and anxiety from seeing her assailant at school in addition to night terrors.

“I couldn’t let people touch me for a long time because my body was always stimulated. It was always in pain,” Sadie said. “It would start in my chest and my chest was always hurting and then it would spread through my limbs. I felt like I was on edge all the time.”

It is not uncommon for people to be sexually assaulted by close friends or people they know. According to data from a 2009-2013 study by the U.S. Department of Justice, 82 percent of sexual assaults are perpetrated by non-strangers.

Anonymous senior Abby is also a victim of sexual assault by a non-stranger.

“It was last May, a couple weeks before school ended, and I went over to a friend’s house for a party,” Abby said. “I got really drunk and high and I felt sick. This one guy told me he would take care of me and help me and I believed him because he was my friend.”

Abby later passed out on a bed in a room that her “friend” had brought her to. When she woke, she felt his hands down her pants.

“He wouldn’t stop and I tried to push him off. I rolled over to push him off of me but he took that as an [invitation]. He started really roughly kissing me and took off my pants and everything and then he raped me,” Abby said.

Thirty-seven percent of Redwood students know someone who has been involved in a sexual encounter to which they did not consent, according to the Bark survey.

Like Sadie, it took Abby several weeks to talk to anyone about what had happened, and once she did, she felt the need to reach out to more than one source of support.

“It got to a point where I felt like I was going to die without telling someone else so I told someone else. Unfortunately, they didn’t believe me at all,” Abby said, adding that the person later told her parents.

“[My parents] just kept asking me why I didn’t tell them. It was because I wasn’t ready to tell them. It was one of those things that was too personal and too recent,” Abby said. “It hurt more that they didn’t hear it from me.”

Although Abby’s parents were initially scared, they eventually became a strong support system for her.

“My parents told me I should talk to police, but they didn’t pressure me to,” Abby said. “They did, however, make me go to a rape crisis center and see counselors.”

Counselors at all rape crisis centers are required to report incidences of assault; however, Abby has not personally talked to the police about her assault.

Abby believes she might press charges when she gets to a strong enough place in her life, but right now she still doesn’t feel ready. For now, she is focusing on the support she draws from her friends and family.

“Your friends are a huge support system, same with your family. Use the people around you and make sure that you surround yourself with people that you know will be there for you no matter what, especially after this kind of situation,” Abby said. “The way people react when you tell them [you’ve been assaulted] says a lot about their character. If they react poorly to this then you shouldn’t have them in your life.”

Detective McKenna believes that sexual assault is prevalent among young students nowadays because of sexualization of women in the media.

“You’re bombarded by sexual images and adult imagery at such a young age now because it’s all over TV,” McKenna said. “Even the way fashions are now, fashions are far more revealing and far more adult-based, but kids are all wearing it.”

McKenna said the best way to avoid potentially harmful situations is to be cognizant and hyper-vigilant, especially when drugs and alcohol are involved.

“Protect your friends. Protect yourselves. Don’t ingest things if you don’t know what they are,” McKenna said. “Kids need to feel empowered. It’s your body whether you’re a girl or a guy. It’s your body and your decision. If you, at any point, don’t feel comfortable with something it’s okay to say stop. And that’s it, it’s game over.”

Increasing education about sexual assault is the next step to preventing it, according to Kennedy.

“There’s nothing systematic we do to educate students on sexual assault,” Kennedy said. “However, there’s been more discussion this year on raising awareness and educating our teens on how to be safe.”

McKenna hopes that the Wellness Center will play a big part in both preventing sexual assaults as well as helping survivors.