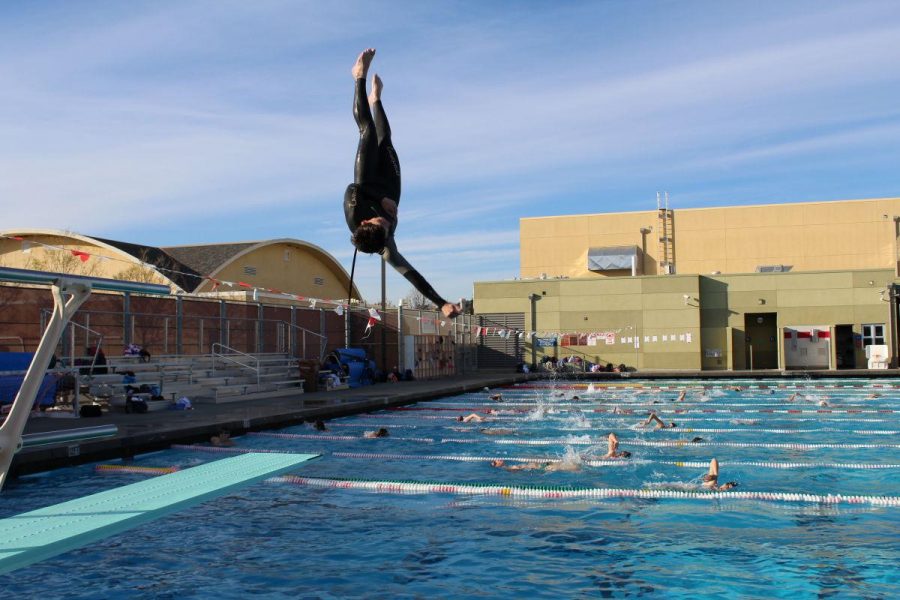 https://vimeo.com/156633154“[Being in the air] is weightless. It feels like those types of plane rides where they go up a thousand feet and then drop so there is no gravity on you,” junior Vanessa Graf said.

Graf is captain of the dive team. In past years, she was the only diver, but seven other divers will be competing on the team this year, including senior Kyle Wong, one of the first male divers in three years. The divers earn points that are added into the swim meet total score, sometimes making or breaking the meet.

The lack of male divers put the boys’ swim team at a disadvantage, according to Wong.

“Last year was the worst because we would start the meet out 20 points under because we didn’t have any guys diving,” Wong said.

Because of this disadvantage, Wong felt it was only necessary that he filled the missing hole.

“Once the season ended and I was talking with my friends about what we were going to do next year, they all said they were just going to do swimming,” Wong said. “When I asked who was

going to do diving, they said they didn’t know. So I figured that someone has to represent our gender.”

Wong and Graf both believe that the lack of males on the team is due to the misconceptions of what is physically involved in diving.

“Most people think that only females can do flips and can be flexible and don’t realize that guys can go higher and do more flips,” Graf said. “They only base diving on the flexibility portion,

not on the strength as well.”

In addition to Wong, junior Jenna Kieffer joined the diving team. Kieffer originally became part of the team due to the lower expectations diving allows.

“I swam freshman and sophomore year and I liked swimming a lot, but I didn’t know if I could fully commit to the sport because I know Fred [the coach] has really high expectations of all the swimmers,” Kieffer said. “I feel like diving is a compromise of expectations because you obviously have to show up at practice everyday, but it is nice knowing that I will be new to the sport so the expectations won’t be so high.”

“I’ve been watching a lot of videos to watch the approach and get used to the idea of throwing yourself off a piece of plastic,” Kieffer said.

Wong has been trying to improve his flexibility outside of practice.

“It is crucial that when you do the pike position, you actually touch your toes. You actually want to look good when you dive, so flexibility is key,” Wong said. “All I could really do was basic stretching and watching videos. Watching YouTube makes me want to do it myself.”

All three believe that the sudden increase in divers is due to publicity.

“I would say it is all because of word of mouth,” Kieffer said. “A lot of people know how well Vanessa [Graf] has been competing because there are a lot less divers in the league than

swimmers so she really stands out and shines. I think it is true that one girl inspires others.”

Diving coach Jeff Miller has little idea of why the diving team has increased in popularity.

“There was always some kind of recruiting effort but it never seemed to materialize or generate any new people on the team,” Miller said.

Graf believes that the larger freshman class has created more interest in the sport. Two freshmen, Eva Geitheim and Sam Jackson, will be competing on the team this year.

Techniques used in diving are very similar to those used in gymnastics, and Graf began her career as a diver after participating in gymnastics.

“I did gymnastics when I was smaller and then I did tumbling and then trampolining in eighth grade and freshman year,” Graf said. “I like to do flips and gain those little adrenaline rushes which diving allows [you] to do.”

The scoring for diving is very similar to that of a gymnastics meet, according to Graf.

“The diver has to do six dives in a meet and all the dives are all scored on a scale of one to ten. The more difficult a certain dive is, the more points the dive will score,” Graf said. “At the end after you do all six dives, your scores are added up and the person with the highest cumulative score will win.”

Miller has already seen all eight of the divers, new and old, improve and begin performing more advanced dives.

“It is a short season and I had to get them up to speed pretty quickly, but fortunately all of these guys are fairly talented and now two weeks in, we have divers, not novices,” Miller said.

Miller credits the team’s quick improvement to the ability the divers have to watch each other’s techniques, especially Graf’s.

“It is really helpful for the new divers to see people like Vanessa [Graf] who have experience because they can see it done correctly,” Miller said.