A Moral Realignment for Solitary Confinement 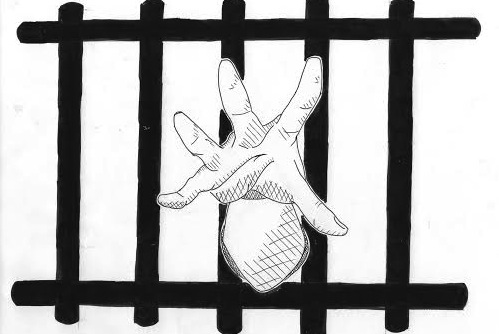 On Jan. 25, President Barack Obama released an op-ed in the Washington Post and made statements that he was taking executive initiative to ban solitary confinement for juveniles, as well as place more restrictions and regulations on ways solitary confinement is implemented in general.

This is a good start, but we need to ban solitary confinement for everybody. A person in solitary confinement normally spends 22 to 24 hours a day in a small, closed off cell. They are given a toilet, a sink and a bed, and sometimes get a single hour in the whole day to exercise. They are prohibited from engaging in any social interactions and are often exposed to continuous artificial light, which can disrupt the body’s natural sleep and energy patterns. Nobody, no matter their age, mental state or behavioral actions should be subjected to the torture of solitary confinement.

Sixteen-year-old Kalief Browder was arrested for a robbery that he insisted he did not commit. He spent more than two years on Rikers Island, New York’s main jail complex, awaiting a trial that never came. During his stay, Browder suffered two years in solitary confinement accompanied by physical and mental abuse. As Browder’s mental state deteriorated, he lost hope and made six attempts to end his own life. In 2015, just two years after his release Browder hung himself at the age of 22.

People in solitary confinement often develop severe psychotic and behavioral disorders. A study done by the National Criminal Justice Reference Service found that more than 50 percent of youth who have experienced solitary confinement develop co-occurring mental health and substance abuse disorders. Prisoners in solitary confinement often exhibit signs of intense anxiety, depression and paranoia. Stuart Grassian, a board-certified psychiatrist and former faculty member at Harvard University, said that inmates were “actively psychotic and/or acutely suicidal.” Obsessive behaviors are also common. In an article for PBS Frontline, Grassian described one prisoner who developed an obsession with feeling that his bladder was completely empty and would spend days trying to urinate.

One inmate, who went by the pseudonym “Kyle B,” said, “Being in isolation to me felt like I was on an island all alone, dying a slow death from the inside out.”

Subjecting people to long periods of contained social isolation is severely detrimental to their mental health. The effects of solitary confinement can follow a person long after their imprisonment, as was seen with Kalief Browder. A study of the California prison system from 1999 to 2004 saw that nearly half of the suicides committed in prisons were by inmates in solitary confinement.

Some may say that solitary confinement is necessary to control rowdy prisoners, or to control and protect prisoners who are likely to try to hurt themselves. While it is important to keep the peace in a prison environment and to protect the inmates from themselves, solitary confinement is not the answer. The mental disintegration that takes place within the four walls of an isolated cell has the ability to permanently and detrimentally affect an inmate’s mental health and can worsen pre-existing psychological disorders.

Jail should be for rehabilitation, not punishment. Although it is important that people learn that their actions have consequences and that they can’t get away with breaking the law, it should be possible for them to reenter society as productive and reformed individuals. Solitary confinement can damage a person to the extent where they are unable to rejoin society. Their mental state becomes so unstable that they cannot get a job and create a new future for themselves. A researcher at the RAND (Research and Development) Corporation, Lois Davis, said that prisoners who participate in any educational correctional program drop their chance of being reincarcerated by 13 percent. In solitary confinement, prisoners have no access to these educational opportunities, making them more likely to be reincarcerated.

Solitary confinement is as financially debilitating as it is mentally harmful. Data from the Legislative Analyst’s Office (the California Legislature’s Nonpartisan Fiscal and Policy Advisor) says that it takes about $20,000 to incarcerate an average inmate. A national estimate has found that it costs $75,000 to house one person in solitary for a year. This is more than three times the cost of an average prisoner. The money going into isolating prisoners in solitary confinement could be rerouted towards providing reformative measures for the inmates. This funding could be used for making more courses available that could let prisoners get their GED or learn to manage their finances so they don’t turn back to crime, and providing prison counselors and job consultants for inmates who will soon be released.