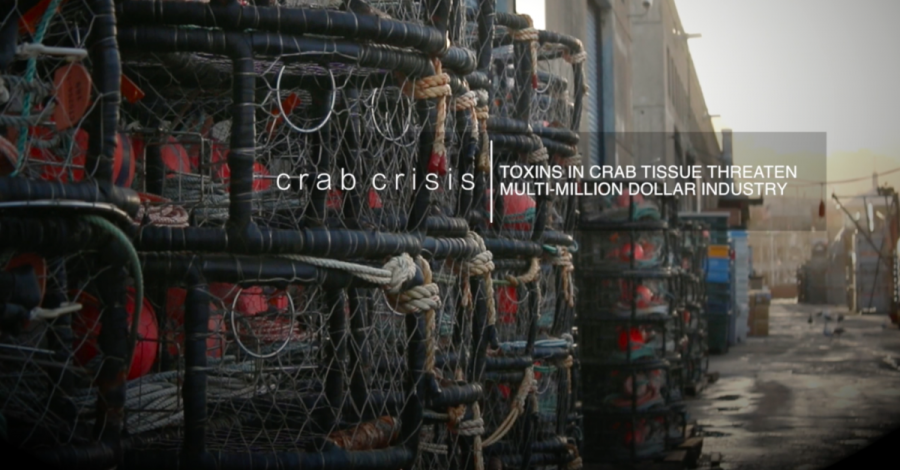 By: Pearl Zhong and Anne Pritikin

As the morning sun looms over the waves lapping against the dock, it illuminates faded neon crab traps that line the outside of the sheds at Fisherman’s Wharf, a pitiful reminder of the absence of local, fresh-caught crabs.

Fishermen like Larry Collins, President of the San Francisco Community Fishing Association, have not made any profits from crab this season, even though crabs contribute to about two-thirds of his company’s income. https://vimeo.com/153720387

“There is no business. Last year, we probably unloaded half a million pounds of crab. This year, we haven’t unloaded one,” Collins said.

Collins has been in the fishing industry for 35 years and has never seen a situation as desperate as California’s current crab season closure. Fishermen have stopped releasing crab traps ever since local crabs failed to pass the seafood regulations after the neurotoxin, domoic acid, was found in their tissue.

The California Department of Health measures the harvested organisms biweekly to test their levels of toxicity. To be deemed safe, the organisms have to be free of toxins for two consecutive weeks.

Produced by the harmful Pseudo-nitzschia algal bloom, domoic acid has been found in high concentrations in Bay Area crabs and in other areas along the Pacific coast. Domoic acid is an analog of glutamic acid, an amino acid essential to the function of the brain’s nerve cell transmission, according to Vera Trainer, an oceanographer and toxicologist at the Northwest Fisheries Science Center who studies harmful algal blooms.

“In humans, what is affected mostly [by domoic acid] is our hippocampus, which is where memory and learning take place. In extreme cases of high toxin exposure, permanent short term memory loss can result, and therefore the syndrome in humans is called anemic shellfish poisoning,” Trainer said. 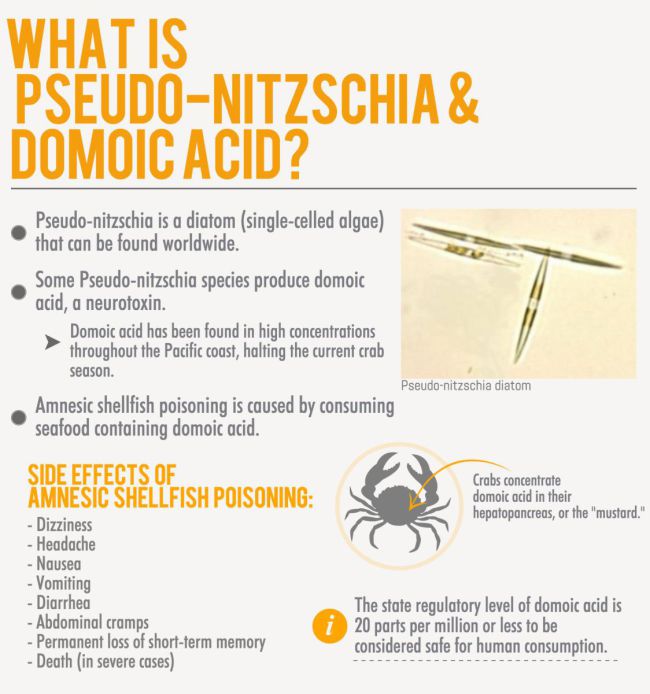 Trainer cited a 1987 case in Prince Edward Island, Canada, where over 100 people fell ill from mussels that were contaminated by domoic acid. Three people died, several people suffered short-term memory loss, and many more were sickened.

At lower levels, the toxin causes gastrointestinal symptoms like nausea, vomiting, and diarrhea, according to Trainer.

The fear of consuming contaminated crabs has led to hesitant customers at Whole Foods Market, despite the crabs being imported from areas free from domoic acid, according to Seafood Associate Team Leader Mike Gehl.

“[Customers] didn’t even want to touch it. Even now, they are still a little hesitant. They come up and ask for crab and want to know where it’s from,” Gehl said.

“There’s a lot of overseas buyers, and they pay a lot more. Unfortunately this means we don’t get as much crab here,” Gehl said.

Before the holiday season, Gehl typically pre-orders up to 3000 pounds of Dungeness crab to satisfy customers during the Christmas rush. This crab season, however, he considers himself lucky have to received a mere 23 pounds.

According to William Cochlan, Senior Research Scientist at the Romberg Tiburon Center, this past algal bloom that first appeared in May of 2015 and lasted until November of 2015 was the longest lasting bloom of the Pseudo-nitzschia species reported for the Pacific Coast.  The bloom also covered the largest geographical area reported to date, from the Channel Islands off Santa Barbara, CA, to the Aleutian Islands in Alaska.

Despite common belief that El Niño directly caused the severity of the large algal bloom, there has been no published research that proves this theory, although Cochlan says it is certainly a contributing factor to the toxic algal bloom.

“Algae blooms are basically the gardens of the sea. The same conditions that promote growth in your garden…result in phytoplankton growth in the sea,” Trainer said. “In the springtime, we have upwelling, which brings water from the depth to the surface, providing nutrients that are basically scattered from the sediments to the surface of the water. When those nutrients are available and we have sunlight and warmer temperatures, algae can bloom.”

The Pseudo-nitzschia population experienced extreme growth during the fall season, but has currently decreased to regular levels in the nearshore coastal ocean area. Concentrated in the tissues of shellfish, the remaining residual toxins that traveled up the marine food chain are causing recent closures of Dungeness crab fisheries.

In 2015, the Northwest Fisheries Science Center sampled 200 stations off the California coast and discovered that 100 stations contained a dominant population of Pseudo-nitzschia. Typically, there are certain areas offshore, known as hotspots, that are home to large populations of Pseudo-nitzschia; however, this past year, almost the entire coast was dominated by the harmful algal bloom.

“[The results were] extremely unusual. It’s a bloom situation at over half of the stations offshore. We’ve measured toxins at every station north of Santa Barbara and pretty much all of California. Rather than seeing these typical hotspot sights, we had toxins pretty much everywhere by May 2015,” Trainer said.

According to Cochlan, the toxic algal bloom is essentially gone from nearshore waters, but may still remain offshore. The Northwest Fisheries Science Center recently sent out cruises to determine if there is still a prominent Pseudo-nitzschia population further offshore.

This recent toxic algal bloom has garnered so much attention because of its nearshore presence, which can be harmful to marine wildlife.

“We’ve had some very large algal blooms that are toxic up in the Pacific Northwest. That was 2006. It was a very large bloom, probably the largest at the time. But it didn’t really have any impacts on wildlife and mammals and shellfish because it was offshore, but when [algal blooms] hit shore, that’s when you get all the impacts,” Cochlan said.

The closure of the crab industry has negatively affected fishermen and local seafood businesses, according to Cochlan.

“The commercial fishery is worth anywhere from 60 to 90 million dollars a year in California alone, so it’s a really, really lucrative fishery, so all the fisherpeople were impacted, restaurants, all that stuff. Huge economic impact,” Cochlan said.

Sport fisher Todd Parson said that the closure of this season’s crab industry significantly affected fishermen and businesses, but those whose income depends upon the success of the industry were hit especially hard.