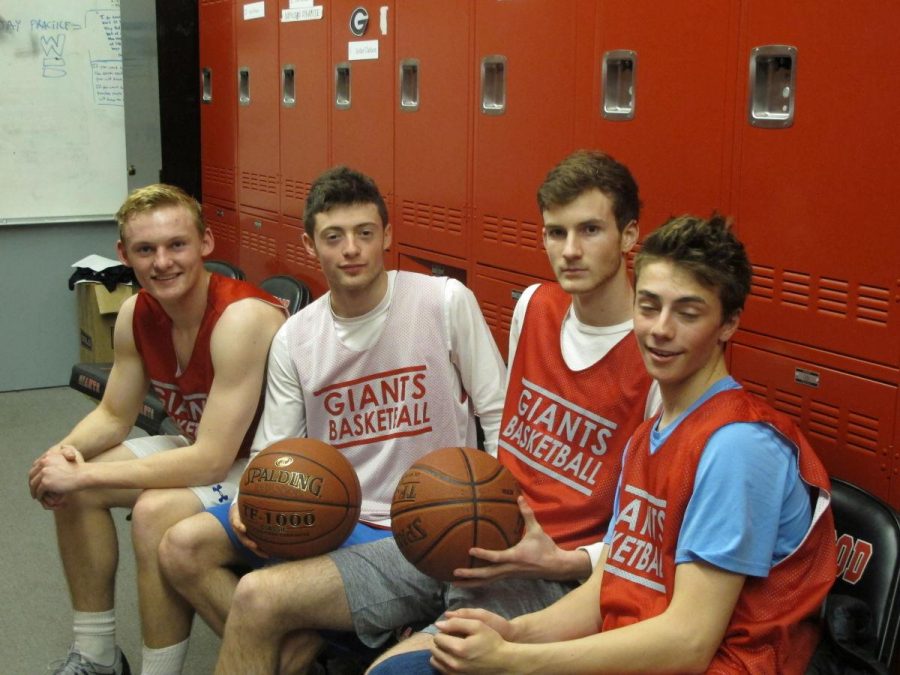 The bench is getting restless, the game clock is counting down, the parents are already celebrating, and the four boys know what they have accomplished. Not just any victory, but a championship: a sixth-grade CYO basketball championship.

Fast forward five years, and once again the four are competing for a championship, but this time there is far more at stake. Now they are at Redwood and have a true shot at a MCAL championship, something that a Redwood basketball team hasn’t done in six years.

Juniors Brendan Shepard, Matthew Walravens, Ashton Finegold, and Charlie Reis have been playing together for eight years, forming a bond and friendship on and off the court that makes the Giants a close-knit and hungry team: a potent combination for the final stretch of the season.

The bond began in the fourth grade when Shepard, Walravens and Finegold first started playing on the local Tiburon team. Two years later, Reis joined the team, and together they won three consecutive championships on their CYO and middle school teams.

At Redwood, Shepard and Reis were called up to varsity as sophomores, while Finegold and Walravens played on the JV team.

According to Finegold, it’s been exciting to be teammates again and to see how the others have grown as players.

“Playing together in practice has really been exciting for me to see,” Finegold said. “ Just seeing how Brendan and Charlie have improved so much being in a really competitive position last year and playing with veterans like Laron Bullock and William Breck and getting their experience from them—I can see how it really benefitted them.”

Though the four all have different roles, they have big plans for the remainder of the season.

“I think we definitely want to beat Drake and Marin Catholic (MC)―those are going to be really big games for us,” Reis said. “We lost to MC the other night by two points and we were shooting a little off but next time if we come out with a lot of focus and we are firing on all cylinders we should be able to beat them.”

Throughout middle school, all four were the stars of the team, part of a starting five that pestered opponents with stifling defense, efficient offensive-playmaking and mistake-free execution. At Redwood, mixed in with a deeper pool of players from other middle schools and teams, their roles have changed. Walravens and Finegold, both guards, have accepted more limited roles, coming in for brief periods to rejuvenate the offense and give starters a rest. Shepard and Reis, meanwhile, have become starters―Reis as a quick-footed big man and Shepard as a go-to defender.

While each of the four has a different role, their success during the remainder of the season will be dictated by how well each player can fulfill their purpose on a team with many talented players, but no one who can take over a game single-handedly.

“On a team where there’s one really good player or a team where you don’t know many of the people, if you’re having an off day it’s awful because there’s nobody you can go back on,” Walravens said. “That’s not the case with our team. With our team we have people that give support.”

Being comfortable and confident on the court is a necessity for any team to be successful. Anticipation, synergy, energy―all of these are components of championship-caliber basketball teams and Reis believes the Giants have the necessary ingredients.

“Having played together for so long, we just can anticipate each other and what we are doing and our movements and cuts and passes,” Reis said. “I think that just having so much experience with these guys, it really helps us play better and know what each of our strengths and weaknesses are.”

Shepard called the connection “subconscious” and Finegold added that they “know where everyone’s going to do their best.”

The Giants are going to need every possible advantage if they are going to win the MCAL championship, especially with strong competitors such as Drake, MC, and Branson. They may have gained some inspiration Jan. 12 with their last-second loss to MC, a game that frustrated but also motivated the team to improve.

Walravens believes that a win against the Wildcats would be especially important to the seniors, many of whom have never beaten MC while on varsity.

“Some players on our team who have been playing varsity for awhile have been dying to beat MC but it hasn’t happened yet,” Walravens said. “Our last game of the season this year is at MC and so it should be really exciting. We are going to work really hard to get to a point to do that.”

It is rare for teammates to stick together for as long as these four have, but the potential of what lies in front of them is not something any of them have overlooked.

“As a kid you always kind of picture yourself growing up with the friends and teammates that you are with,” Reis said. “And this year our team being pretty good and having the opportunity to possibly win the MCAL championship and be successful with our team of friends, I think it’s just a really great experience.”

While all four are keen on staying focused during the final stretch of the season, they also have reminisced about some of the strangest and most valuable memories they have from the CYO years.

There was the time they pulled up in a Hummer limo to an AAU tournament or the practice Shepard remembered, when their coach wore the jersey of their opponent’s star player in order to imitate the feel of the game.

From these memories as eager sixth-graders to becoming seasoned players both physically and mentally, all four players know that the time is now to win a championship. And all four agree that there is nobody else they would rather do it with.

“I think it’s really fun to win in general,” Reis said, “but I think it’s even more fun when you have people that you’re friends with and you hang out with a lot―that you win with them. Because then you all can reminisce and remember that moment and it really makes it all that much better.”

While they can look back on a successful CYO career, unsurprisingly, a MCAL championship would be a lot more meaningful, according to Shepard.

“When you are 40 and you tell your kids, ‘I won a CYO championship,’ it’s definitely not as impressive as ‘I won a high school basketball championship’,” Shepard said.

While the Giants may not be the favorites to take home a championship, the trophies that all four players have collected over the years as teammates and as friends speak otherwise―these Giants have the competitive desire to win and they have the relationships that were formed eight years ago and have been strengthened over time.