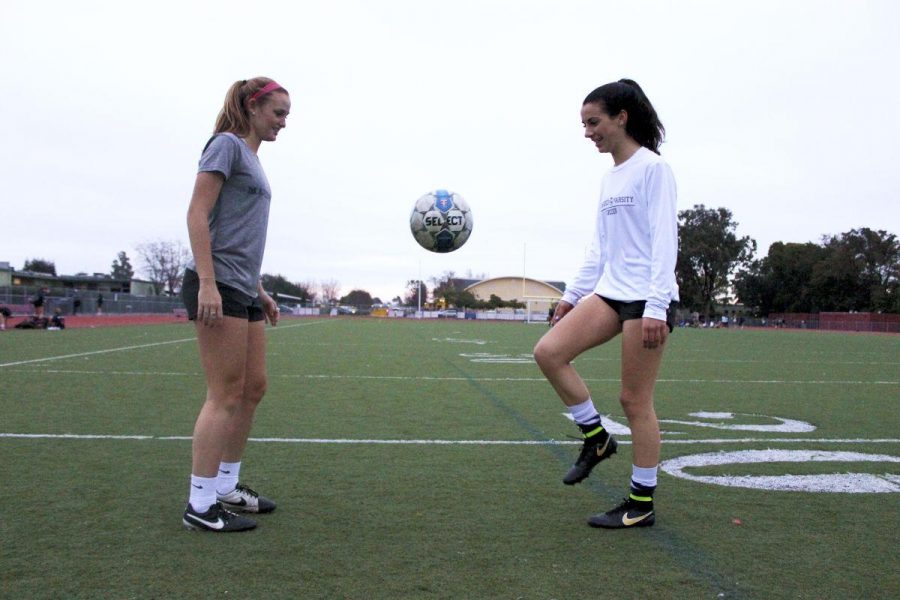 Lauren Foehr and Hannah Halford juggle the ball after their practice

Junior Lauren Foehr passes the ball down the field as sophomore Hannah Halford runs a diagonal cut and dribbles to the goal. This is a familiar play for the two varsity soccer players, who started to build a connection at the beginning of last season.

Foehr and Halford both started as freshmen on the girls’ varsity soccer team.

“We played a scrimmage against JV for the first time and we started to click,” Halford said.

While the whole soccer team has a strong bond, Foehr and Halford work especially well together due to their complementary positions and similar ways of thinking. Foehr plays attacking midfield, which is responsible for attacking, defending, and generally controlling the play, while Halford plays right in front of her at forward, the main scoring position.

Through long plane and car rides, both Foehr and Halford travel all over the country to play soccer for various programs.  Halford and Foehr both play for Marin Football Club, while Foehr also plays for the Olympic Development Program, the Cal North, Region IV and Player Development Program.

Because they have both trained with Marin FC for a long period of time, Foehr and Halford think similarly and can read the plays early on. The training throughout Marin FC has helped them develop field vision, and focus on possessing the ball to be able to combine and pass with other players. This specific training has made it second nature for Foehr and Halford to connect and read the play. When Foehr is in possession of the ball, Halford has the ability to run where Foehr wants without having to communicate making it easier for the girls to out-play the defense.

“It is important for our positions to be close because we have to be able to combine through the defense,” Foehr said. “When we start connecting our passes it helps the whole team flow.”

By knowing each other’s style of play and connecting their “one-two’s,” (a play where someone passes the ball and then passes it right back to play around a defender) it makes it easier for them to beat the defense and open up the field. Halford is technical and crafty while Foehr has an aggressive and strategic style of play.

Girls’ varsity soccer coach Mattias Kodzoman gives the duo freedom on the field to do what they believe is the best option.

“They are two players on our team that posses the most quality in terms of ability and having an understanding of the game of soccer,” Kodzoman said. “They are two key players to our girls varsity team.”

Foehr and Halford have created a special connection with each other that neither had experienced before playing for Redwood.

“We can look at each other and we will already know what we’re doing,” Halford said. “We don’t need to say anything, it just happens.”

They can almost always count on each other to be there during the play. Although many athletes have a similar connection to theirs, their bond is stronger than most due to their training with Marin FC and putting in the extra work outside of practice.

“We can read each other’s body language well, so we can anticipate what each other are going to do,” Foehr said.

Due to Halford’s starting role on varsity last season, their relationship has been able to grow and progress. It helps that they are close in age and have had multiple seasons to grow, and they will have a chance to grow their bond next year as well. Foehr and Halford can combine advanced skills with their communicative bond to create plays.

“While working together going down the field towards goal, they can go with speed and combine it with footwork which is unique to have that combination while going to goal,” said teammate junior Lily Armstrong.

Together, Foehr and Halford initiate plays that help carry the rest of the team.

“If they don’t score a goal they will always create opportunity for either themselves or a teammate to score a goal,” Kodzoman said.