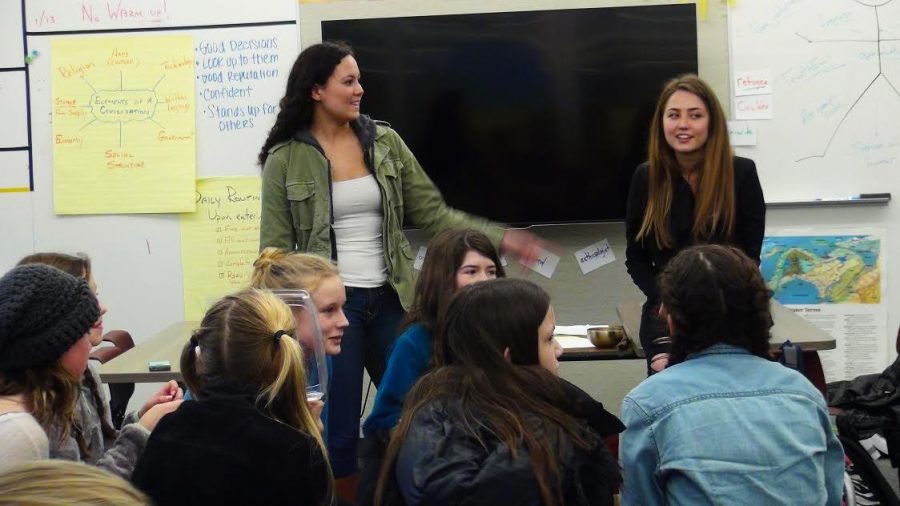 An energetic buzz fills the air, accompanied by the sound of crinkling brown paper lunch bags and the hum of excited voices. In the brightly lit classroom at Hall Middle School, seventh and eighth grade girls excitedly raise their hands to answer the prompt: “Who are role models in your life?”

Although the answers vary from YouTube stars to celebrities to family members, the majority of the girls’ role models are women.

This is a typical meeting of “Girls with Goals,” a club created by seniors Emily Caindec and Mackenzie Cullens that focuses on providing girls at Hall Middle School advice, mentorship and tools to aid them in their futures as high school students and beyond.

“The focus with Girls with Goals, the whole point of the club, was to impact middle schoolers. We realized that a lot of their information comes from parents or teachers and we wanted them to have people they could relate to,” Caindec said.

Cullens and Caindec help the girls tackle topics like bullying, gossip, friendship and other issues that frequently come up in middle school. In order to work with these problems, the club organizes interactive activities, such as answering anonymous questions from a question box and then having detailed discussions about each issue.

“We have question boxes because at the beginning they felt a little uncomfortable. Now, they barely feel uncomfortable with us because a lot of them know us and have talked to us,” Cullens said.

The club took off when they contacted Hall teacher Josh Evans, who they worked with to get the club off the ground.

“Mr. Evans really wanted a connection [between Redwood and Hall], because we’re right across the street, he didn’t really see much of a connection,” Cullens said.

Currently, Girls with Goals meets every Thursday to discuss a new topic during each meeting.

“One time, when we were talking about bullying, they [the girls in the club] really opened up to us about a lot of their issues and the emotional stuff they were going through,” Caindec said.

The pair feels like they have made a big impact at Hall because as seniors in high school, the younger girls look up to them and genuinely want their advice.

“It’s really fun,” said Sumaiya Bassa, an eighth grader at Hall Middle School. “We learn things about high school. They tell us what’s to come and easy study tips and things like that.”

Caindec and Cullens found that they had more of an impact on middle schoolers, who genuinely wanted their advice and knowledge than on high schoolers.

Girls with Goals started as an branch of another, coed, club that Cullens and Caindec run called Future Focused.

Future Focused at Redwood. We invite successful business women to come and speak about their career paths and what they do and make those lectures open to everyone at Redwood and the community,” Caindec said.

Cullens first had the idea to start Future Focused during her sophomore year. She was inspired by her desire to have a club at Redwood that was about planning for the future, because she thought it was missing from the clubs that were available.

Caindec and Cullens recruit speakers using connections through their classmates and parents to try to get a variety of successful women to talk about different career paths and how they work toward their goals.

The pair recalled that their most memorable speaker was the NBA International President Heidi Ueberroth, who spoke on June 2, 2015.

“It’s important to see that just because a job has to do with the NBA doesn’t mean that it has to be a man. It’s important for girls and guys to see that there are women in jobs that you wouldn’t see a woman in,” Cullens said.

According to Caindec, what really made Ueberroth stand out was her message telling people to give every opportunity a chance, because it can expand students’ knowledge of their likes and dislikes.

She said that the speakers usually stress that everyone’s road to personal success is a different one, and that there isn’t one set road or checklist to go through to be a prosperous and happy individual.

“Heidi took that one step further when she said to take advantage of everything and to take every opportunity given to you because even if you don’t end up liking that experience or that internship, you’re still a step closer to figuring out where you want to be,” Cullens said.

Cullens and Caindec plan to try to keep the clubs running even after they leave high school by passing them onto a student or pair of students who have been in Future Focused since the beginning.