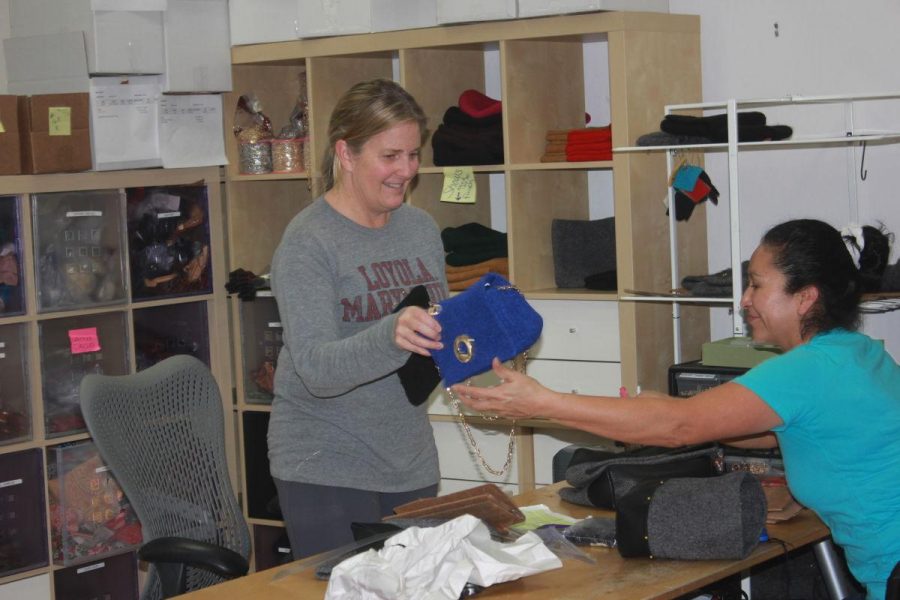 Entrepreneur Sarah Oliver passes a completed handbag to one of her employees. Sarah Oliver handbags are knitted by senior citizens of the Redwoods Retirement Community and customized with either a gold or silver brooch.

“We had a competition beforehand to see who could be the closest to how much we would sell after the show. I said we would sell 825 bags in the first week and we sold more than that,” sales representative Jenny McLaughlin said.

Entrepreneurs on “Shark Tank” attempt to strike a deal with multimillionaire investors Lori Greiner, Kevin O’Leary, Robert Herjavec, Mark Cuban, Barbara Corcoran, and Daymond John, among others, all of whom appear on the show in groups of five.

Oliver, owner of Sarah Oliver Handbags, was able to make the deal by giving up 30 percent of her company. In the future, she will have the opportunity to consult with “sharks” Lori Greiner, Kevin O’Leary, and Robert Herjavec about business expansion strategies.

Oliver said that she did not originally intend to start a business and was simply knitting handbags as holiday gifts more than a decade ago. After receiving positive feedback from gift recipients, she decided to make a brand out of her hobby.

After appearing on “Shark Tank,” the company has seen its sales skyrocket, McLaughlin said.

“I never wanted to be on Shark Tank––they actually approached me. I went into the ‘tank’ super prepared and I knew all of the numbers,” Oliver said. “I went in thinking this company has gone from me knitting a few bags to me pitching my company to the ‘sharks’ on national TV.”

Oliver was shocked that she was able to get three sharks to “bite” on the proposition of joining her in owning the company.

The small business, where Oliver and four other employees work, is located in Sausalito. It has been operating for 10 years and sells handbags that are hand knit by older men and women in Mill Valley, who live at the Redwoods Retirement Community, called the “Purlettes,” who are all in their late 80s or early 90s years old.

Knitter and “Purlette” Daphne Campbell, 93, started knitting in college and has continued ever since. She began working for the company a few years after Oliver originally came to the Redwoods in search of knitters.

“Two or three years [after Oliver came to the Redwoods], I joined in because I found I had a lot of time on my hands and that [the “Purlettes”] got paid. So far I have made over 1,000 bags,” Campbell said.

Since Oliver originally went to the Redwoods, she has gone once a week to visit the “Purlettes.”

“I meet with the knitters once a week. I have about 30 total, two of whom are men,” Oliver said. “The process starts with the ‘Purlettes’. When they are done knitting the wool, it comes back here and we wash it. Then once it dries, we shave the fuzzy stuff off of it and then we hand stitch the labels and put on the brooches and chains.”

Each bag comes with either a gold or silver brooch chosen by the customer when ordering. The bag also comes with information about the company, pictures of the “Purlettes,” and a quote from the person who knit the bag, according to Oliver.

Campbell said that working for Oliver gives the senior citizens an income when many of them are living solely on social security.

“We try to honor our knitters and tell their stories. So we did a photo series of their hands doing something that has to do with the company, such as knitting. We are all about engaging and employing the citizens in the workforce,” Oliver said.

There is a sense of community between all the knitters as they all knit together, according to Campbell.

“We meet in one of the lounges [at the Redwoods], and Sarah comes and talks to us and tells us how the company is doing and we sit there and chat while we knit,” Campbell said.

The company has three different distribution channels, according to Oliver.

“We distribute through our website, wholesale, and a direct-to-consumer show,” Oliver said.

Oliver said that while the company’s goal is to continue to grow the online business, telling the seniors’ stories, even with the company’s  increased fame from the show, remains an important goal.