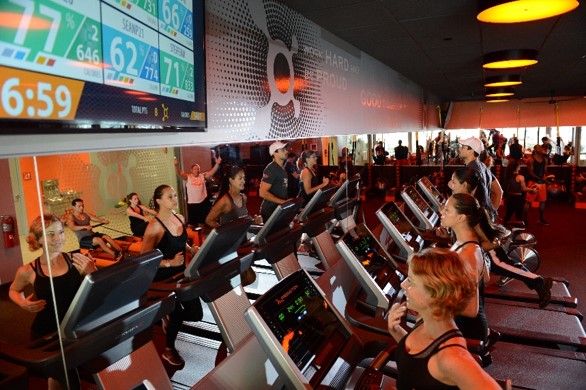 While the season of New Year’s resolutions winds to a close, some have found new inspiration to push themselves physically with the help of Orange Theory Fitness in the Bon Air shopping mall.

Orange Theory, which opened in Greenbrae on Jan. 2, is an interval-based exercise class that is split into both cardio and strength training. The goal is to keep your heart rate in the “Orange Zone” for an optimal time of 12-20 minutes in order to maximize metabolic burn and keep burning calories even after you leave the studio.

The Greenbrae studio is tucked between Whole Foods and Noah’s Bagels and is painted in warm orange colors. The Bark wanted to judge the effectiveness and the intensity of this class, so I enrolled in a class for beginners to test out this new fitness studio.

After arriving, I was given a heart monitor to fit around my ribcage (if you continually take the class you will be required to purchase your own heart monitor―either for your ribcage or your wrist). Though at first the heart monitor was uncomfortable and awkward, as the intensity of the workout progressed, I forgot its presence and focused more on the task at hand: completing the workout.

At the beginning of the class, I, along with 20 other people, were shuffled into the back room, which was set up with dim orange lighting. The lack of light made it hard to make out other people’s faces, as well as your own in the mirror, which was nice because I happened to be drenched in sweat.  To the right of the entrance, there was a row of treadmills, and to the left, a line of rowing machines. Behind these aerobic machines were weight benches with corresponding weight sets. On one wall there was a mirror, and each wall was plastered with inspirational quotes and words such as “believe” and “achieve.” The room echoed with pump-up music, and the atmosphere was electric.

The training was incredibly trying, but satisfying at the same time. The hour-long class consisted of running or speed-walking, rowing, and weights. I started on the treadmill for half of the class, which switched between jogging and sprinting, both on an incline and on flat ground. Then, when it felt as if my legs were lead, the “treadmill group” switched over to become the “rower group” and I began to work my arms as well, on both the rowing machines and with different size weights. The weight section consisted of deadlifts and squats to strengthen the arms, the legs, and the back. I have very little upper-body strength, so this part of the workout was taxing for me. However, if I were to continue with Orange Theory classes I would definitely improve in this department.

The information from the heart monitors that we wore were connected to a screen in the front of the class that flashed our names as well as our heart rates and a color so that we could check on your progress throughout the workout. Once again, the goal was to keep my heart rate in the “orange zone.” Keeping your heart in the “red zone,” the highest heart rate level, is acceptable, as long as you feel stable enough to continue with the workout.

Keeping my heart in the “orange zone” was exhausting as it requires you to push yourself hard. Afterwards, however, I felt amazing. The class gave me a boost of confidence after completing it, and I felt proud of myself for getting through such an ambitious class as well as being able to keep my heart rate in the “orange zone” for over 20 minutes of the 60 minutes class. I felt exuberant and ready to take on the rest of the day.

I would recommend Orange Theory to anyone who wants to get in shape. Exercising in intervals not only means a healthier and more demanding workout, but it also keeps you interested and involved. Whether you are trying to lose weight or just want a new fun place to exercise, check this class out for a kick-butt workout.