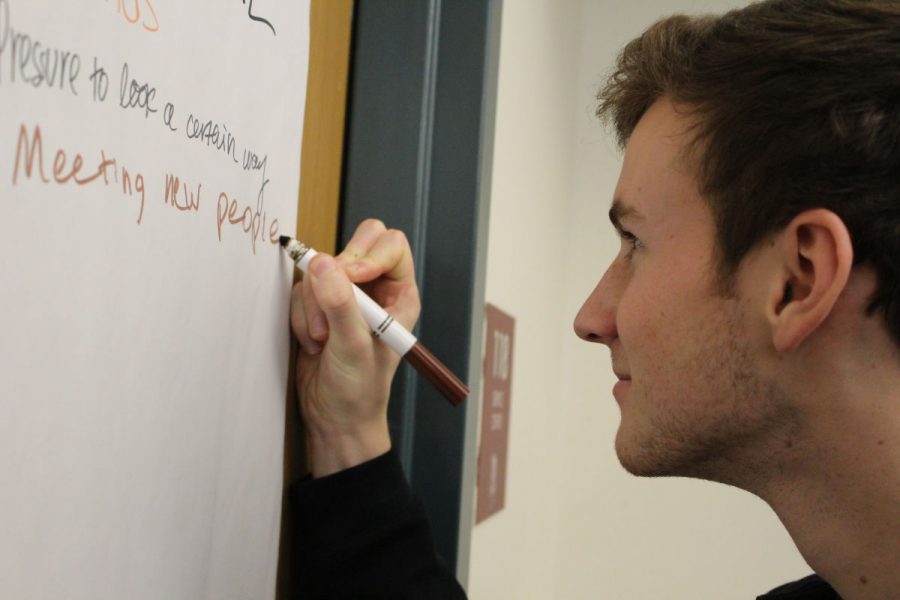 Junior Brendan Shepard writes on the wall during an activity about relationships and their impact on mental health.

The Peer Resource class participated in Mental Health First Aid training on Jan. 11-12  in an effort to learn more about mental health issues and techniques for handling mental crises.

Twenty-three PR students and two other students spent two days working with an instructor, Gina Ehlert, who taught basic information about mental illnesses, how to discern between mental illness and common anxiety, and how to work with students who need help.

While the training did not give students the ability to diagnose mental illness, it did provide them with some basic skills necessary in dealing with mental health scenarios, according to senior Carli Jacks, a student in Peer Resource.

“The idea is really getting people to understand signs and symptoms of mental health problems or challenges and being more aware of them and being able to encourage people to seek help,” said Ehlert, who added that since Mental Health First Aid training came to America in 2008, it has grown exponentially.

Students participated in a variety of activities during the training, such as roleplaying panic attacks, experiencing auditory hallucinations, and implementing a five-step action plan, according to Ehlert.

District Wellness Director Jessica Colvin had known about the training for adults, and when she heard it was offered for students, she decided to bring it to Redwood. Although the training is designed for adults, Ehlert felt that the Peer Resource students were capable of participating.

Colvin said that while this training was primarily offered to Peer Resource students, it could be offered to more students in the future depending on how the participants evaluate the training.

Jacks believes that a different format would be necessary if the training were offered to a larger group, and suggested that a presentation might be more suitable for the student body.

While the Wellness Center has not yet opened, there have been a few events aimed at increasing mental health awareness, including Mental Wellness Week in early December.

Colvin hopes that teaching students about mental health will help destigmatize mental illness in the community.

“My hope is to raise awareness for students to realize that mental health is welcome,” Colvin said. “It’s part of who we are and we all have it, and becoming aware and having the language to talk about it. [Students] might not have the words to describe how they are feeling and we might need to teach them about anxiety and depression and stress and what they can do to take care of themselves.”

According to Ehlert, mental health often went unnoticed in past years, but has recently garnered more attention.

“It just hasn’t been at the forefront of a lot of people’s minds for a number of years,” Ehlert said. “There’s been more federal funding put toward mental health in the last couple of years than there has been in the previous 30 years.”

Colvin attributes the lack of attention to mental health services to a stigma around mental health, and added that students often associate mental health with negative things, unlike physical health.

The Mental Health First Aid training provided relatively basic information and techniques, and according to Ehlert, also provided an action plan that can make an impact in the Redwood community.

“The action plan that is provided in the course really can be used throughout a lifetime,” Ehlert said. “It’s just a different framework for people to think about in terms of having a low-level role––not necessarily being a psychiatrist or somebody at a high level in the mental health field, but still being helpful to people, recognizing signs and symptoms, and encouraging people to get help.”