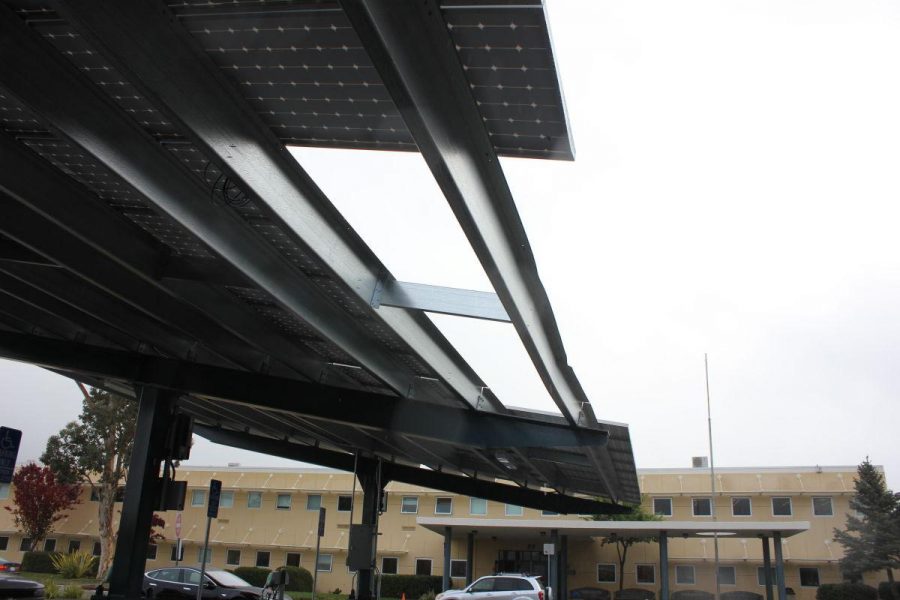 The damage to the solar structure, pictured here, was the result of the collision with a delivery truck on Thursday, Dec. 3.

A large truck delivering furniture to Redwood damaged the lower beam of the solar panel array in the front parking lot during seventh period Thursday, Dec. 3, causing three panels to fall and tear a gaping hole in the side of the truck.

Senior Aidan Perez was passing through the halls when he witnessed the incident.

“I was surprised at how much destruction a solar panel could do to a truck,” Perez said.

The truck was attempting to move left to allow cars and parents pass, but it got too close to the panels, according to vice principal Larry Pratt.

“It happened in stages,” Perez said. “At first the truck was stuck into the side of the solar panel, then [it] continued on driving forward, taking the solar panels forward with [it].”

Due to the ongoing conversations with the insurance of those involved, it is yet to be decided when the solar panels will be replaced and who will be responsible for paying the re-installation fees.

The structures were built during the summer and completed in late September. Since the construction of the solar panels, there have been several issues related to the new investment. A few days after the crash in another area of the lot, an electrical box connected to the panels was found smoking, sparking concern among administrators.The fumes were the result of a small wiring issue within the electrical box.