Face-to-Face: What does ‘going green’ mean to you? 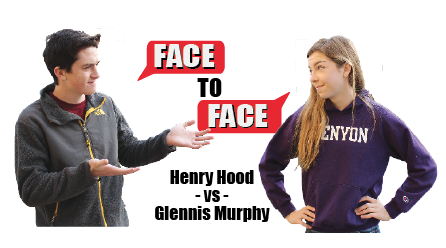 Face-to-Face is a feature that allows two members of the Redwood Community to grill each other, argue, or simply converse about a relevant issue or event. We provide the topic, and they do the rest. This month’s participants are senior Henry Hood and junior Glennis Murphy. They discuss the ongoing climate change debate, focusing specifically on the San Francisco ban that will completely phase out the sale of plastic water bottles in the city throughout the next four years.

Do you agree with the recent ban on plastic bottles in San Francisco?

Henry Hood: I agree with it. First of all, plastic is inefficient. So using different water bottles, such as cardboard water bottles that can compost or recycle infinitely, is better than plastic that can only be recycled two to three times maximum.

Glennis Murphy: I disagree with the ban. Obviously I think we should do what we can to protect the environment, but I just don’t think this is the best way to do it. It is unrealistic in a city like San Francisco just to say, ‘We’re not going to use plastic water bottles anymore.’ I just don’t think it is something people might actually follow and I don’t think San Francisco can keep up with this.

What are some realistic actions that people can take in their everyday lives?

GM: Obviously recycle, turn off your electronics, and take shorter showers. Just do what you can to reduce your footprint on the world. Be very aware of your position and what you do to the world.

Do you think kids at Redwood are paying enough attention to the drought?

HH: At Redwood, specifically, there doesn’t need to be much regulation because the school is a public school and it is already being regulated. And at home, the county is above state average and the state is doing a good enough job with water. We just need to continue what we’re doing.

GM: I know that in the Marin Municipal Water District, we have reduced our water usage by a significant percentage. I think kids at Redwood are really aware of what is going on and I know we’re a very environmentally conscious school.

Do you think there is anything our school should do differently to counteract climate change?

HH: There are individual people at this school that have specifically impacted Redwood, but what we’re doing right now in the Environmental Action Club is trying to educate people on continuing that at home and limiting their electronics and water use at home.

GM: I think we are pretty on track right now. We’ve got the solar panels and we have the water bottle fountains, which I know I use every day and I think it encourages people to use reusable water bottles instead of buying plastic bottles. As a school, we are so aware of what is happening. I think everybody here agrees that we want to protect the environment and that we want to prevent climate change.

What does “going green” mean to you?

HH: “Going green” I think has grown to be an old term. It has been overused and I think it was a good term, but kids and teens just oversee it. It is a good message, but I think a new term needs to created to get attention from the younger population.

GM: For me, when we were in elementary and middle school, “going green” was a phrase we used to raise environmental awareness. To me, “going green,” represents protecting the environment and I think it is catchy and a good phrase. But he has a point to address the younger population- maybe we should do a new ad campaign to get attention.