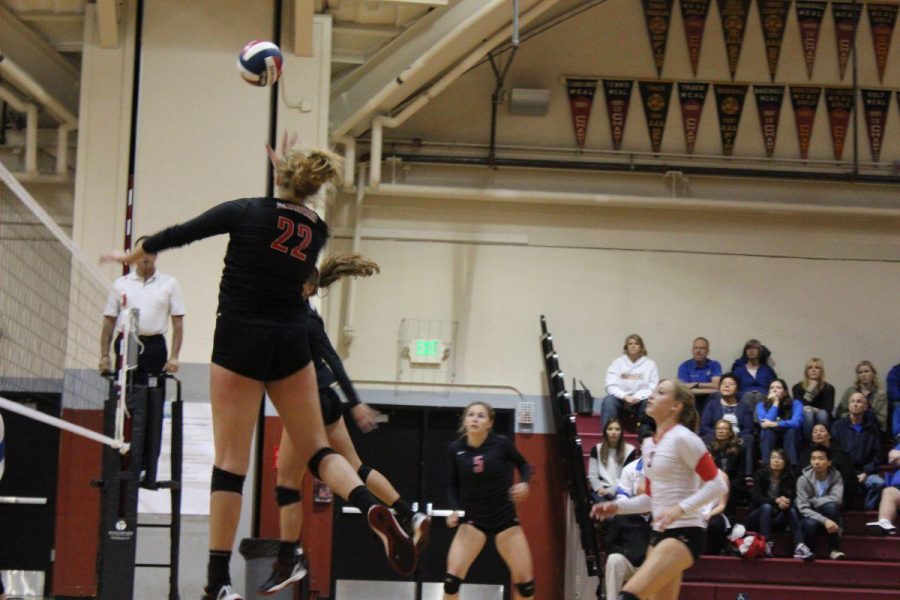 Senior Middle Margo Spaethling hits the ball during the first set of Redwood's NorCal semi-final game against Presentation on Nov. 28.

The girls’ varsity volleyball team’s deep playoff run came to a halt on Saturday night after they suffered a defeat at the hands of Presentation.

The girls’ varsity volleyball team lost in straight sets, by a score of 25-22 in game one and 25-21 in games two and three.

Senior middle blocker Margo Spaethling said that Presentation came out with guns blazing and Redwood was unable to adjust.

The Giants came out slow and dug themselves into a deep hole, starting down by at least 5 points in each set. When they were able to come back and take the lead, they couldn’t retain it.

“We could have played a lot better and we were kind of shocked at their level of play,” senior captain Elly Lundberg said. “I think we dug ourselves into early holes and it’s hard to play from behind the whole time—we were not able to gain momentum at all.”

According to Lundberg, the teams that Redwood has played in the past pale in comparison to Presentation.

“Our hitters were hitting it right at their defense. Our passes were too tight because their hitters were really good,” Lundberg said. “It was hard to go from teams we were crushing to a team like this.”

Presentation took control early in the first set by jumping out to a 6-3 lead. Redwood tried desperately to get back into the game, but the Panthers wound up winning the set 25-22.

In the second set, it was much of the same for both teams. The Panthers were able to keep a strong hold on the game and won the set 25-21.

The Panthers did not let up in the third set, jumping out to a substantial lead. That was until senior libero Lily Barber gave the Giants the lead on a seven-point serving run. Nevertheless, the Panthers were able to fight back, winning the set 25-21.

“They took us out of system, they took some big some big swings and got some big kills,” Pease said. “Our serving was not on par and we had a few too many unforced errors.”

According to Pease, Lundberg was a force offensively, accumulating 13 kills on 23 attempts with no errors.

When the game ended, the team came together, hugged, and went to shake the other team’s hands.

“We were off tonight, we were not playing as cohesively as we usually do,” Spaethling said. “This game does not represent how we have played this season.”