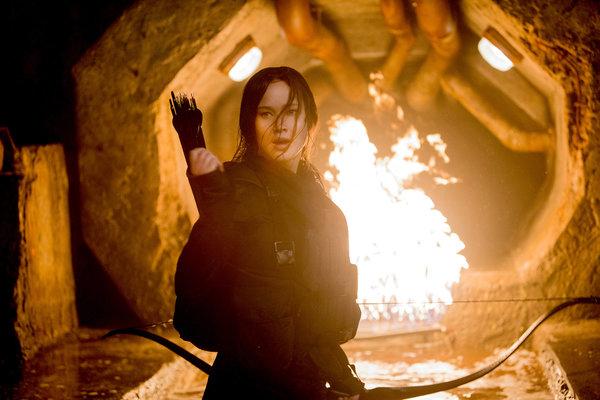 “The Hunger Games: Mockingjay Part II” begins where “Part I” left off, culminating “The Hunger Games” series in an entertaining combination of fast-paced action scenes and slower, emotional moments in this predictably well-done finale.

The film marks the return of familiar faces from the first three installments of the series and introduces new characters, evolving the plot without letting it overwhelm or steal the spotlight from the true heroine, Katniss Everdeen. Jennifer Lawrence continues her incredible acting as Katniss and many veteran actors of the series still shine in their roles: a shallow Elizabeth Banks as Effie Trinket, a gruff but loyal Woody Harrelson as Haymitch Abernathy, and a convincing Donald Sutherland as the odious President Snow.

The beginning of the movie feels slow, while the end sped up a bit. Altogether, the movie would have been better combined with “Part I.” However, the most important aspect of the movie, and director Francis Lawrence’s greatest achievement, is that the film is true to the book, a worth-noting feat in the film-making industry.

Throughout the long, but necessary 137 minutes of the film, Katniss and her close companions (including the ever-present Gale, played by Liam Hemsworth) leave District 13, embarking on a journey to the Capitol to join in the battle against President Snow. A large part of the film does not take place in the city, but rather in its outskirts, where the group must tread carefully to avoid triggering “pod” attacks from the same horrific monsters that threatened lives in the Hunger Games arenas.

Peeta (Josh Hutcherson) joins Katniss and her squad to be filmed in propaganda videos in an attempt to create a facade of order and alliance for the rebellion. However, when the cameras are off, he is treated more as a captive than a companion, since he still poses a threat to Katniss after his memories were hijacked. The former lovers are now threats to each other—meanwhile, Gale is thrown into the mix to make for a rather unconventional, twisted love triangle. Romantic love is of little importance to the actual movie, a wonderfully refreshing change to the romance-infused dystopian genre.

Tense moments define this finale, such as the eerie underground assaults, which feature an infinite supply of mutts (which look more like emaciated humanoids than dogs) and compensate for the lack of action in the previous installment. In “Part II,” close up shots of Katniss’s subtle expression are interspersed between these fast-paced sequences, which allow the audience to see into her mind, like the first person narration of the novels, and avoid cliche voiceovers. All the action does have a downside, however, as the audience hardly has any time to react, empathize with, or even miss some characters after their quick and untimely deaths.

The finale clearly completes the journey of Katniss’s character from a camera-shy, defiant girl born into poverty to a woman whose name is synonymous with that of a revolution and the silhouette of a mockingjay. Katniss’ evolution parallels that of Lawrence’s own as she developed from a nascent star to Forbes’ highest paid actress of 2015. Lawrence portrays Katniss with such skill that one is easily convinced she is not acting, but displaying a part of herself.

What is most impressive about “Part II” is not actually the film itself, but the message it delivers about the film-making industry. Katniss does not fall into a female stereotype and she isn’t defined by the men in her life, rather, they are defined by her. “The Hunger Games: Catching Fire,” was the first film with a solo female protagonist that topped the annual domestic box office in four decades. Katniss is a dynamic mix of anomalous characteristics: she is tough, yet vulnerable, loyal to her friends and defiant against injustice, powerful, but not power-seeking. If Katniss can cause a revolt in fictional Panem, perhaps Lawrence can cause a revolution in our world by redefining female characters in the movie industry.