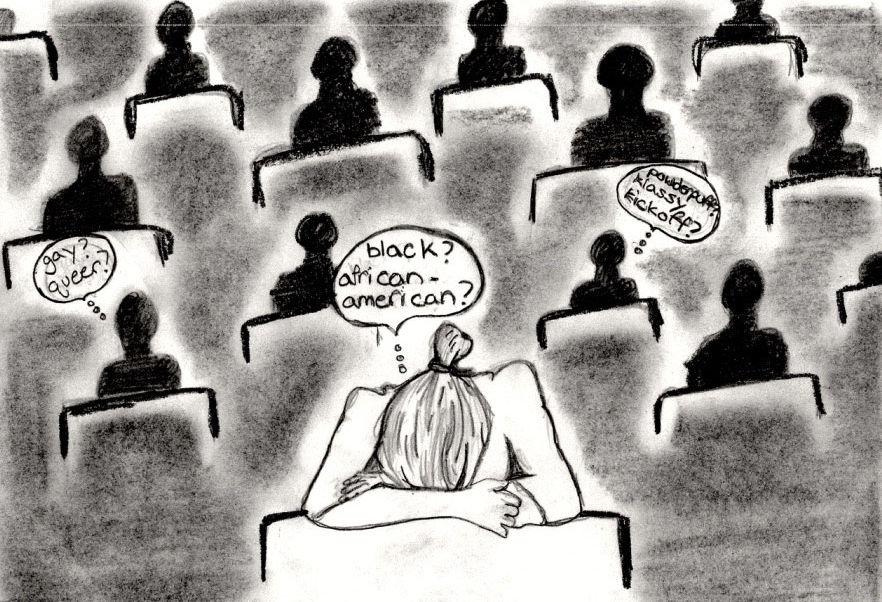 “Black or African American? LGBT or LGBTQIA?” These are thoughts that run through my mind as I sit in class, wondering whether to raise my hand and risk using the “wrong” terminology. And I am not alone. As a community, we are only scratching the surface of progressive discussions because we bicker over language and vocabulary rather than discussing the issues themselves.

Being politically correct is “agreeing with the idea that people should be careful to not use language or behave in a way that could offend a particular group of people,” according to the Merriam-Webster Dictionary.

Political correctness has stalled the validity and progress of complexly debated, sometimes bipartite subjects, such as sexism, gender identity, and racism. It is a road block for achievement and growth in our society. We need to stop succumbing to a culture that controls the way we discuss controversial issues in our nation.

Within the Redwood community, many students, teachers, and administrators seem to be overly concerned with sensitizing complex issues and not offending people during discussions. More often than not, discussions are put to bed before they even begin because students are worried about offending others.

This fall, for example, students heavily debated the recent name change of Powderpuff football. The longstanding high school tradition, when junior and senior girls play against each other in a game of flag football, was reinstated at Redwood after being suspended last year due to physical altercations that broke out in 2012 and 2013. However, the game was renamed “Klassy Kickoff” after the administration asked the Leadership class to change it, partially because of its “sexist origins.”

The bigger argument, however, is not whether the name has a sexist connotation, but whether the game itself perpetuates sexism. By just debating the name, we are neglecting to debate the real issue of sexism. More important, how is an official name change going to improve social culture at Redwood? What exactly are we trying to achieve? The real step toward progress is in discussing the game itself, not just its name.

For example, one student mentions the growing acceptance of the LGBT community, while another corrects them, noting that the latest rendition of the term is LGBTQQIP2SAA (Lesbian, Gay, Bisexual, Transgender, Queer, Questioning, Intersex, Pansexual, Two Spirited, Asexual, and Allies). The updated acronym has changed as new terms have been added and deemed “politically correct.”

I worry about leaving something out of the acronym, so I tend to shy away from the topic in fear of offending someone. I understand that many genders and sexual orientations haven’t been included in broader discussions about equality rights until recently, which is why those individuals may want recognition, but we aren’t changing anything when we choose to debate the acronym instead of people’s true thoughts on gender and sexuality. Are we helping or hurting the cause?

Racism is also often not allowed room for social progress due to the pressure to be politically correct. In classes I’ve taken at Redwood, there have been attempts to start conversations about the prevalence of racism within our community, but these conversations seem to come to a halt. One student is worried about sounding insensitive or rude, or just not knowing which term is “right,” and slowly other students begin to realize they may be judged for commenting on the topic.

In AP U.S. History last year, for example, my classmates and I debated the textbook’s choice to use the term black instead of African American––we debated the use of the two titles instead of discussing the issues of race themselves.

We need to address that, as humans, we may all be inherently slightly racist, and we all have flaws and prior judgements based on the environment in which we grew up. Once we accept that truth, the conversations can truly begin.

Even as I write this, I’m struggling to be politically correct, as it’s hard to approach controversial issues and not offend anyone throughout the process. Perhaps if we stopped trying to please everyone and began to actually discuss controversial subjects, we would make more progress as a community.