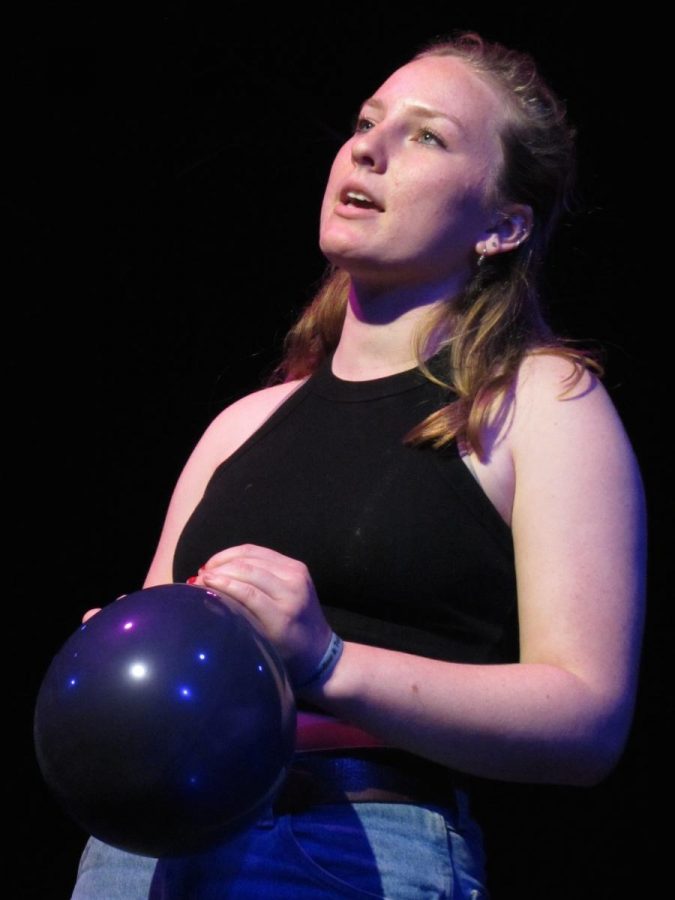 In a 2010 production of the Sound of Music, senior Sofia Cassidy enters the stage as Maria, singing a cheerful melody, smiling wide. She forgets her troubles and thoughts of her parent’s divorce. In that moment, she is just Maria.

“My parent’s divorce hit me really hard,” Cassidy said. “Going on stage, singing such happy songs, taking on such cheerful characters who inspire so many kids, [that] was my lifeline. It helped me forget about what was going on at home, to try and focus on something new and positive.”

Along with Cassidy, other Advanced Drama students have reaped similar benefits.

“When I’m feeling angry or depressed, I can just come to the drama room, into an accepting community, and just act as myself,” senior Ann Caindec said.

The use of drama as a therapy is reflective of a particular school of drama called Neo-Futurism, where actors ‘play’ themselves exclusively. Advanced Drama’s upcoming production, In a Nutshell, is based on this idea.

“There’s no asking the audience to suspend their disbelief, it’s something that I think a lot of people will respect and enjoy,” said junior Kate Kiehfuss. “You can make a play about your depression, for example, just by standing on stage with a balloon in hand and letting it go. It only has to mean something to you –– it helps me listen to whatever impulse is in me.”

Drama’s therapeutic qualities have not only benefitted theater students, but also inmates, high risk youth, and hospital patients. In the psychiatric world, this is known as “drama therapy.”

“Drama therapy is a way to buffer trauma, to create a preferred story or a way to discuss trauma in a safe way,” said Dr. Myriam D. Savage, Southern California Chapter President of the North American Drama Therapy Association, an association established 36 years ago.

Savage said she prefers drama therapy to typical counseling because it allows for deeper introspection and greater patient-to-therapist trust.

“You may be doing a role that is so close to home that you understand it, or [be] so removed that you understand it in a ‘role reversal.’ It gives you perspective,” Savage said. “Trust-building is inherent in the process. You aren’t sitting behind a desk with a counselor, rather, you are up and about, making masks and costumes together, reciting lines.”

Through observational studies, Savage has seen that the collaborative nature of drama therapy improves the confidence and overall mental health of children, inmates, and disabled patients.

“Drama allows you to speak of things that are taboo, things that you’ve kept inside, without actually exposing your personal connection to the subject,” Conran said.

Locally, the Marin Shakespeare Company, a theater company, offers weekly Shakespeare classes at San Quentin Prison. According to the company website, the inmates rehearse each Shakespeare play for about 8 months and are joined by a few outside actors in the final months, some of whom are students training for a master’s degree in drama therapy. These efforts culminate in an annual performance, which was on Oct. 23 this year.

In addition to performing Shakespeare plays, the inmates have written and performed autobiographical stories. Their plays revolve around compelling events from their personal lives. Some of the scripts are publicly available on the Marin Shakespeare Company website.

While San Quentin Prison continues to support drama therapy, other prisons have yet to accept it, Savage said.

“Sometimes there is a reluctance to give inmates therapeutic resources for reasons like, ‘Oh they’re criminals who don’t deserve this,’ or ‘It’s too expensive,’” Savage said.  “But in reality, if you want to prevent in-prison violence and someday reintegrate these people into society, they will need a safe therapy.”

This hesitance to implement drama therapy is also found in schools, often due to a lack of funding or interest, according to Savage.

“They think that counselors are enough, but they aren’t. Drama therapy is more effective in preventing violent outbursts in high-risk children,” Savage said. “This actually saves the schools money in the long term –– you likely won’t have angry kids destroying school property.”

Members of the National Association for Drama Therapy are currently interested in working with congressmen to implement nationwide trauma intervention programs in schools.

“People who have access to theater programs don’t realize how privileged they are,” Savage said. “Drama unlocks repressed thoughts; it gives way to whole new beginnings.”