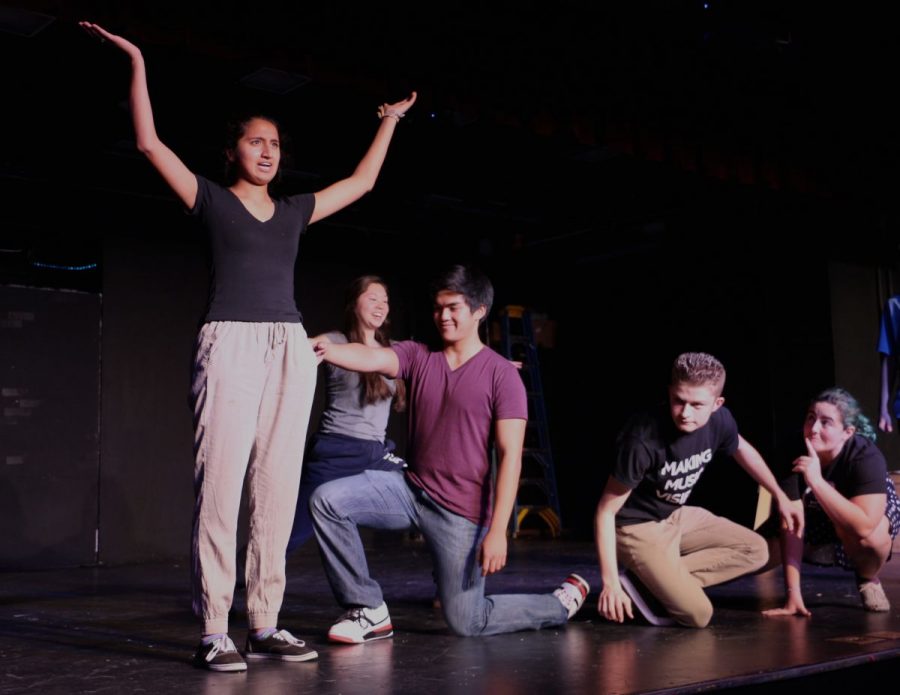 “Micetro” is a drama performance that has been produced for several years by EPiC.  To begin the show, a group of junior and senior improvisers all come onstage to be introduced, each with their own song and improvised dance move. Afterwards, the improvisers play several different improv games to earn points and finally crown a final winner, otherwise known as the “Micetro.”  The “Micetro” is determined by the volume of applause at the end of each game.

Each game includes four improvisers who are randomly selected, along with the occasional audience member who joins the cast. All games are based off audience suggestions to make the show more interactive. The show involves a variety of games such as Objection, Slide Show, and My Movie.  Objection is a debate game between improvisers, while Slide Show and My Movie involve reenacting a scene based on another improviser’s idea.

The improvisors met for the two months prior to the show in order to master the art of improv, according to sophomore Ali Janku, the stage manager of “Micetro.”

“We kind of over-prepare for the show because it is improv. We play games, work on technique, and just warm them up for the show,” said Janku. “The preparation is really that there’s no preparation and that’s hardest part. Trusting yourself and having the confidence to just go for it is what makes the show great.”

Performing improv is all about the improvisers knowing their way around the stage, and being able to to navigate out of a sticky situation while giving the scene some plot, according to Janku.

Senior improviser Ally Van Dorsten is performing in “Micetro” for a second year and says that there’s more to acting in the show than just being funny.

“You have to train your brain to be able to think really quickly and not have something planned,” Van Dorsten said.

Van Dorsten was first introduced to “Micetro” her sophomore year when she watched a show at the Redwood Little Theater.  She was motivated by the humor of the cast as well as the confidence they had on stage, and wanted to become just as skilled.

There are no expectations when walking on stage and creating a scene, according to Van Dorsten.

“The key is to walk out on stage knowing that it could go terribly, or it could go awesome, all depending on the suggestions of the audience or which game you play. It’s so exhilarating walking onstage not knowing anything,” Van Dorsten said.

When performing, Van Dorsten believes she is well prepared.

“I trust my process and try not to think about it. I’ve been practicing for months. I basically do whatever I can to keep confident.  Worst thing that happens is that I do a terrible scene and move on,” Van Dorsten said.

Besides just entertaining the audience, the “Micetro” cast is trying to showcase a different side of improv, one that is deeper and more heartfelt than just humor, according to Van Dorsten.

“I know people go to “Micetro” to see the show because it makes them smile and that it’s funny, but we are trying to get more people engaged than just hippy-dippy humor. I wish people were more cognizant of the fact that “Micetro” isn’t just a ton of naturally funny people,” Van Dorsten said.  “Improvisers need to commit, and that’s what we’ve gotten good at.”