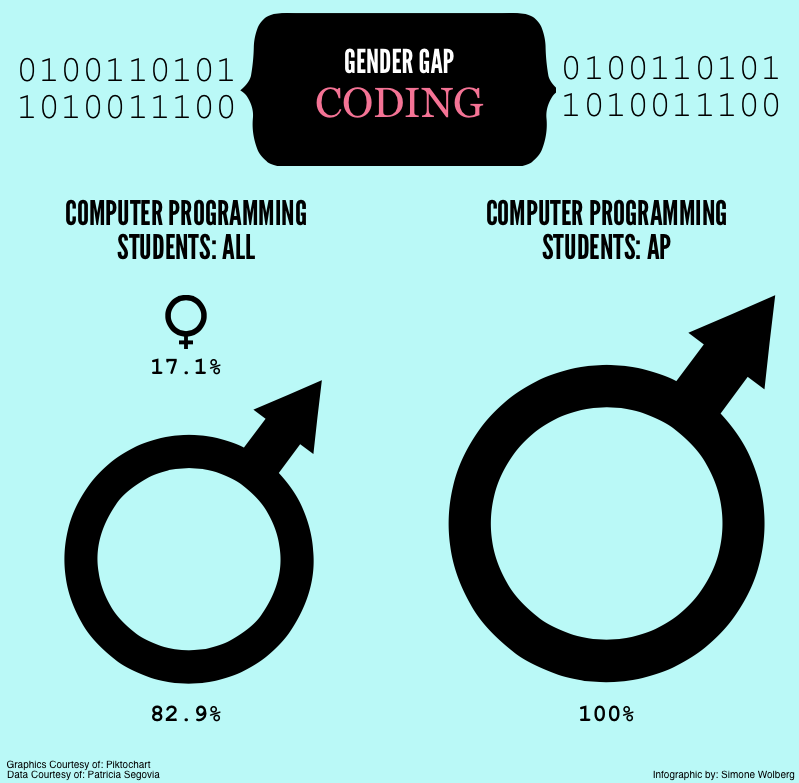 Out of 76 computer programming students at Redwood, only 13 are girls. There are 15 students in AP Computer Science A, none of whom are girls.

Technology teachers William Crabtree and David Goldsmith believe this gender divide is perpetuated by a failure of district leadership. Three years ago, the Tamalpais Union High School District dropped Redwood’s applied technology school-wide requirement. In doing so, the district allowed cultural stereotypes to influence the course choices of both male and female students, according to Crabtree and Goldsmith.

“The district got rid of the requirement, with [ex-superintendent Laurie Kimbrel] referring to our generation as being ‘digital natives,’ which is probably one of the most misguided statements ever,” Crabtree said. “Redwood students aren’t digital natives, they are digital users who aren’t creating any kind of marketable and usable program. Girls and boys alike should be required to learn these skills, so that they don’t opt themselves out for silly reasons like stereotypes.”

Goldsmith and Crabtree have pushed for a revised computer requirement that would incorporate coding into the curriculum.

“Our former assistant superintendent said students get these coding-like skills in other classes, but they don’t,” Goldsmith said. “In the past four years the district heads never took our revised requirement before the board. All we ask for is a semester of learning.”

Redwood’s applied technology classes became an optional elective with the removal of the district-wide technology requirement, formerly called “Intro to Computers.” While computer programming was not an official part of “Intro to Computers,” Goldsmith said he taught students the basics of coding within that class.

“The requirement gave every boy and girl an opportunity to learn how to code, among other essential tech skills.” Goldsmith said.

This reflects a statewide trend. Of the 4,964 students who took the 2013 AP Computer Science A test, only 21.64 percent were females, the College Board found.

Robin Hauser Reynolds, Tiburon-based director of the documentary Code: Debugging the Gender Gap, observes and documents these frustrations. The documentary screened at the U.S. Congress and the Department of State, in addition to local venues such as the Mill Valley Film Festival.

“Some of the resistance in schools across the U.S. is that coding doesn’t really fit perfectly into any of the core subjects,” Reynolds said. “Rather than trying to create a separate class, coding could be used as a tool in many different subjects. In science class, for example, you could run a piece of code to analyze a data set.”

Locally, A.E. Kent Middle School is pioneering this effort. Reed Maltzman, a former eBay executive, teaches “Coding 7,” a coding class for 7th graders. Last year, 23 children enrolled—13 were boys and 10 were girls. The same number enrolled this year, with a breakdown of 15 boys and eight girls.

In a similar effort, hundreds of elementary schools are integrating coding applications, such as Kodable, into their curricula.

According to Reynolds, these multi-platformed applications and local efforts alone will not convince those influenced by cultural stereotypes to change their minds.

“Less than 18 percent of women are in computer science related fields. One factor is the stereotype of the programmer,” Reynolds said. “A lot of girls think of programmers as a nerdy boy or man who likes to work alone in a basement. Girls don’t see themselves fitting in that.”

“There’s a misperception that all coders are anti-social nerds which stems from bad advice. Advice typically comes from parents, friends, teachers, counselors, and by and large most of those people don’t know how to code,” Crabtree said.

A lack of girl role models also contributes to the divide, Reynolds believes.

“In pop culture and mass media we see few, if any women figureheads in the coding industry,” Reynolds said.

Meanwhile, national attempts to close the coding gender gap have been more successful. In 2013, Code.org launched the annual “Hour of Code” campaign to advocate for more computer science education. After the first week, more than half of the 15 million student participants were girls.

“Right at this very moment there are 500,000 unfilled software engineering jobs in the U.S.A,” Reynolds said. “If just a handful of the seven million girls who participated in ‘Hour of Code’ loved it and pursued it as a career, we’d be set.”