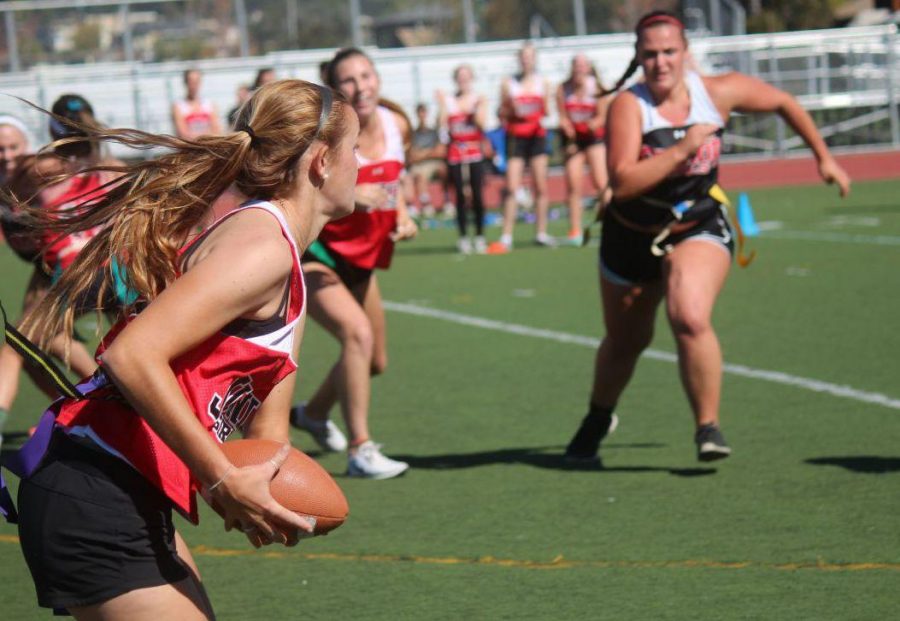 The senior girls narrowly defeated the junior girls by a score of 12-6 in the first annual “Klassy Kickoff” event on Friday.

The game started with a grim outlook for the seniors. Junior Neeve Kennedy intercepted a pass in the the end zone and on the following play junior Lauren Foehr caught a quick pitch and ran it in for a touchdown.

The seniors eventually got their groove back, securing the ball for the majority of the game. They ended up scoring two unanswered touchdowns, including a 35 yard pass to senior Kayla Rose in the end zone.

“Klassy Kickoff” is the reinvented version of “Powder Puff” or senior vs. junior girls’ football during Homecoming week.

Following several consecutive years of fights during Powder Puff games, the administration decided last year that the event would take a hiatus, but decided to reinstitute it this year when they were approached by members of Leadership.

“We had three years in a row of fights during or after [Powder Puff games],” said Assistant Principal Katy Foster. “We also heard in the stands a lot of inappropriate commentary.”

Senior Kendra Loo, captain of this year’s senior team, was one of three Leadership students to approach the administration about restarting girls’ football during Homecoming week.

“I had watched Powder Puff my freshman and sophomore year and I thought it looked like so much fun. Then, unfortunately, it got cancelled because of [fights] and I knew it needed a year off. But this year, since it’s my senior year, I decided I wanted to play,” Loo said.

The Leadership class had to make several changes in order for Powder Puff to be reinstated.

According to Loo, there had to be a lot more passing in order to spread out the playing field, and everyone who wasn’t coaching or playing had to be on the bleachers to decrease crowding on the field.

Leadership also made more significant changes to the game.

“We’re trying to rebrand it,” Loo said. “It’s now ‘Klassy Kickoff’ because Powder Puff has in the past been used as a sort of sexist term.”

Foster said that the administration had problems with the origin of the Powder Puff game.

“Way back when, it was hilarious that girls could think they could do something athletic,” she said, adding that the year off gave the administration an opportunity to reevaluate any inherent sexism in the game.

After the game came to an end and everyone shook hands, Principal David Sondheim told the girls that they set a great example for the years to come.

“It was a clean game,” said senior Kayla Rose, who scored both of the team’s touchdowns. “I think everyone did a great job making sure that we can continue on with the Klassy Kickoff legacy.”