Senior creates program to educate youth about nutrition and exercise 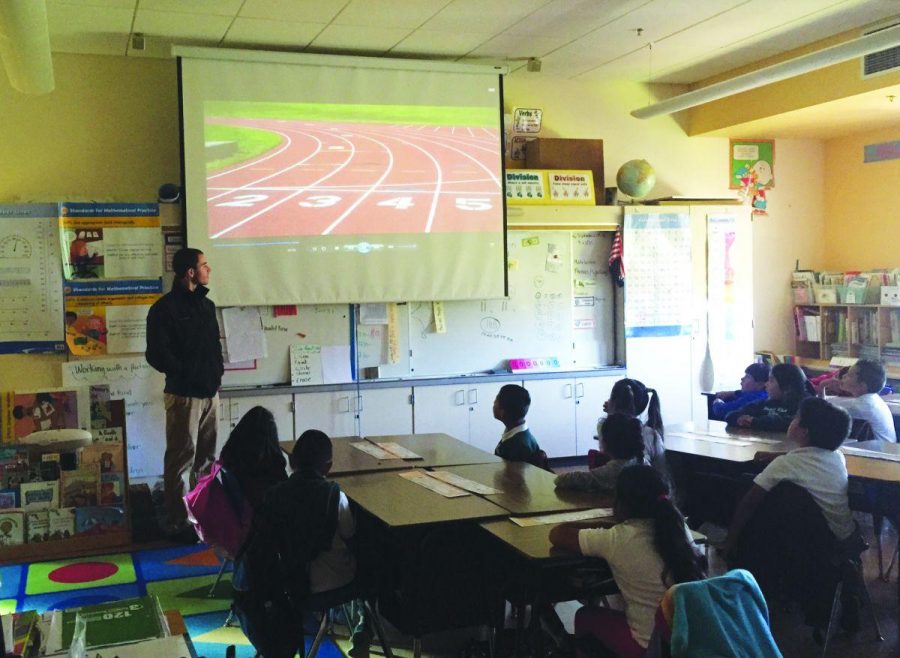 Pritikin presenting at Bahia Vista, an elementary school in the Canal District

Many students in elementary school and middle school look forward to P.E. and the competition that accompanies team-oriented games such as flag football, basketball, and kickball. However, a selection process is often used when assembling groups, and naturally, some kids feel left out with the order of choice favoring the athletic kids or kids who are slimmer over kids who are overweight.

This idea of exclusion is what sparked the inspiration for senior Ethan Pritikin to not only change his own lifestyle, but to encourage other kids to become more active and conscious of their personal health and nutrition.

“When volunteering at a school my eighth grade year, I saw a kid get excluded because he was overweight and not athletic,” Pritikin said. “When I saw that kid get excluded, it made me realize that I wanted to inspire other students to make similar transformations and improvements if they wanted to.”

Pritikin was of an average size when he was a child and was not conscious of his weight until he attended a summer camp called “Steve and Kate’s.” At this summer camp, there was buffet style food and children often found themselves overindulging, even Pritikin, who ended up gaining 12 pounds that summer.

“It was the summer of fifth grade when I realized that I wanted to change how I looked,” Pritikin said.

Pritikin began to monitor his food intake and exercise more closely, and made some observations about how children who were not the conventional idea of athletic were regarded by others, particularly when it came to team sports.

“When I was overweight when I was younger, I started running. When I became more athletic, I felt more included,” Pritikin said. “It was not like I was formally excluded, but it was like being picked last for teams or just not feeling as if I fit in completely.”

While volunteering, Pritikin witnessed this exclusive behavior as a third party and was motivated to encourage younger children to become more aware of their health.

In eighth grade, I saw an opportunity to create a class, and to basically be a mentor to students who were trying to become more athletic and more active,” Pritikin said.

When Pritikin was trying to change his lifestyle, he received a lot of encouragement and support, specifically from his former fencing coach, who initially encouraged him to begin running and get active.

“When I became more athletic, I had a lot of mentors helping me,” Pritikin said. “I saw people who were like myself, and they had no mentor, where I had a coach who helped me and my parents were very encouraging.”

As a freshman, Pritikin attempted to institute an afterschool program that would give inactive students an opportunity to exercise and learn more about nutrition. However, his first attempt, at an elementary school in the Canal District called Bahia Vista, was not successful and did not attract many participants.

Pritikin wanted to attract more students and have more freedom with his program.

“My junior and senior year, I switched to Davidson. It is much more open in a sense and they let volunteers do much more,” Pritikin said. “Sometimes I have almost 20 kids in the program, so there is much more participation. It is also older students, so in a way it is easier to instill the values instead of just becoming more active.”

Pritikin developed these values, such as self-discipline and personal motivation, on his own journey.

“They always just want to play the game, but I try to tell them that the practice is just as important. You need to practice the self-discipline that you need to do something, even if you don’t want to do it,” Pritikin said.

Pritikin has been able to apply these values to other facets of his life, and hopes that the kids in his program will recognize these applications as well.

This program is a weekly class that Pritikin runs by himself, free of charge. The class often includes a short running warm up, skill-related practice, such as dribbling a basketball or passing a soccer ball, and a sports game.

In addition to this regular program, Pritikin has also volunteered at local schools in more than 34 different classrooms, presenting to more than 850 students. In these presentations, he shares his story with a series of accompanying videos that he has made about his journey as well as ways that students can stay active on their own.

With his own graduation approaching, Pritikin hopes to gather more people who are interested in continuing health and exercise education for the youth in Marin County.