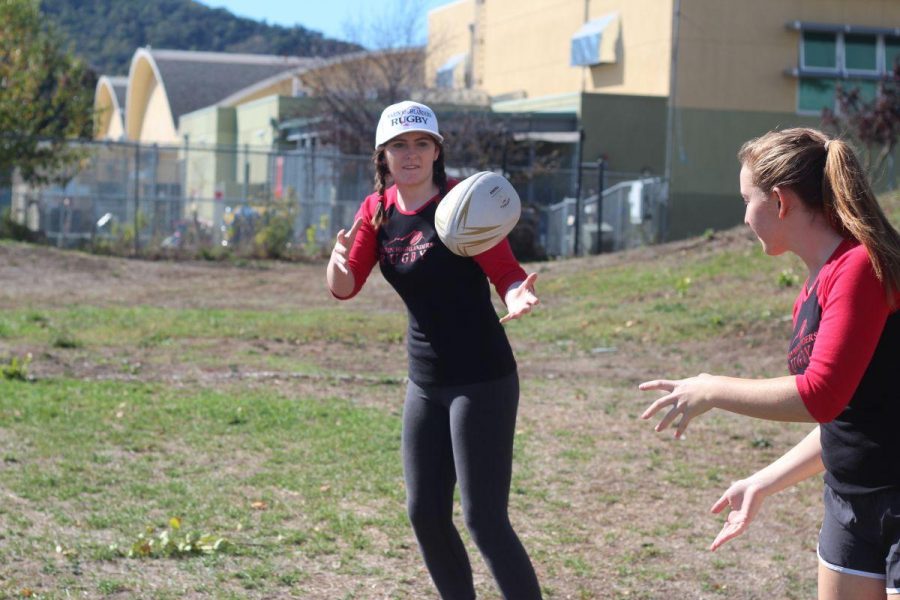 In a time of progress and empowerment for women, a sport traditionally perceived as a man’s game has been adopted by a group of Marin girls.

The Marin Highlanders Rugby Club has launched the beginnings of a girls’ team and is in the process of recruiting young women to join the new program. Rugby allows girls to be physically and mentally strengthened, and at the same time prepares them for a much-needed role in the athletic world, according to Marin Highlanders coach Lauren O’Connor, who will coach the girls’ team.

The team, once past the recruitment stage, will practice at Piper Park in Larkspur or Town Park in Corte Madera and play games on the Redwood football field.

The team will play other girls’ teams in the Bay Area such as the Danville Oaks and Pleasanton Cavaliers.

The creation of the team provides a unique sense of empowerment to the young women involved, according O’Connor. It not only allows the girls to grow physically and mentally, but to break past barriers that may exist regarding perceptions on what girls should be allowed to play, she said.

“You’re allowing a group of women and girls to play a sport that builds upon different strengths and weaknesses, whether that has to do with physical abilities or mental capabilities,” O’Connor said. “You’re essentially proving to a person or individual that they are capable of accomplishing something they didn’t know they could before.”

Senior Megan Pritchard, who recently began playing rugby and will be one of the members of the new team, was motivated to join because of the gender boundaries broken down by the team.

“It really gives empowerment to women. You get really strong. I would honestly say you could get as strong as guys, if not stronger. It makes you a lot stronger as a person, mentality wise too,” Pritchard said.

O’Connor believes that as a female coach, she provides a level of understanding that the girls would not be able to get elsewhere.

“I think that from the girls’ perspective, I provide a different outlook as far as coaching is concerned,” O’Connor said. “A majority of coaches tend to be male even in female sports and I think it’s important to have that relatability in the player-coach relationship.”

The goal is to create a team that is able to compete. To do this, the team will need to have enough players on the pitch as well as develop the skills of the players, most of which have never played the sport before.

“We want to be able to field a team,” O’Connor said. “From that aspect, I’d like to see the team grow in terms of their skill level and being able to compete…people need to learn to play who have never played before.”

According to Melissa Hardiman, a Marin Highlanders board member who helped spearhead the creation of the team, the club has wanted to create a girls’ team for many years, but for several reasons it was never possible until now.

“It was always a matter of resources. Do we have enough fields? Do we have coaches? We live in Marin County… and we don’t see a lot of girl football players out there. So I just thought, ‘How is that going to happen?’” Hardiman said.

The recruitment of Marin girls is an essential part of building the team. To do this, O’Connor, Hardiman and team members such as Pritchard put up posters and held meetings to spread the word.

By recruiting from schools around Marin, the girls are given a unique opportunity to form a close bond with girls from around the county that does not exist in many place, according to O’Connor,.

“The other part of that is to grow a community within the high schools in Marin,” O’Connor said.  “It’s a unique sport in that it allows us to pull from various schools, leading to girls being able to hang out with people they would have never ever met before.”

With increased growth, O’Connor and Hardiman hope to be able to develop a vigorous program that caters to girls of all ages from all around the county.

“From a larger level it would be great to see it evolve to where you have all age groups playing together, and all age groups mentoring each other, and really creating a team.”

Women’s rugby will be appearing in the 2016 Olympics for the first time in 92 years, which has provided a need for more collegiate athletes in the sport and created scholarship opportunities for players.

“I’m so excited about this year because I’m reaching out to colleges, and hopefully going to be [able to] to play with colleges,” Pritchard said.

Additionally, as the Olympics are likely to create a rise in the popularity of the women’s sport, girls who have already been playing will have the upper hand in obtaining scholarship and sponsorship opportunities that will likely arise, O’Connor said.

Unique opportunities such as these are what make rugby so appealing, according to Hardiman.

“[Rugby] is probably one of the most exciting sports in the world,” Hardiman said. “There are wonderful opportunities that surround it. That includes relationships and schools…[the girls] would enjoy not only the game of rugby but the family and community that is built around it.”