Youth Activists: The voice of tomorrow 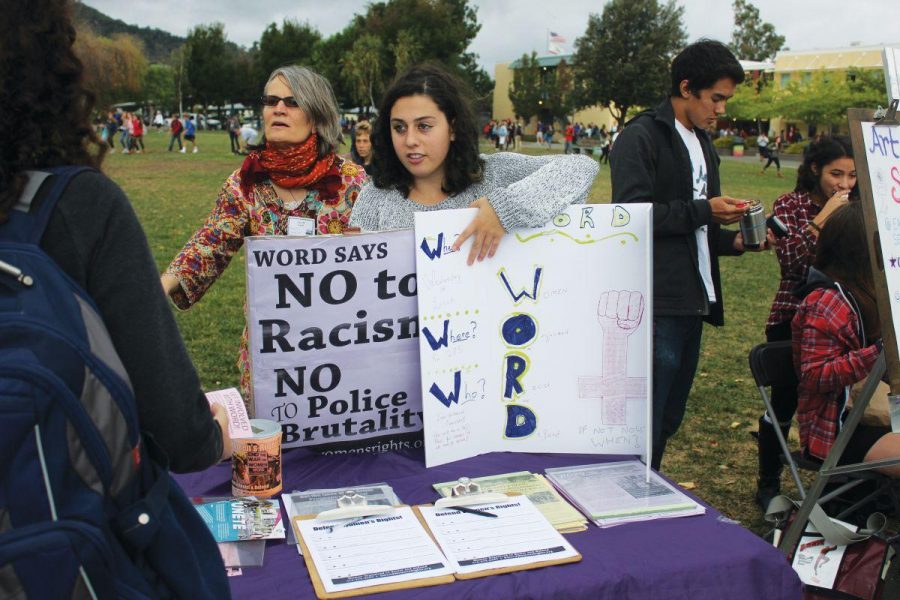 Senior Ruby Elson recruits members for WORD during club day with the help of Anne Gamboni (left), a member of their San Francisco chapter.

In recent weeks, Facebook and Twitter have been flooded with long rants and supportive pictures in response to the Planned Parenthood funding debate. Teens have overlayed their profile pictures with “I stand with Planned Parenthood” filters, as well as posted diatribes against those with different views on the matter.

This outreach by the youth community is not in any way new. In fact, youth activists have spearheaded many social and political movements throughout the centuries.

“Teenagers feel things so strongly, so if they see something that seems unjust or unfair or wrong, they want to [make it right] and I just think that that drives students,” said guidance counselor Lynne Kennedy. “They don’t have some of the cynicism that some adults can have after they’ve weathered a few bumps.”

There are many different reasons why people become activists, according to sociologist Susan Rahman, a professor at College of Marin.

“It could be frustration with the system that they’re living in and wanting to see it different. I’ve also seen it where people join because their friend is doing it and so they end up getting into it,” Rahman said.

Psychologist Mary Ann Barr said that because adolescence is a period of finding oneself, teenagers are more compelled to join strong political movements.

“What we all go through is a period of time when we’re trying to find our identities,” Barr said. “It’s basically through the period of adolescence to early adulthood.”

According to Rahman, activism is usually something that people get involved in during college.

However, in recent years, high school students have been getting more involved through student clubs that bring to light a lot of world issues, Rahman said.

An outspoken member of the activist community at Redwood is senior Ruby Elson.

“The stereotype is that teenagers are angry, but the reason why we’re so angry is because we’re growing up and realizing how [expletive] the world can be,” Elson said.

Elson spent her summer interning at an organization called ANSWER, an acronym for “Act Now to Stop Wars and End Racism.” The organization partners with a program called WORD, “Women Organized to Resist and Defend,” which Elson has turned into a club at Redwood.

“A common question I get is: What are we resisting? What are we defending? My response to that is: We’re defending our autonomy as women and we’re trying to resist our socialized conditions under the patriarchal rule,” Elson said.

Elson has always considered herself a feminist and activist, and said she draws inspiration from her childhood. Her father ran a free health clinic at Haight and Ashbury for 15 years, and her grandfather defended both the Black Panthers and Mario Savio, and did pro bono work for criminals facing the death penalty.

“I remember going to protests when I was little,” she said. “I went to one about genocide in Darfur when I was 7.”

People who have a life long upbringing in doing work in the service of others have a good chance of going into activism themselves, according to Rahman.

“For people who are brought into [activism] at a very young age, it’s just normal,” Rahman said. “Activism in the family is a good way to fuel activism in people, but I don’t think it’s the only way.”

To Elson, being a feminist means refusing to let women be told how they are allowed to live their lives.

“Abortion rights and healthcare and reproduction rights are being called into question ––we are still working our butts off to defend our rights,” Elson said. “It sucks not being able to do what I want because of perceived gender construction.”

According to Rahman, an essential part of being an activist is finding your voice.

“Having your voice heard is [important] especially for teens,” Rahman said. “Being a teenager often is a time where people don’t listen to you and it shouldn’t be that way. To be an activist and to be asking for things and using your power is really nice.”

Elson is not the only Redwood student who chooses to confront world problems through activism.

Junior Lily Kane-Dacri is an active member of the Amnesty International Club at Redwood, which campaigns for political human rights issues in order to bring awareness to global human rights violations.

Former president and now treasurer, Kane-Dacri said she’s an activist because she believes it’s her duty to try to fix the problems she sees in the world.

Kane-Dacri said that being born in China makes her more interested in learning about international events.

“I know a lot of my friends don’t even know what’s happening in the world and I think it’s really important to become an adult who understands the full picture,” Kane-Dacri said. “I think it’s just being educated, bringing awareness to others, and being involved. I really feel a part of some of the issues, especially in China. I think that’s one of the reasons why I’m really drawn to foreign human rights violations.”

According to Rahman, the amount of information available nowadays makes it easier for teens to be more informed on what is going on in the world.

“Even if you live in Marin County, you can see what’s going on in Ferguson or in Oakland where there’s police brutality,” Rahman said. “Maybe that makes you angry so maybe there are ways that you can get involved with Black Lives Matter,”

“We write letters to governments saying, ‘Hey, we’re out here and we see what you’re doing and it’s wrong,’” Kane-Dacri said.

“I think there’s a very small percentage of youth who actually understand what’s happening and those small groups want to do something,” she said.

According to Kane-Dacri, being an activist is about being educated, bringing awareness to others, and being involved.

Yet, according to Barr, when activists make change in their communities, they are not only affecting those around them––they’re increasing their own senses of belonging.

Along with a sense of belonging, a mental and emotional benefit can be gained through activism, according to Rahman.

“Doing good work is karmically good for people,” Rahman said. “If you do any sort of work where you volunteer or help in anyway you feel good inside. That gratification is something that feeds people and gets them interested in doing activist work.”