Off the Grid is not off the mark 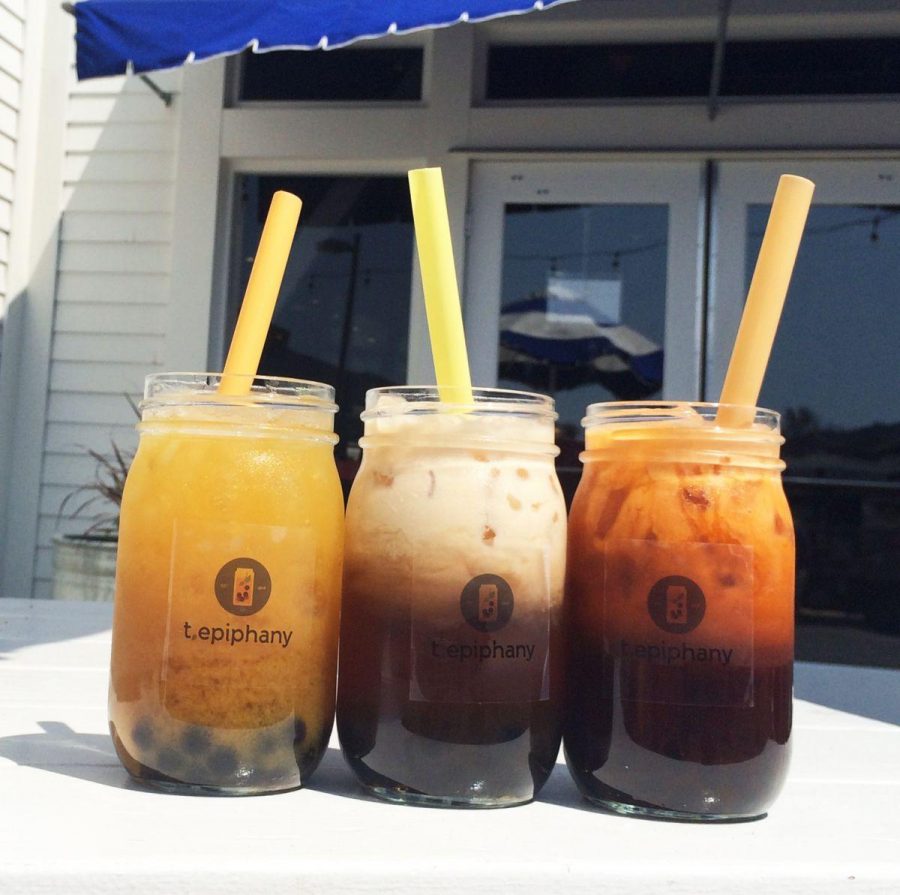 Boba teas from T.Epiphany which cost $5 with boba.

Off the Grid has been bringing their food trucks, one of the most popular food trends, to the Marin Country Mart across from the Ferry Terminal for the past four years. With seven or eight different food trucks each Sunday from 11-3 p.m., the Bark compared foods from four different trucks: The Taco Guys, Bacon Bacon, Lobsta Truck and T.Epiphany. The food was reviewed on taste, affordability, and speed of service.

The Maui Fish Taco was small but densely packed for $6, which was somewhat pricy. It was bursting with many different flavors and had the perfect balance of spices and salt from the pickled cabbage on top. Fresh ingredients were plentiful and the fish was still warm, which was a nice touch. However, the taco was too messy and sauce was constantly dripping. The “spicy” lemonade was refreshing, but lacked spice and tasted more like a strawberry lemonade with a slight twist. The Taco Guys had the fastest service and the employees happily gave food recommendations, an added bonus.

By far the most popular food truck at the Marin Country Mart, Bacon Bacon specializes in everything bacon, even offering chocolate covered bacon. The Bacon Grilled Cheese was thick, delicious, stuffed with lots of bacon, and definitely worth its $8.50 price tag. The bacon had a subtle, sweet flavor and was very thick and meaty, unlike your average salty bacon. However, the L.G.B.T (Lettuce, Goat cheese, Bacon, Tomato) sandwich was not as good as the grilled cheese as the bread was too thick and overpowering. Because of its popularity, Bacon Bacon had the longest line and slowest service.

The Lobsta Truck offers traditional New England seafood such as lobster rolls, crab rolls, clam chowder, and lobster bisque. The Lobsta Roll was filled with delicious fresh lobster meat from Maine. However, the roll itself lacked flavor. For $14, the roll did not have enough lobster but more meat was available for an additional $6. The Lobsta Roll was in no way worth $20 and the service was average. The $4 whoopie pie was the most disappointing part of the meal as it failed to have any flavor, was soggy, and came out of a plastic bag.

Serving iced, hot, and boba tea, T.Epiphany provides refreshing drinks to go along with lunch.  The teas were not too sweet and did not taste artificial, unlike many other boba teas. Among the highlights were the earl grey tea and the thai tea. Priced at $4.50 with an additional $0.50 for boba, the teas were rather expensive for their serving size and you seemed to be paying for the experience of feeling cute ordering from a chic tea truck. The tea was served in trendy Mason jars, and if customers bring their jar back they get free boba or a different topping on their next purchase.