Leave it all on the course: A dare motivates senior athlete to run San Francisco Marathon 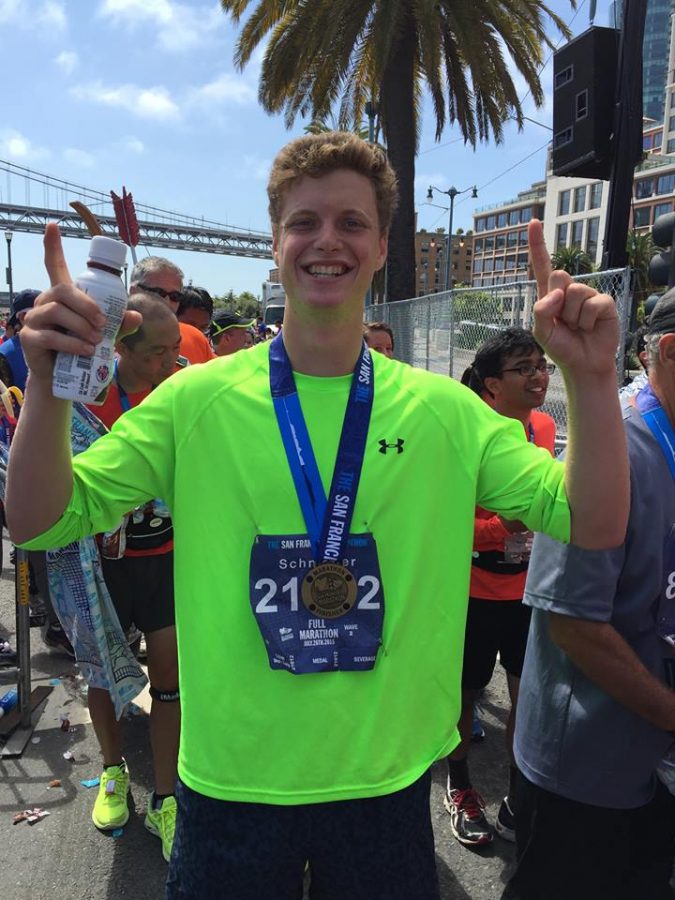 Celebrating his completion of the marathon, senior Cole Schneider smiles for the camera while sporting his new medal.

Sweating, aching, and yearning for the finish, his feet trudged along San Francisco’s hilly streets at 6:30 a.m. on Aug. 23 for the 38th annual San Francisco Marathon.

In a sea of over 25,000 runners, senior Cole Schneider, number 10987, was spotted in the crowd, wearing a neon green longsleeve shirt and blue running shoes. He was 10 miles into the 26.2 mile marathon.

His pre-run meal consisted of scrambled eggs and peanut butter, and seemed to be working for him.“I ended up running it because of a bet with my uncle. He dared me to run it and I had to beat him out so I ran it. Of course he didn’t run it though, so it was just me,” Schneider said.

According to Schneider, unlike most other competitors, he hadn’t trained before running the marathon. As future Olympians were racing down the streets of San Francisco alongside Schneider, there were also many other runners who were not professionals.

This was the first year the San Francisco Marathon was officially sanctioned as a USA Track & Field qualifier race for the 2016 Olympic Team Trials, though no runners qualified for the Olympic trials.

“At the start, there was just a huge mob of people around me. There were people on the sides spectating too,” Schneider said.

Even though he lacked months of training that many competitors possessed, he persevered towards the finish line.

“I kept thinking when it would be over and looking for the finish line,” Schneider said.

Schneider had his phone in a running band around his arm to see how many miles he had left, but there were also signs along the way.

“It was quick. I wouldn’t stop for water. I would just grab a cup and keep running,” Schneider said.

Schneider said there were other stations along the way providing multiple services with trainers and food.

“In the beginning I drank a lot more water, but as I started getting farther along I could feel the water in my stomach, so it was hard to drink more,” Schneider said.

This was Schneider’s first time running a marathon. “It was a mindblowing experience,” Schneider said.

Hours later Schneider stood at the finish line caked in sweat and keeled over. The race was finally over. “By the end I was done. I was unbelievably tired,” Schneider said.

Schneider felt he was mentally “ready” to run at the start of the race, but as time went on, his emotions quickly changed.

“It’s definitely hard with no training. I could feel it all over my body. Just a little bit after the start I was dying,” Schneider said.

“They also had space blankets which I wrapped around me to keep myself warm,” Schneider said.

As one’s body temperature drops significantly while running, space blankets provide as a source of warmth for the competitors after the race. Schneider had to use the space blanket for about 20 minutes to reheat his body.

Once Schneider got home, he felt tremendous pain. “I couldn’t even walk. It was one of the worst feelings you could think of just all over your body,” Schneider said.

According to Schneider, it took him a week to fully recover after the event.

“There were just tremendous aches and pains all over, so I just sat on the couch and watched a lot of Netflix,” Schneider said.

Aside from the temporary pain and fatigue, he is proud to say he completed the San Francisco Marathon.

“It was one of the biggest accomplishments I have done. My family, and especially my uncle, was impressed,” said Schneider.

Schneider is not sure if he has his sights set on running the marathon again next year, but if he does he will prepare in advance.