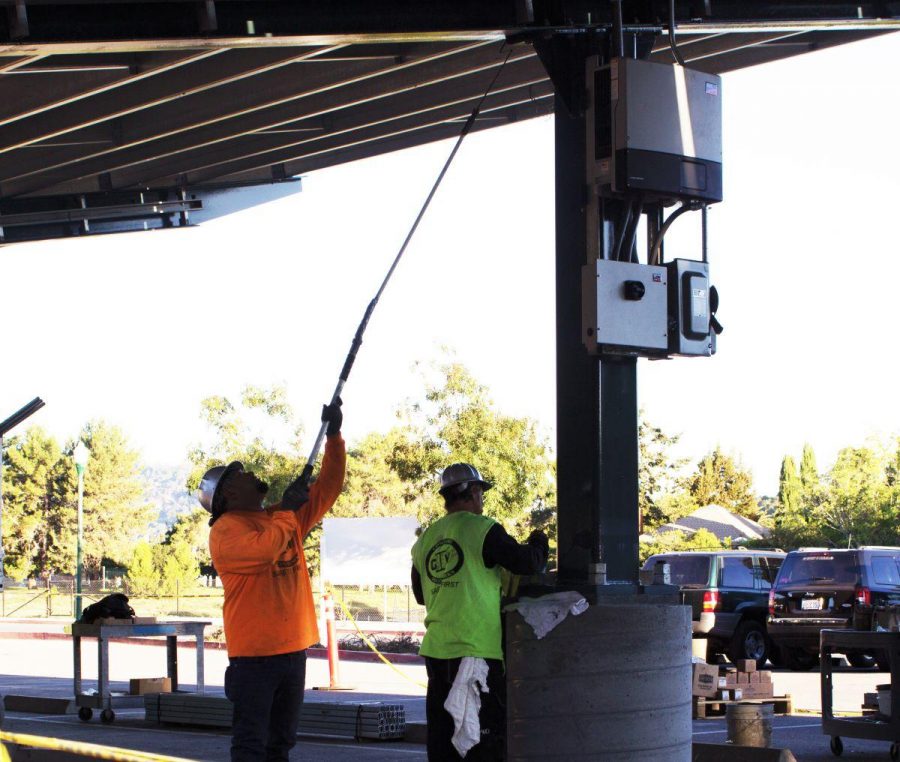 On March 10, 2015, the Tamalpais Union High School District was granted permission by the Board of Trustees to begin building solar panels in the East and West parking lots.

After months of consultation and legal work, the TUHSD signed a contract with SunPower Corporation for carport solar photovoltaic installations on March 10, 2015. SunPower controls the design, method, techniques, and procedure of the project, as well as the engineering of the solar panels and the overhead structure.

The total cost of the project is almost $3,500,000. The TUHSD received $600,000 from bonds passed by the public in 2006, according to a presentation from The Public Financial Management, Inc. (PFM), a company hired to be the financial advisor to the district.

Sondheim said that the TUHSD currently has the opportunity to pay for the project in cash, or else they could buy a lease for the project. Assistant Superintendent Finance and Facilities Sally Swan stated that the District has opted to purchase a 10.5 year lease.

Principal David Sondheim stated that the TUHSD has the possibility of obtaining $160,000 for the project from Proposition 39, the California Clean Energy Jobs Act. With those funds, the TUHSD needs approximately $2,700,000 more to finance the project.

Additionally, the school will receive about $120,000 a year for three years from Prop 39, according to The PFM Group’s presentation.

The 2006 bond money will fund the initial payments, according to the Power Purchase Agreement, an agreement that defines the terms of selling electricity and the finances of a project. The District will pay for energy delivered by the solar panels during a period of 20 years, and included in the payments will be the sink fund payments.

According to California Government Code, public agencies may only sign a contract with a private energy conservation company if the public agency’s governing board decides that the cost of receiving energy from a public company, which is the default source, would cost more than buying energy from the private company, the other option that’s being considered.

The Public Financial Management, Inc. (PFM), a company hired to be the TUHSD’s financial advisor, examined the district’s energy needs and concluded that installing solar panels would reduce the use of nonrenewable energy in the district and lower electricity costs.

The project is estimated to produce almost 34 million kilowatts of solar production in the next 25 years, which would save the District more than $10 million in the same amount of time. The District has also been advised by PFM to invest a total of $100,000 in a sinking fund, which is an account to save money for future predicted use, such as reparations or replacements at years 11 and 21, according to the PFM’s presentation on Aug. 11.

The TUHSD is to pay SunPower every month for the work that was completed that month, as outlined in the The Engineering, Procurement and Construction Agreement. The price will be determined by multiplying the amount of work completed each week by the percent of the contracted price allocated to those tasks. However, 5 percent of each invoice will be withheld until the completion of the project, when the sum will be turned over to SunPower. The entire project will take 11.5 years to pay off, after which the TUHSD will own the structures.

The district is expected to pay roughly $2.7 million for the project, in addition to $40,000 in closing costs, adding up to almost $2.75 million.

The Board of Trustees will be discussing plans on when to install solar panels in the East parking lot on Tuesday, Sept. 8.