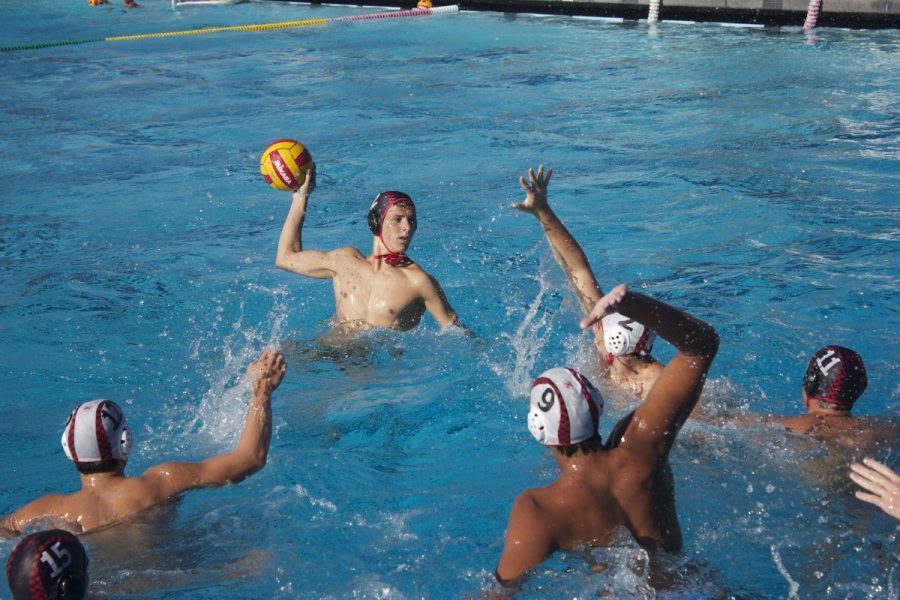 After their dual MCAL and NCS wins last season, the boys’ varsity water polo team approaches this season with mixed emotions. The beginning of the season, although exciting, has been an intense snap back to reality. Many returning varsity athletes are starting to realize that they lost more than just their starting lineup, when over half of the team graduated last season.

“They knew each other so well and they were friends outside of polo, whereas I’m only friends with a couple of the guys on the team outside of polo. We just don’t have that connection,” Edington said. “Last year, they knew what the other player was going to do from the moment they passed them the ball. This year it’s kind of a crapshoot.”

Edington attributes this impressive team chemistry not only to friendships, but also to experience. Many of the key senior athletes on last season’s team had been playing water polo together for years. This season, on the other hand, he expects to be starting alongside players with whom he has never engaged.

Junior Francesco Cico, a returning varsity athlete, said he already feels the loss of key players, including his older brother Giorgio Cico. Despite sharing Edington’s bittersweet feelings, he hopes that with the right kind of leadership, the team will have the opportunity to build up to where they were last year.

“Last year, we were really good. [The graduated seniors] were at the top of their level and established a great work ethic and they had been playing for a while together so they had good team chemistry,” Cico said.

According to Cico, players such as junior Wyatt Barker, who step up and take leadership roles, will be key factors for this year’s success.

“I’m really there just to make sure the team’s doing their best at all times,” Barker, first year varsity player, said.

According to Barker, Cico exemplifies leadership qualities as well by being verbal and building up team morale during practice.

All three varsity players share a fear of Drake’s team this season, and what the Drake athletes are capable of achieving. Although Redwood beat Drake 9-6 in the MCAL championship game in the 2014 season, Cico doubts that a win against this year’s team is attainable.

Cico attributes this prediction to his intimate relationship with the Drake varsity players, and his first hand experience playing alongside many of Drake’s key players on their Sleepy Hollow Aquatics (SHAQ) club team this past off-season.

Cico, as well as Barker, has been playing with the same group of boys for many years on the SHAQ team, under Drake’s head coach Matt Swanson. This summer, the club team won third in the Junior Olympics, resulting in a national ranking.

Cico said he thinks next year the SHAQ team should be able to win it all.  Cico and Barker have witnessed their SHAQ teammates’ incredible skill and said they are definitely afraid to face them in the high school season, even though most of their key players are just entering sophomore year.

Cico and Edington are in agreement that this will be a developmental year for the team, as they will have to focus on team chemistry as well as physical skill.

According to Edington, the team is physically built but much smaller than last year’s players.

In an attempt to compensate for this difference, this season’s team puts an emphasis on swimming during practice to increase speed and stamina. Edington predicts their tactics will have to be different and they will have to play smarter.

A lot of the weight will also fall on Coach Rudy Kardos’ shoulders. Kardos won MCAL Coach Of The Year last year, after successfully taking Redwood’s team from the bottom of the barrel to the top.

According to Barker, Kardos is already pushing the team to its best.

“He’s really made sure that we’re in shape and that we’re ready to go on game day, which is really important,” Barker said.  “You don’t want to come off the bench flat or lackluster. He’s definitely improved the team.”

Despite the differences in this year’s team, Edington still expresses high hopes for the season to come.

“I think the seniors have the mentality that this is our last year together––we’re doing this to have a lot of fun together. We’re aiming to win MCALs again, and that’d be awesome, but I’m just happy to be with my team one more year,” Edington said.

In addition to emulating the tenacity, chemistry, and mental game of last year’s team, Edington hopes to strive for his additional personal goals.

Since Cico, unlike Edington, does not have to say goodbye to high school water polo after this year, his season goals are geared more towards long term outcomes.

“I just want to rebuild the program because it kind of took a hit with all of the seniors leaving. Obviously I want to do really well this year too, but also build it up for future years,” Cico said.

The team played their first game of the season on Sept. 9 at Las Lomas High School.  They will participate in the John Schmidt Invitational this Friday and Saturday against Bellarmine High School.