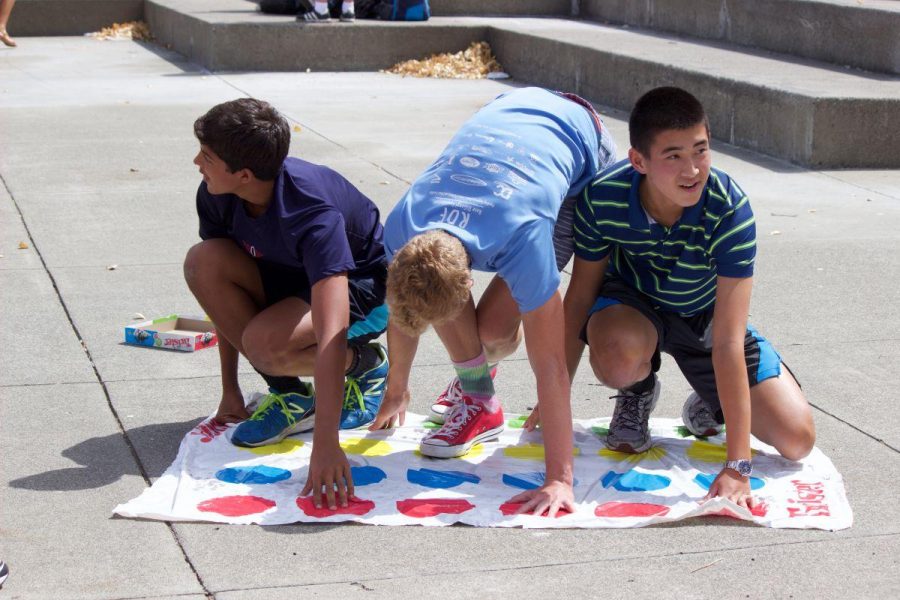 On Friday August 14, 87 upperclassmen Link Crew leaders gathered in the gym to prepare for Freshman Orientation, a day designed to introduce the 493 freshmen to the school, with activities and conversations ranging from locations of classes to academic and social advice, to implementing the new “housing” system for the students.

Link Crew teachers Erik Berkowitz and Katie Slattery have created four “houses,” and each house is made up of five “mentor groups.” All current freshman students and future incoming students will be placed into a certain house, or grouping of students, and will remain with that house throughout all four years at Redwood.

Additionally, each mentor group is comprised of 26 freshman students, four Link Crew leaders, and one teacher.

The groups will meet eight to ten times throughout the year to check-in with students regarding their academic, social, and emotional growth and well-being.

There are four houses in total, each named after a specific destination in Marin: The Beach House of Pt. Reyes, the Bridge House of the Golden Gate, the Tree House of Muir Woods, and the Mountain House of Mt. Tamalpais.

“One of Link Crew’s main goals was to try to create more of a community feel at Redwood. We started to see that there was a lot of divide between the grade levels, so what we wanted to do was not make it so segregated and try to mix kids together more across grade levels,” Slattery said.

Slattery and Berkowitz believe that if students begin to mix across grade levels, the overall social culture at Redwood will change dramatically, to become a more inclusive student body.

“We see a little bit of that collaboration with Link Crew when we have upperclassmen helping underclassmen, and we are trying to build that bond, so now we’d like to add in other grade levels as well,” Slattery said. “One thing we talked about is if we can start to change the attitude and culture early on, then maybe when we are all together, it won’t be as divided.”

The housing system started with the current freshmen, the Class of 2019, and within the next four years, will become a “naturally occurring” phenomenon, according to Slattery.

Berkowitz and Slattery used a software program made by Link Crew to organize and sort students across feeder schools and by gender, ensuring evenly distributed houses.

Berkowitz added that he sees a lot of potential for personalization within the new housing system.

“I think the most fundamental, most basic [goal] is to have kids feel more connected to each other and to the school. But once that happens, when you feel comfortable in a group, you’re then more free to do all kinds of other things,” Berkowitz said. “There are conversations at a larger systemic level, but because it’s new, we’re just kind of waiting and seeing what percolates.”

Senior Jessica Flaum has been a member of the Link Crew class for two years, and believes that the housing program is a positive adjustment to the social culture at Redwood.

“The idea is that once these freshmen become seniors, all the grades will be in a house, and it’ll be a unifying mix of freshmen and seniors into this house, instead of just grade level,” Flaum said.

Flaum also said that meeting multiple times throughout the year with the mentor groups and Link Crew leaders will be beneficial to continuing relationships over the entire year, instead of just at Freshman Orientation.

Berkowitz added that with the use of Instagram accounts and Facebook pages, the freshmen will be able to stay in communication with their Link Crew leaders and mentor groups about events, meetings, and activities.

“Every Friday at lunch, there’s going to be an event, and we are hoping to gear them more so that anybody who happens to be on campus may want to come, instead of just for the freshmen,” Berkowitz said.

Slattery said that the Friday “mini-events” will be casual, including activities such as lawn games and face painting, but the Link Crew class will still be putting on some of their larger events such as Cocoa and Cram and Hot Dog Day.

According to Slattery, even if all the ideas for the program don’t fully pan out, she and Berkowitz would still have achieved their fundamental goal of making more connections and making Redwood feel like a smaller community for new students.