Tennis winds up to start season with an ace 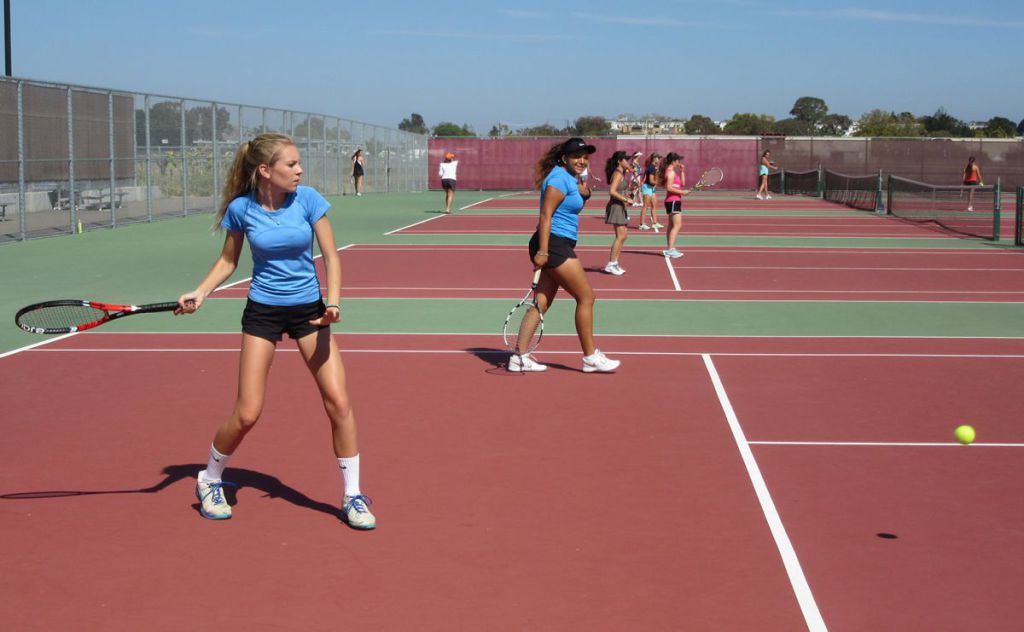 Sophomore Devon Cusak prepares to return the ball during practice.

The girl’s varsity tennis team looks forward to exploring group chemistry and developing good doubles in the coming season despite this year’s reduction in player numbers.

Out of the 41 players who tried out, 20 made the team, bringing in two new freshmen as well as one junior who transferred back to Redwood from Saint Ignatius this year. The team had to drop from 26 to 20 players due to limited coaching and court space.

“It’s just hard to turn away people that are interested in playing. Unfortunately we only have six courts. Last year we kept 26 girls and it was very difficult to manage play time. Anything really over 16 gets really tough,” said coach Marlies Zeisler.

According to Zeisler, there are no plans of expanding the tennis program. Doing so would mean that every tennis program in the league would also have to expand, so that each team has an equal level opponent.

Junior Natalie Epstein said that tryouts were based on ten-point tiebreakers, in which the coaches record scores and look for skill in the players.

According to junior Alexa Mizenin, in previous years when there were too many players, each player would have to take turns using the small number of nets and would sometimes have to travel to Piper Park to use the extra tennis courts.

“Last year there was always an uneven number and some of us would have to work out between the courts, envisioning the net, just playing on the red part of the court. That was hard,” Mizenin said.

Coach Zeisler believes that it’s possible for a practice to just consist of drills, however the players who make the team need actual playing experience on the courts to improve.

“When you only have six courts you need one court for singles players, that’s just two girls on a court. We can run drills and do ten to twenty people on a court, but they really need the playing experience. That’s what really makes them good competitors,” Zeisler said.

Epstein feels that having a smaller team has already changed the social dynamic.

“I think girls are getting to know each other better. We get to play more people because we can spread out more and everyone can talk to new people,” Epstein said.

Mizenin felt that having a smaller team was advantageous because the smaller the number of people, the more time the coaches can spend with each player. This way the players have more personal time with the coaches to work on their weaknesses and build upon their strengths.

“A big strength we have is that everyone enjoys playing and they work really hard at practice. Everyone who’s there wants to be there, which leads to a not only hard-working team, but a happier team as well,” Epstein said.

Zeisler believes that this year, the whole team is composed of very strong, talented players.

“We are very deep this year. We are going to go far with depth. We have a lot of skill all the way down to number twenty down the ladder,” Zeisler said.

According to Zeisler, though their depth may be good, the group’s goal this year is to work on their number two and three doubles teams, volleys, and overheads.

To make a good doubles team, the coaches pair together two players who have excellent communication and chemistry.

“You really need one leader on the doubles team. You need one person who’s really going to kind of take control and help the other person. You need to have a great net person and potentially a great ground stroker to set up the net person. Communication is huge in doubles,” Zeisler said.

The team’s first home match was on Tuesday, Sept. 8 against San Marin.