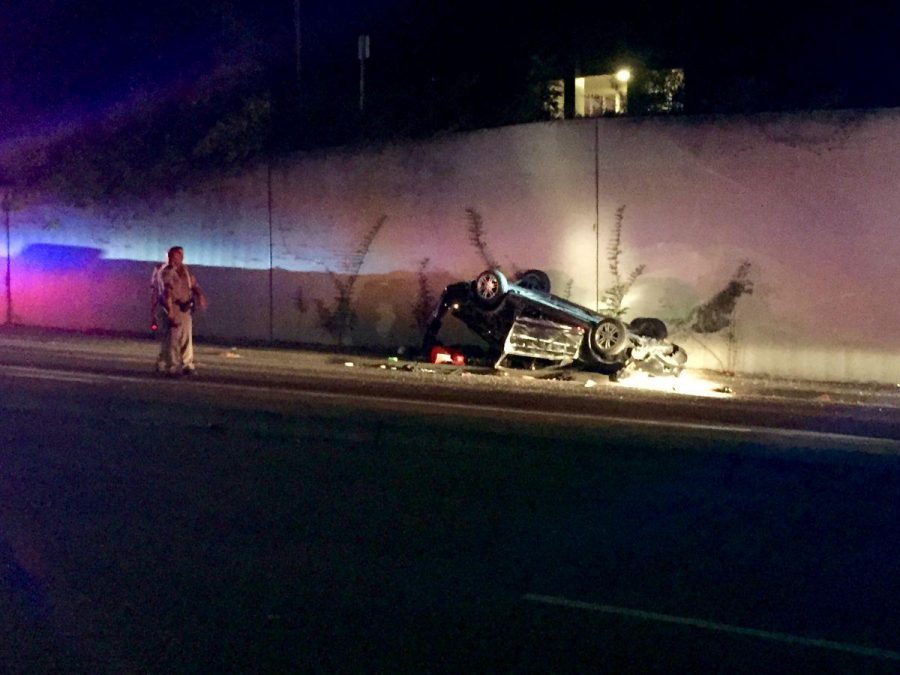 The unidentified driver's vehicle was flipped upside down after being chased by multiple police cars on Sir Francis Drake Blvd. Police suspected the driver of potential psychiatric issues due to his behavior on scene.

A police chase that began in Fairfax and proceeded all the way down Sir Francis Drake Blvd. ended with the driver’s vehicle flipping upside down at approximately 12:30 a.m. this morning in front of Marin Catholic High School.

The suspect, whose identity has yet to be confirmed, escaped the wreckage and attempted to flee the scene on foot before subsequently being detained by police officers.

Officer Michael Lappert of the Central Marin Police Authority was on scene at the time of the arrest.

“The chase started in Fairfax with the driver running a traffic light and not yielding to a police officer,” he said. “As he drove through San Anselmo and Ross, more officers were getting involved until there were about six or seven cars pursuing him.”

According to Lappert, the driver was speeding and driving on the wrong side of the road until he lost control of the vehicle and destroyed his car next to an embankment outside of Marin Catholic.

“The car was left looking unrecognizable,” Lappert said. “But the driver left with only a bruised elbow and a scratch on his forehead.”

The driver was immediately taken to Marin General Hospital for further treatment.

Lappert said that the suspect’s behavior as he was questioned by officers at the time of the incident suggested to police that psychiatric issues could have been a factor in the reckless driving.

The officer did not cite any explicit indication of drug or alcohol use on behalf of the suspect.

No one else was injured at the time of the crash.