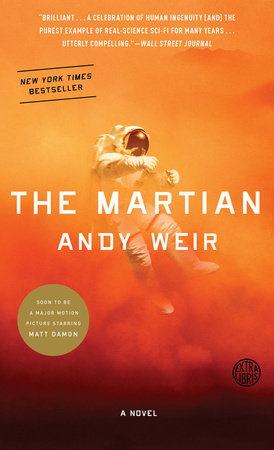 With the release of the feature film adaption of “The Martian” coming next month (October), the Bark decided to review the 2011 book by Andy Weir.

The book takes the reader on a wild ride through protagonist Mark Watney’s ordeal as the “last man on Mars.” After a sandstorm hit his team’s home base on the red planet, he was left to die, as the other astronauts narrowly escaped via the only spacecraft home. The rest of the book follows Watney’s struggle to stay alive on an unforgiving planet.

Good news: He has enough food to last 400 days on Mars. Bad news: The next mission back to Earth isn’t for another 1,650 days, and no one back on Earth knows he’s alive.

One of the novel’s unique draws for frequent sci-fi readers is that it takes the time to accurately detail the science behind the protagonists actions in a witty daily “log” format. Watney’s long, scientifically accurate logs of his fight to stay alive on Mars are written with a dry sense of humor that make even rocket science bearable and interesting.

The book switches settings between Watney on Mars and the NASA headquarters back on Earth, where a lower management engineer first spots something awry on the supposedly empty red planet. The whole world becomes united in the fight for Watney’s life, seen through the frenzied micromanaging of NASA public relations manager Annie Monrose while she attempts to spin the near-tragedy in their favor.

The Martian gives the reader a peek into the high stakes but bureaucratic world of privatized space exploration, and the trails of fast paced advancements into the unknown world of interplanetary rescue missions. I found the portions of the book dealing with the rest of the world’s reaction to Watney’s predicament to be the most interesting, as it peered behind the curtain of the final frontier.

A big debate for Watney is whether to stay safe or stay alive. Watney constantly puts his own life in danger when he  experiments with scraps from leftover spacecrafts to separate rocket fuel into water, or to extend the range of his rover with the hope of making enough food and water to survive for the next few hundred days.

At a relatively short 369 pages, “The Martian” is a quick read that I didn’t want to put down––the suspense of Watney’s ever evolving tactics for survival kept me on my toes.

If you read this book soon, you’ll be able to appreciate the movie version when it comes to theaters on Oct. 2. The movie stars Matt Damon, also seen stranded in space in “Interstellar.” Ridley Scott, director of the great science fiction hits 1979’s “Alien” and 1982’s “Blade Runner,” is leading the book adaption into theaters, and into the hearts of sci-fi fans everywhere.