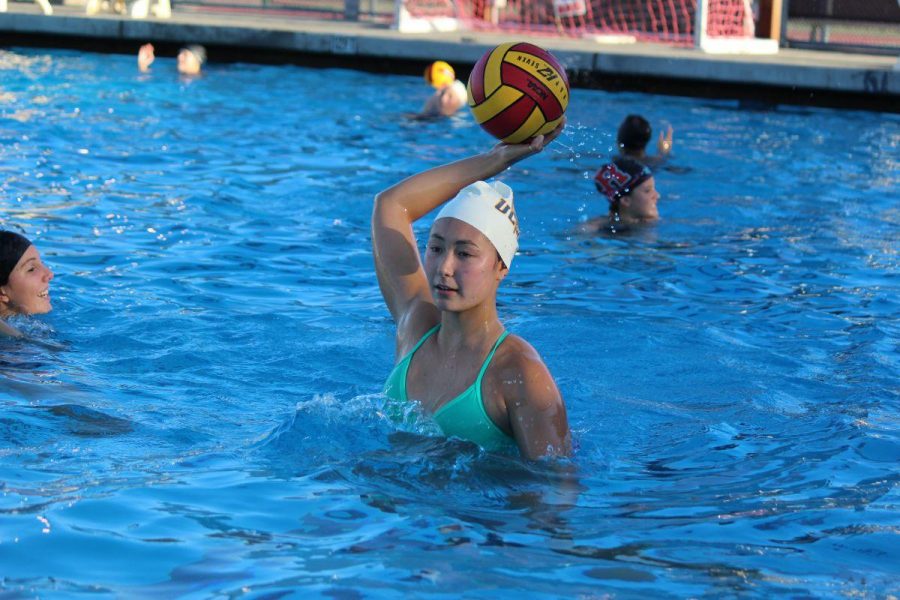 Junior Jennifer Kieffer passes the ball to a teammate during practice on Sept. 9th 2015.

After a 15-11 season and a sixth place finish in MCAL, the girls’ water polo team will look to improve their conditioning and teamwork on offense as they head into the 2015 season.

The team, led by last year’s leading scorer senior Jennafer Schoonover, will try to build on its momentum in league play after finishing the regular season with two straight wins and a playoff appearance despite not making it the previous year.

“Our team is currently being infused with new talent,” junior Courtney Morris said. “In 2013, we had 12 girls [on the JV team]. All of them were freshmen and all had basically never touched a water polo ball before. We barely had any [substitutes]. It was difficult to play tournaments because of it,” Morris said.

Senior Charlotte Montoya feels confident that the team will be restocked with new talent and will still be competitive when the seniors graduate.

According to senior Katie Isaacson, many members of the team have played together for four years.

“We have a lot of seniors, 11 to be exact, which, along with the fact that a lot of us played club water polo, will definitely help us,” Isaacson said. “Our counter attacks, swimming and hole set, which is our main goal scorer who is positioned in front of the net, are probably our biggest strengths.”

Despite these strengths, the players know they need to continue to work hard.

“Our main goal is to work more on our plays and come out strong. We are especially working on our conditioning. Because if you can outswim the other team, you don’t necessarily have to have the skills to beat the other team,” said junior Alicia Vargelis.

Coach Kirsten Frazer, who has been Redwood’s head girls’ water polo coach for the past two years, is confident in the team’s potential this year.

“The thing that sets this team apart from other teams in the league is that the team is really eager to learn. The team’s eagerness will hopefully not only develop this current team, but will carry over to others,” Frazer said.

According to Frazer, the team is not focused on beating one team specifically, and they prepare to play every team with the same intensity. Currently, the team is most worried about getting ready for the season and working on their offensive fundamentals.

Though the team may not be focused on beating one team, the team is definitely looking at their opener against Marin Catholic.

Though the team may not be foucused on beating one team, the team is definately looking at the ir opener agaisnt Marin Catholic.

The team kicks off its season on Thursday, September 17 against rival Marin Catholic at Redwood at 5 p.m.