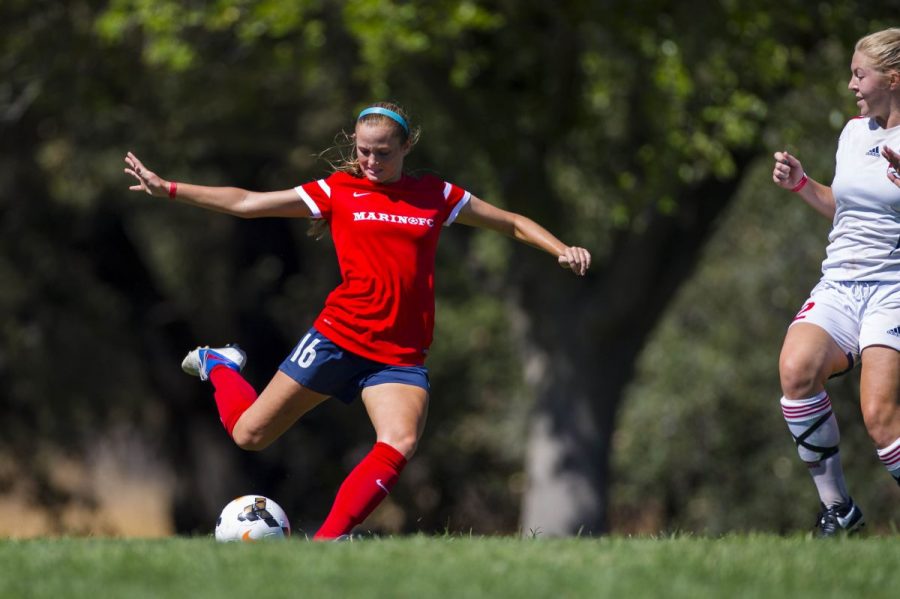 Ever since she was little, sophomore Lauren Foehr knew exactly what she wanted to do.

“From day one, I’ve always wanted to play [soccer] in college, so wanting to play at a college level is what pushed me through the years to keep playing and practice as hard as I do,” Foehr said.

Foehr accredits her success on the field to her drive to play at a higher level, from making the Redwood varsity team her freshman year to qualifying for the Olympic Development Program (ODP) that same year.

The ODP is an national organization which identifies a pool of youth soccer players to form a national team with the purpose of competing at an international level.

“Over the summer, you train and meet all the girls and then go to a really big tournament that lasts about a week and a half,” Foehr said. “In eighth grade, I tried out for ODP and didn’t make it, and then I tried out again my freshman year and made it all the way to the regional team.”

“The speed of play in ODP is faster than anything I have ever done before,” Foehr said. “Although it gets difficult playing with girls from all around the country who are all pretty intimidating, I try to pretend like they are like any other girl on my club team on and off the field so I don’t psych myself out.”

From her regional team to her her high school team, Foehr has already left a lasting mark on the field.

“From her first time walking on the field, I could already tell that she made a positive impact on the team,” former Redwood teammate Chace Schornstein said.

“[Foehr] is very technical with the ball; just by playing with her you can tell that she already has a lot of knowledge about the game,” Schornstein said. “I was only able to play with her as a freshman, and I know she has so much more time to grow but given that she already was a strong player, the sky is the limit for her in the future.”

As attacking midfield, Foehr distributes the ball to the other players on the field and sets them up to score, but ever since key seniors Schornstein and Sally Elton graduated, Foehr has taken on more initiative on the field, leading the team with a total of five goals this season.

“Now, I see myself as a person who takes the ball forward more,” Foehr said. “I felt like with all the seniors gone, it was on me to take the role of key players like [Schornstein] and [Elton]. I also took it upon myself to improve as a player, not only with becoming a better ball distributer, but also scoring more,” Foehr said.

Foehr currently leads the team with a total of five goals and five assists.

“This year, Lauren has really risen this year as a key part of the team,” varsity coach Mattias Kodzoman said. “With all the seniors gone, she has become a teammate that the rest turn to because of her skill and personality. Not only is she an incredible athlete, but she’s also very humble, too, which is rare to find in someone with that caliber of skill.”

Although a lot of her success on the field has come from hard training and her love for the sport, Foehr says she wouldn’t be at the level she is now without her family’s support.

“My family knows that soccer is something that I want to pursue in the future and fully support me. They let me go to crazy tournaments and camps and are always in the stands to watch me play,” Foehr said.

Foehr is currently in the recruitment process with Division I schools, but has chosen not to share which ones until she makes her final decision.