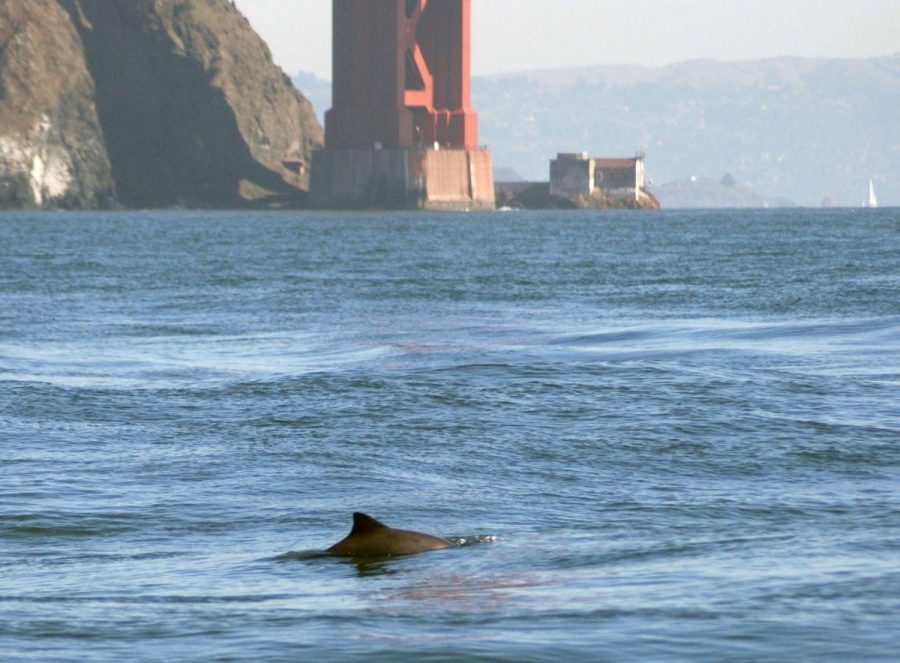 After nearly 65 years of sparse sightings, hundreds of Harbor porpoises are back in the San Francisco Bay, researchers found.

“It’s like having a new top predator in the bay,” said Bill Keener, marine biologist at the Golden Gate Cetacean Research, a cetacean research organization, and former Redwood parent. “It’s not just one or two but like a hundred or two hundred are coming in and out of the bay at a time–that’s a massive change.”

Porpoises were first sighted in early 2008 and took researchers by surprise, Keener said.

There is no definitive reason for the porpoises’ return. However temperature decreases in, and the improved cleanliness of, the San Francisco (SF) Bay may have attracted the porpoises back, Keener stated.  Another possible attractor is the recent increase in the bay’s anchovy populations, a main food source for porpoises.

The porpoises’ return will not only affect the bay’s ecosystem, but the ocean floor itself.

“If each porpoise is eating several pounds of fish a day and there are hundreds of porpoises, that is thousands of fish per day being impacted,” Keener said. “They are eating fish in the bay, then we see a lot of them leaving the bay, and they might defecate in the ocean and fertilize the ocean.”

It remains to be seen what effects this will have on the greater ecological system, Keener believes.

“There are lots of fish in the bay; fish populations are relatively healthy in the center of the bay so there isn’t a real concern of damage. But [porpoises] are using the bay in a way it hasn’t been used for quite a while,” Keener said.

Porpoises will also have more violent interactions with Bottlenose dolphins as they encroach on the dolphins’ territory in the SF Bay.

“They are meeting more Bottlenose dolphins and are having more negative interactions with them–sometimes the dolphins end up killing the porpoises,” Keener said.

“Porpoise rescues are pretty rare. Unfortunately I have never been able to work with a porpoise because they always die during transport to the center,” Poyner said. “It is not the fault of the transportation, it’s just that they are usually so injured to the point where nothing can really be done.”

With a resurgence in the bay’s porpoise population, marine biologists are delving into new experiments.

“For instance, we don’t know what [porpoises] are doing in the night. With thermal imaging and infrared cameras we are going to record their whereabouts,” Keener said. “We are also going to experiment acoustically with high frequency porpoise clicks.”

Thus far, Keener’s and his colleagues’ observations have resulted in the first comprehensive image database of this species.

Why the porpoises left: A look back into SF’s wartime and environmental history

The porpoises disappeared during World War II, when the U.S. Navy stretched a seven-mile-long steel net across the mouth of the San Francisco (SF) Bay to stonewall enemy submarines.

The steel mesh consisted of four by four steel squares layered with smaller, connected rings. The squares thwarted submarines while the rings kept out torpedos, according to The California State Military Museum.

Although an effective military tool, the torpedo rings inadvertently trapped porpoises inside the SF Bay and kept the ocean’s porpoises out of the area, Keener said.

“This thoroughly disrupted the porpoise migration patterns, since they rarely stay in one area for very long,” Keener said. “Also, the Golden Gate Bridge, a key mating ground for the porpoises, was now on the ocean side of the net, making it inaccessible for many porpoises.”

The net, created by the former Naval Net Depot in Tiburon, was removed from bay waters once World War II ended.  In those four years of war, the porpoises not trapped inside the SF Bay were long gone, and likely inhabited the Gulf of the Farallones, according to Keener.

“The steel mesh would make incredibly loud sounds in the water which scared the remaining porpoises away from the Bay Area,” Keener said.

Even after the net’s removal, the bay remained porpoise-free throughout the 50s and 60s, due to the heavy pollution in the bay.

“At this point, no one had invented the concept of restoring habitat. In the 50s and 60s the SF bay was terribly polluted–now it’s way cleaner than it used to be,” Keener said.

The bay is much less contaminated now due to the passage of the 1972 U.S. Clean Water Act and state legislation that led to upgrades in waste treatment. About 35,000 acres of the Bay Area’s tidal wetlands, which help filter pollutants, are now completely restored, according to the California Department of Conservation.

In addition, measures were taken to specifically protect porpoises. In 2002, the California Department of Fish and Wildlife banned the use of fishing nets at depths less than 360 feet, as the nets were responsible for the deaths of over 300 porpoises in the 1980s.

Although The SF Bay is much cleaner and safer for porpoises, nothing is completely solved, Keener said.

“Porpoises are positively impacted by all the abundant food. However the mercury from the mining days in the late 1840s is still getting into the bay fish population and the porpoises are probably getting a hit of that,” Keener stated.