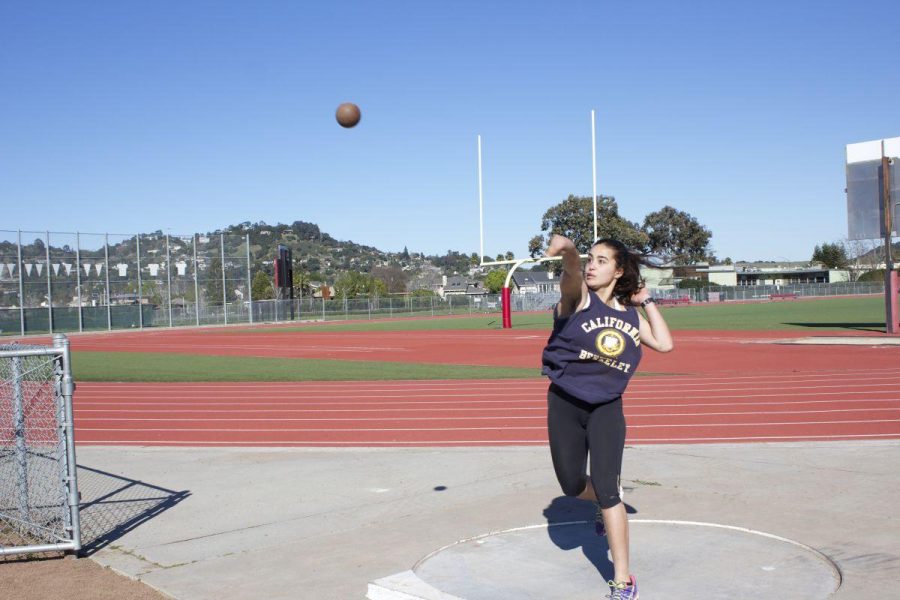 While playing basketball under the florescent lights of the gym last year, senior Tamara Frangoul landed a rebound wrong, causing a third degree ankle sprain and partial tears of her ligaments. Her injury prevented her from participating in track her junior year.

Now unbooted and under natural light, Frangoul is back and competing in the 100- and 200-meter sprints, the 4×100 relay, shot put, discus, and the 100-meter hurdles.

“Doing many events can be tiring because it can be hard to find the time in the day to practice all of them,” Frangoul said. “To practice, I usually throw during seventh [period] and then stay after practice for about an hour practicing more events.”

Her sophomore year, Frangoul placed seventh in MCALS in her preferred event, the 100-meter dash, but is unsure how she will perform this year due to training she had to do to strengthen her ankle.

Because her injury was so severe––Frangoul was in a brace for the majority of the track season last year––she transitioned into shot put. She placed third in MCALs and qualified for the North Coast Sectionals Meet of Champions (NCS), where she placed 22nd out of 24 after only one season of training.

However, Frangoul’s success in field events was not unexpected. Before her injury, she was a competitive track and field athlete participating in high jump, 100-meter hurdles, and long jump. Her sophomore year, she placed ninth in high jump at MCALs, but this year Frangoul is competing more in shot put due to her weak ankle.

Head track coach Laura Schmitt cited Frangoul’s participation in various events and her easy transition to shot put as several aspects that makes her valuable to the team.

“She is kind to everybody and a track team really needs someone who crosses over,” Schmitt said. “She crossed over to the shot put and disc after sprints and everyone loves her. She is just a great teammate.”

Schmitt also said that Frangoul’s versatility as an athlete makes her useful for the team.

“It can be frustrating to be spread so thinly, but the extra time I spend is ultimately for the team,” Frangoul said.

Frangoul’s successful transition to shot put did not come without practice, however.

In preparation for this season, Frangoul ran after school before basketball practice at Redwood and College of Marin. She said her inspiration to do intensive training stemmed from the death of her close friend and Redwood student, Dylan Barry.

“It was right after a basketball game. I had a million phone calls and I thought everyone was just joking and everyone was just doing some cruel practical joke and then it was real,” Frangoul said. “He kind of became my inspiration in training, in doing these things that might be hard, but you have to do them to get better and also realizing that if I died and was speaking at my memorial I want to be able to say that yeah, I worked hard.”

Frangoul also hopes that her participation in numerous events will make her an appealing heptathlon athlete for colleges. A heptathlon consists of the 100-meters hurdles, high jump, shot put, 200-meters, long jump, javelin throw, and the 800-meters.