New recycling policy saves the Earth one bin at a time 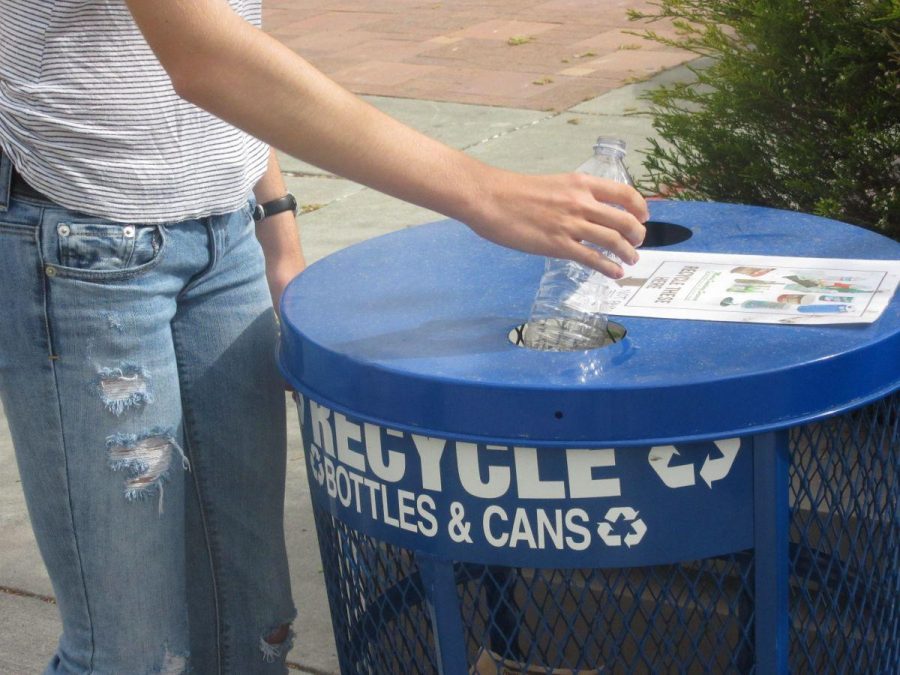 The last time you bought something at the CEA, what did you do with your cardboard tray, milk carton, and wooden fork? If you’re like most students, you probably threw these recyclable items into the nearest garbage can.

Until recently, Redwood had no student-use outdoor recycling bins, making it difficult for students to sustainably dispose of recyclable waste. Senior Bailey Ferguson has worked to change that.

Ferguson, a member of the Environmental Action Club, led the push to bring outdoor recycling bins to Redwood, which recently debuted outside the front of the school. She hopes that the $700 investment in the three new recycling bins will reduce waste and promote sustainability at Redwood.

The current national average for waste recovery, or the amount of waste that is recycled, is 35 percent, out of a possible 82 percent of waste which is recoverable, according to the the Environmental Protection Agency.

According to Ferguson, if Redwood reached its full outdoor recycling potential, students could eventually conserve around 379,200 plastic containers, bottles, and cans each year.

The three recycling bins are placed outside the front of the school and CEA.

“The hope is that if you are three paces in between a recycling can and a trash can, why wouldn’t you go to the recycling can?” Ferguson said.

A recent study by the National Library of Medicine supported Ferguson’s claim, finding that people recycled twice as many plastic bottles when the recycling bins were closer to the place of consumption.

The club received a $700 grant from the Redwood High School Foundation, covering the purchase of three outdoor recycling bins.

“That’s actually cheap compared to how much most _large, durable recycling cans can cost,” Ferguson said of the $700 price tag.

In order for the new recycling bins to be successful, Ferguson said, students will have to work together to make sure that recycling ends up in the correct bins, as it is not the janitorial staff’s responsibility to sort through the bins.

“The hope is that we will be able to get more bins as time goes on,” Ferguson said. “We will start with these three [bins] in case students don’t recycle properly, because in that case we wouldn’t be able to keep the program.”

Redwood is not alone in its efforts to improve sustainability.

Laura McCarty, director of modernization at College of Marin, said that a positive effect of the sustainability efforts was the awareness that the students gain as a result.

“When you have that understanding you can help do something about it. You can make decisions to reduce energy. You can turn off your computer when you leave the lab, and turn off the lights when you leave the room,” McCarty said. “It has a direct correlation to not only the cost that the school pays for its electricity bill, but to the environment.”

Ferguson believes that bringing outdoor recycling bins to Redwood would be a good start towards more sustainability.

“If you buy things at the CEA, they come in a lot of plastic and paper, most of which is actually recyclable,” Ferguson said.

However, before lately, students didn’t have a place, other than the garbage, to put these recyclable materials when they finish their meal.

“Hopefully [Redwood] can reach a decent percentage of waste recovery, and be able to be more sustainable in the future,” Ferguson said.